The noted Ventrue methuselah, Paragon of the Road of Humanity and the prince of Frankfurt, Julia Antasia is an influential player in the world of Cainite politics.

This lady exudes extraordinary gravity and dignity, her dark eyes full of the weight of experience despite her apparent youth. Her skin is very pale, so as to appear quite like a marble statue when she is motionless. She dresses as a German noblewoman, though her hairstyle, poise and choice of jewellery mark her as being out of synchronicity with court fashion.

The ancient prince of Frankfurt is very much an outsider among her contemporaries. Unlike the elders who dominate the map of the Holy Roman Empire, Julia is not a Scion. Instead she walks the Road of Humanity, and many worthy Cainites follow in her footsteps. Indeed, as a Prodigal philosopher of great influence she is a strident critic of the inherent hypocrisies of the Road of Kings. On an individual scale, Julia Antasia is one of the most powerful, or perhaps even the most powerful, elder that remains active in the empire. Erik Eigermann (before his disappearance) might have rivalled her strength, and either Hardestadt or Dominius come close, but none truly have the weight of her years or experience. Alas, both of the latter elders excel her in manipulating the feudal system, and their influence in the empire outstrips her own.

In earlier nights, Julia Antasia was a mentor to Lucien, the Roman Gangrel who sired Bernhard Billung and has advised the Concord since its inception. Lucien spoke reverently of the Ventrue elder, mentioning to his progeny many times that in the dark nights after the fall of Rome, she was all that stood between he and the worst depredations of his own Beast. Bernhard met the ancient but once in their travels, and was over-awed by her serenity and poise. As part of her own mission to disseminate her medical advances,Sister Maude has also benefitted from the patronage and advice of the prince of Frankfurt. During a visit to the city on the Main in AD 1201, she became familiar with some of Julia’s story.

Julia Antasia was born to a wealthy family in the Eternal City. Her life hardly could have been better- she lived in a villa with a magnificent view on one of the seven hills, surrounded by the opulence and wealth of the emerging power of the Roman Republic. But she lived in a time of unrest. The plebes , the poor masses, rose against the patricians to take by force what they had been promised. Julia might not have become an important woman had she married another patrician to grow old at his hearth and finally to die from old age. Instead, she loved a plebeian, a common farmer who was deeply indebted to her father.

In spite of their mutual love, such a liaison was unthinkable, for the patricians forbade their own kind to marry plebeians. Julia did not intend to resign herself to this fate. She studied the Greek polis and fled the villa one night to meet with some plebeians who wanted to formulate their demands. They knew what the patricians had promised but not given them, but they lacked the rhetorical talent to express it. This was something the young patrician woman could make up for, as she had time and opportunity to study Greek philosophers. Still she could not avoid her fate: Her father arranged a marriage with another patrician house.

Perhaps it was her penchant for politics or her rhetorical skills, her common sense or her ability to convince those who listened to her. Maybe it was the fact that the marriage against her will did not break her and that she fulfilled her duties as expected, but still tried to better the plebeians lot. The truth of her sire’s decision to Embrace her was never given, but it was none other than the potent Etruscan methuselah Tinia who brought the young woman into Clan Ventrue.

Tinia had watched over the peoples of Etruria, the Po valley and what would become known as Campania for centuries, masquerading as the sky god of the Etruscans. The interest of the ancient had shifted to Rome as the city began to eclipse the greatness of the Etruscan dodecapolis, and Tinia had sent her most ambitious childe, Collat, to ensure that their power was assured.

Collat was known to focus his efforts solely on the patrician class, so it is possible that Tinia wanted Julia to round out the older Cainite’s power base. Whatever the case, while Julia was one of the first to be Embraced in Rome, she would soon have plenty of company. It is said that by rise of the Augustus, as many as 1000 Cainites made their havens in the Eternal City.

Julia would become an influential member of the Eternal Senate of the Ventrue, an institution that could only reach its full potential within a republic. Every Ventrue had the right to speak, regardless of his age, and the vote of an ancilla was just as important as that of an elder. The clan’s traditions were not mere phrases, but iron laws. For centuries, Julia Antasia was active in this senate, and she helped delineate its course. In the immortal society of Rome, sex meant nothing, and she could finally be what had been denied her in life: a politician who worked for the good of all.

The wars against Carthage, though, already sealed the slow, but inevitable decline of the Ventrue senate and deeply divided the clan itself. Fuelled by the early Caesar’s genius and the mortal legions’ successes, the influence of the Cainite lords of the Eternal City grew faster than they could understand at first. Flooded by wealth and power, keeping control became the first and foremost priority.

Soon, the Ventrue senate meetings became a playground and battlefield for the elders’ overwhelming presence and their harsh words. Julia regularly had to contend with the inscrutable intrigues of ancient vampires such as Tiamat and Mithras, as well as fellow elders such as Antonius the Gaul, Cretheus and her cousin-in-blood Titus Venturus Camillus (who would eventually take the blood, and throne, of his sire Collat). It was standard procedure to force the young ones to be loyal via favours or the blood oath, and Julia recognised that the ideal she had upheld in her early centuries had become a feeble dream. A generation after Constantine the Great moved the capital to Byzantium, Julia quietly retired from Rome, journeyed into the north, and disappeared from history.

It is thought that Julia, weary with the weight of her millennium of existence and the failures of the Eternal Senate, spent much of the next five centuries in torpor. In his discussions with Bernhard Billung, Lucien has mentioned that he took guidance from the ancient after the fall of Rome, and that Julia’s mentorship was all that kept the Beast from taking him in those dark years. However, despite his tales there is no record of Julia Antasia being active during the 5th to the 9th centuries. Perhaps she drifted in and out of torpor, and had lost interest in bringing her considerable talents to bear on the world when war and famine dictated the political landscape. Or perhaps the ancient Gangrel was merely lying…

Whatever the case, in the early years of the 9th century, when the empire of Charlemagne was divided between his sons, Julia reappeared in the territory that she had known as Germania Superior. For the better part of one hundred and fifty years, she toured the courts of the fractured Frankish empire, ostensibly to familiarise herself with the new Cainites lords of the Long Night, before moving into an old Roman castle north of the city of Frankfurt. Inviting a number of like-minded elders and ancillae, she created a Cainite Senate in AD 950. As their first act, the new senate elected her their prince. She reigns, with their continued support, to this night more than 250 years later.

Under the guidance of the liberal ideals of Julia Antasia and her Cainite senate, Frankfurt has grown into a bustling centre of trade and commerce. They seek to expand their cosmopolitan open-mindedness to other cities in the empire, and a faction has arisen to champion their humanitarian ideals. The Antasians can now be found throughout many of the courts of Franconia, Lorraine, Champagne, the Île-de-France, and parts of the growing Hanse.

Julia’s grandchilde, Giselher, is prince of Cologne and a number of her other descendents have prominent roles in the courts of Metz, Würzburg, and Mainz. Unlike her rivals Hardestadt and Dominius, who organise their ranks in strict feudal hierarchies, Julia does not seek to control her supporters among the Antasians in any way other than through her own example with Frankfurt. Her city is quite secure, considering the vintage of her allies in the senate, but it should be noted that few of them have her vitality and a number of them currently rest in torpor. Most of her agents, such as the formidable Sabina von Langenhain, are actually ancillae.

Julia does have a great deal of influence in the Holy Roman Empire, and formerly enjoyed considerably more through her friendship with the late emperor Frederick Barbarossa. She actually accompanied the emperor on the Third Crusade, though she was apparently unable to stop the great man from drowning while crossing a river in the east. In recent years, she has stepped back from imperial politics for her own reasons, but it is thought that many of her pawns still sit in place should she require them. She also has considerable influence with the Academy, a movement of scholars who debate the philosophies of the via humanitatis.

Embrace: Reputedly early in the 5th century BC. 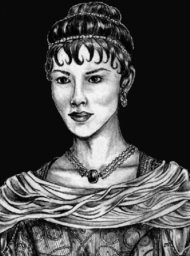