The right-hand Cainite of the Voivode of Voivodes, Lady Kara Lupescu is a skilled warrior. Unfortunately, she is often pressed into the role of diplomat, a vocation for which she has rather less patience.

A cool, breathtakingly striking noblewoman of Magyar stock, wearing a slightly out-dated but elegant dress in the Hungarian court fashions. Shockingly, she also openly wears a matched, richly decorated arming sword and dagger at her belt. Her features are in perfect symmetry, from her high cheekbones to her perfectly straight nose and her full, expressive lips. While she is not of a robust build, she is tall for a Magyar, and moves with a grace that evidences her skills as a warrior. 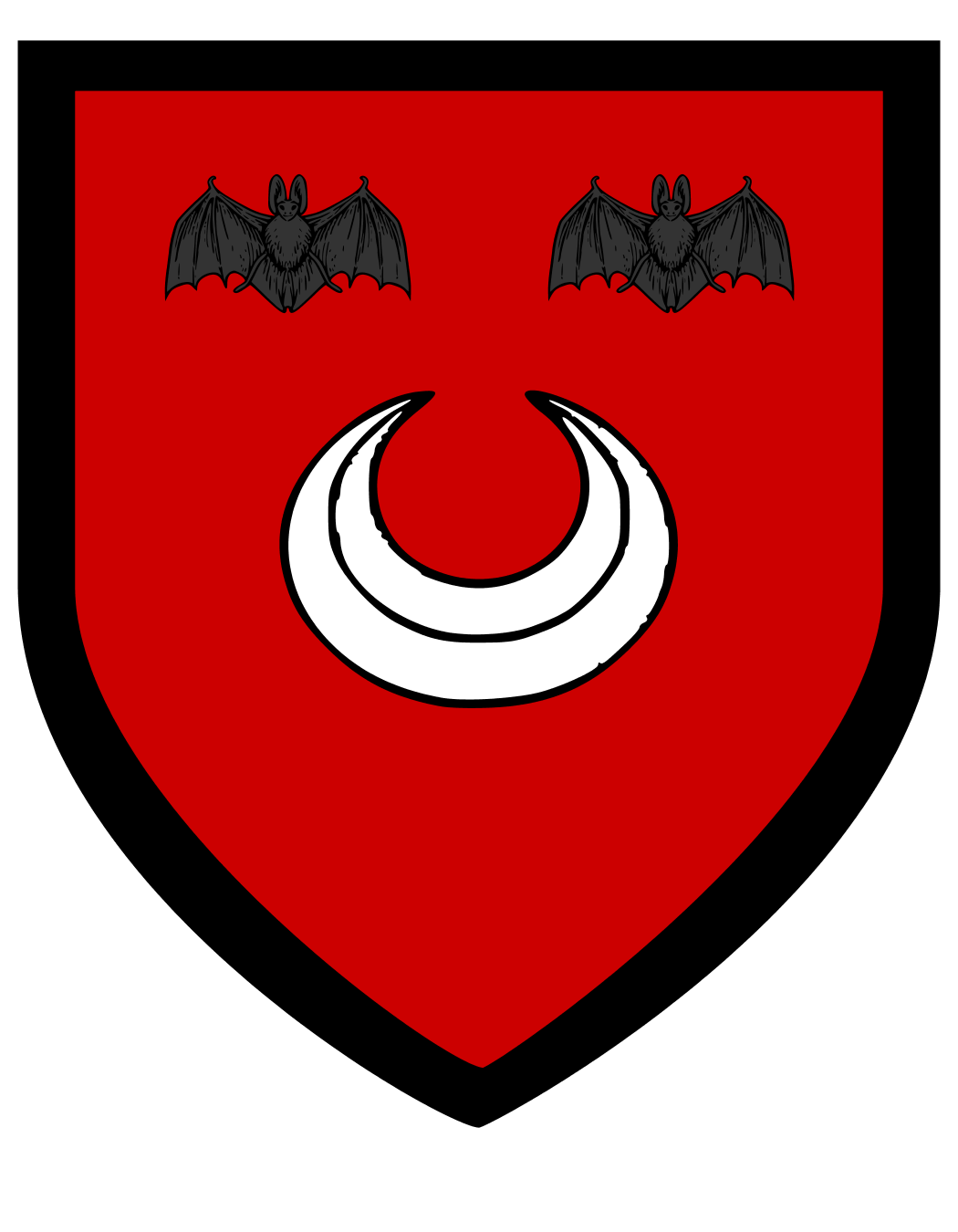 The coat-of-arms of Lady Kara Vlaszy Lupescu, Knez of Zolonta and Pădureni, chief envoy and aide-de-camp to Vladimir Rustovich, Voivode among Voivodes.

(This wiki is a revision of the background provided in Under a Black Cross , pp. 94-95)

Lady Kara Lupescu is the primary agent of her sire, Voivode of Voivodes Vladimir Rustovich, in the mortal courts of Hungary. Unlike her chief rival, Baron Heinrich of the Eastern Lord Ventrue, she has no great knack for hiding among mortals but she more than makes up for it with her audacity, great beauty and extraordinary talent for the Discipline of Presence. Both Cainites play a dangerous game over the fate of the Árpád Dynasty of the Kingdom of Hungary, having each earned the ear of King András II himself. In addition to her role as Chief Envoy of Rustovitch, Lady Kara is a knez in her own right. Her estates, which include a strong, stone fortification at the village of Pădureni, lie some twenty-five miles north of the city of Arad. While she is seldom there, her progeny and her devoted mortal kin keep her lands safe from the Árpáds and her fellow Shapers.

The only daughter of Elspeth, a noted Magyar seductress, and the Vlach warlord Nikolai Lupescu, Kara was born to greatness. By virtue of her feminine wiles, her mother had great influence over the clans that would go on to form the nation of Hungary, while her father was noted for his resistance to their raids into the foothills of the Apuseni Mountains. While their deeds have slipped into vague legend in the ensuing years since the 10th century, Hungarian historians and those versed in folklore still remember their names. Many of their descendants, both of the Vlaszy line and the Lupescu line, maintain considerable power throughout the nation as knights, royal servants, boyars, and even ispáns.

Early on, Kara swore the Blood Oath to Vladimir Rustovich, then a young and ambitious voivode only just beginning to claim the legacy of his own destroyed sire, Kosczecsyku. Even then, Rustovitch displayed a canny ability to maintain a presence as both a mortal lord and an immortal one. In the former sphere, Kara became his primary agent. She spent decades as his servant, learning the arts of war and the graces of court with equal fervour. Like her mother before her, she faced off against agents of the Árpád Ventrue, luring some into accords that cost them their domains, and facing others on the field of battle. By the time the nights of the 10th century wound down, she had already become a force to be reckoned with. In AD 975, her successes earned her the Embrace, and a station at her increasingly illustrious sire’s right hand.

For most of the 12th century and into the years of the 13th, Lady Kara has dutifully served as her sire’s main diplomatic envoy outside the Voivodate. Of Magyar stock and well-versed in the ways of the emerging Christian tenets of chivalry, Kara can move through the courts of Western Cainites with little trouble. Her legions of loyal mortal kin aid her in keeping an eye on the noble courts of Hungary, and her diffuse influence is equal to any that the Árpád Ventrue (at least in their current, diminished, state) can exercise over their mortal vassals. While the king himself is still at least nominally their pawn, András II adores the fey and strong-willed Lady Kara, and will hear no ill words against her. Scurrilous rumours at court even hold that she has long been his mistress…

However, despite her continued success, Kara’s patience with diplomatic games has long since grown thin, and it is her fervent hope that Lord Rustovitch will find someone more able, and more suited to the task. Perhaps the source of her frustration is the fact that her sire already has. For more than thirty years (AD 1106-1138), the mortal ghoul Veceslav Basarab served as Lady Kara’s second in the courts of Esztergom, Buda-Pest, Székesfehérvár and even farther afield. Rustovitch was grooming the smooth and erudite young Basarab for the Embrace for much of that time, while simultaneously seeking to free the mortal from pre-extant feudal bonds to another powerful voivode in order to do so with honour. Unfortunately, Veceslav was called away before his release could be secured, and the talented diplomat was instead given over to the failed voivode of Serdica, Gabor, for an ignominious Becoming unworthy of his pedigree. Lady Kara railed at the decision, and perhaps unjustly blames the younger Tzimisce for dooming her to a continued life of diplomatic drudgery when she would rather be in the field, leading Trials by War. Her apparent disdain for Veceslav continues, almost a century later.

Despite her continued distaste for her duties, Lady Kara continues to succeed at them admirably. In the 1180s and 1190s, with the collapse of King Bulscu’s influence over the mortal Árpáds, and the eruption of political infighting between the factions of Vencel Rikard of Buda-Pest and Géza Árpád of Esztergom, Kara’s mortal agents have thoroughly wormed their way into the highest courts of the kingdom. She has successfully maneuvered the mortal catspaws of the Árpád Ventrue into internecine strife, and broken down decades of progress for the kingdom in the process. Some blame her for the feuding between (then Prince) András and his elder brother, the late King Imre, which utterly destabilised the kingdom in the closing years of the 12th century. Other say that she was the mastermind behind the kidnap of the powerful Lord Nova Arpad in the 1190s, which sounded the death knell for the ailing Council of Ashes. Whatever the truth, Lady Kara is largely credited with buying the Tzimisce Voivodate considerable breathing space to regain the initiative against both the Ventrue and the Tremere.

Unfortunately, her success came with unforeseen consequences. With the Árpád Ventrue too weak to continue prosecuting their hostilities with the Tzimsce, others have stepped into the void. Jürgen von Verden, preeminent among the Eastern Lord Ventrue and Overlord of Saxony, Thuringia and Brandenburg, has come to the “rescue” of his beleaguered kin. Using his driven and talented childe, Heinrich von Achern, he managed to insinuate the Teutonic Order into the good graces of King András and scored a tremendous coup against the Tzimisce with the creation of the Burzenland— a new, royally declared Ventrue dominion right in the heartland of the Clan of the Dragon.

Lady Kara was present in Magdeburg for the announcement, and she was far from pleased. Indeed, her temper exploded at the news of the impertinent Saxon lord, and she assaulted one of the Teutonic brothers who dared to raise his weapon tp her. It was clear to all that war had been declared by the Ventrue. And at the close of the festivities, they would have their answer. Lady Kara secretly stalked, skinned, and left the corpse of that same brother, Kurt, at the edge of the city’s domain. Written in his own blood on the skin of the dead knight was the following message:

Let it be known that we are at war. Bring your forces if you wish. Victory will be ours.

Years later, Lady Kara would bring many hundreds of men to the banner of King András II for his crusade to the Holy Land. In council with the other pilgrims of the Cainite Crusade she boasted that no fewer than 500 knights several times that number of footmen and sergeants were there at her command. The contribution of the Tzimisce outstripped the size (if not necessarily the quality) of even the Order of the Black Cross and their Siebenburger allies, giving Lady Kara and her followers disproportionate power in a Cainite Crusade largely peopled by her enemies among the Ventrue.

She and her coterie did their part to see the campaign succeed, often pointedly ignoring the sneers and scowls of their enemies and rivals. Of course, their dislike was also warranted at times, most especially when Lady Kara made a point of executing a Muslim infidel with a javelin toss at the games celebrated by Prince Etienne at Acre. On that occasios, she snidely derided other members of the Cainite Crusade for playing at war rather than conducting it.

Curiously, although their mutual hatred was undiminished, Lady Kara and Baron Heinrich were united in their apparent hope that King András II would prove worthy of his boast of being a “Crusader King.” On several occasions throughout the course of the campaign, they were observed to be working reluctantly in league to see him rise to their hopes, only to have that aspiration bitterly dashed as he chased relics rather than glory on the battlefield.

Embrace: AD 975, although it is thought she served Rustovitch as his ghoul for several decades prior to her Becoming.

Lineage: Childe of Vladimir Rustovitch, Childe of Kosczecsyku (d). Further lineage between Kosczecsyku and the Eldest is unknown for certain, with some claiming Shaagra as his sire and others Yorak or Triglav. Kosczecsyku was not in the habit of reciting his lineage, and if he was indeed the progeny of Shaagra, it is likely that diablerie lies somewhere within the boughs of the family tree. Lady Kara is known to be of the 7th generation. 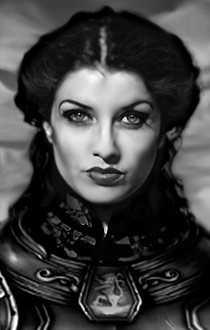