The charming, inquisitive Szekler is the son and former ghoul of Bodor Toth, the secret Boyar of the Bostral Pass. Kilián fled his family and their lands during Koban's assault.

A young Szekler man with a pleasing, if not quite exactly handsome, face. He has long, light brown hair, a wispy moustache and goatee and a thin, rakish build quite unlike that of his older brother. His light brown eyes are friendly enough, but have a calculating quality to them. He dresses in Byzantine fashion.

Of all the noble family of Toth, Kilián was pleased to see the Concord enter his existence. During the initial dinner in honour of their arrival at the castle, he pelted them with questions of the far-flung lands and cities that they had seen in their travels, the customs and languages of the people who inhabited them, and where they might go next. Indeed, his incessant inquiries dominated much of the table conversation until the true business of their arrival was finally broached. Ever curious to network, Bernhard sought him out later to hear his story, and sound out his loyalties. He worked further on Kilián over the coming weeks, and discovered much of his tale, and his secret resentments.

If he had been allowed to choose, Kilián never would have asked to be trapped in a tiny Carpathian holding, the second son of a vampyr, doomed to live the rest of his life serving his father’s eccentric whims. Even if he dared risking his father’s retribution by conspiring to depose his elder brother (of whom he was really rather fond anyway), he had no desire to be called boyar by 700 backward peasants on the fringes of Transylvania. His fantasies involved him travelling the great southern cities of which he had read and partaking of their many splendours. After all, was it not better to be a man among wealth and culture than a lord among filth and ignorance?

When Bodor asked him to help discover a cure for his curse, Kilián leapt at the chance to travel. He rode from Toth on his faithful steed, never intending to return. Venice, Rome, Constantinople, Alexandria, Thessalonica, Athens- the world was his to seek. Unfortunately, his attempts to to impress by claiming himself to be of eastern nobility drew the wrong kind of attention in the form of Lempi Mannisenmaki. Using her wiles and her Disciplines, the Usurper soon learned of the “Toth Curse” from Kilián, and made him her ghoul. Lempi, a rank neonate of Clan Tremere, was eager to prove herself to her overseers and hit upon a plan to propel herself into mortal power and influence. She compelled Kilián to return to Toth with her, where she introduced herself to Bodor as a mystic who could help him control his curse.

Finding that he had faked his death and placed his son Dévald in charge instead, she could not believe her good fortune. This would be easy. Within a week she tried to murder the trusting and ignorant Tzimisce, using Kilián as her catspaw. Unfortunately, she had miscalculated. Bodor proved stronger in the Blood, and intuitively gifted in its use. He managed to overpower Lempi and Kilián, then imprisoned them both.

Through torture and starvation he divined from her the first stumbling steps along the road to understanding the powers of the Blood, although it would be some years before he wrangled the nature of the Blood Bond from her. He began feeding Kilián his own blood to sustain him, and eventually his affections transferred back to his father. As the years progressed, Lempi became a canvas for Bodor to practice his ever-expanding knowledge of flesh-crafting. The last two decades of her existence was spent as various iterations of Bodor’s writing desk.

For his part, Kilián bore Lempi no ill will, even after his Blood Oath to her atrophied in favour of the one to his father. Lempi remained an invaluable teacher of the outside world, and the powers and society of the Children of Caine. He stole into his father’s study often to speak with the Tremere, to feed her extra blood, and to keep her sane.

Kilián attempted to flee Toth on several occasions. He rode his horse as far from the village as he could before the blood hunger set in and drove him back home. Unsurprisingly , he grew disheartened as the distance became less and less with the passing years, and even more so when his father forbade him from even visiting the village. His face and age would be recognised, Bodor said, and unless he wanted them changed it had become too dangerous. Repulsed by the very notion, Kilián agreed to confine himself to the castle, but his impatience and resentment burned.

The arrival of the Concord changed everything. For the first time, Bodor was not the power in the village, and Kilián swiftly sought to seek favours with the newcomers. His knowledge of the pass and the trails proved invaluable for setting traps for the army of Voivode Koban, and he served as an intermediary between the coterie and his family.

When the Trial by War began in earnest, Kilián fought bravely and with distinction in the repulsion of the first two assaults on the castle. However, during the third assault, Kilián mysteriously disappeared. He was not amongst the slain, nor among the prisoners that Koban impaled outside the castle. Furthermore, Bodor soon discovered that Lempi had been destroyed, as her ashes littered the floor of his study. It was soon surmised that Kilián had done the deed, abandoned his kin, and fled into the teeth of the deadly blizzard. 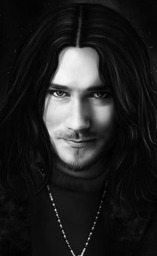