A weaver and embroiderer of extraordinary skill, this Greek Toreador was a member of the Reformed Michaelites of Constantinople. He was unashamedly Petronius' creature, and since the Great Sack he has floundered in the absence of his mentor.

An extremely handsome artisan in his prime, pale and delicate of feature, quite tall and exuding presence and confidence. His light brown eyes have a soulful, intense quality and his wavy, dark brown hair is worn shoulder length. He wears exceptionally fine robes of damask, in the latest fashions of the Romaioi. There appear to be no weapons about his person.

Before the Great Sack, the Final Death of Michael, and the resulting dissolution of the power of the Family system, when a new Toreador or a well-known artisan of another clan made their presence known in the Queen of Cities, it was only a matter of time before they were sought out by Komanos of Stomion. Handsome in a way that causes strangers to stare and blush, and friendly enough to make introductions and forge associations with ease, Komanos proudly offered visitors the opportunity to meet his patron, Petronius, Arbiter and Quaesitor of the Michaelite family.

Komanos hails from a small port on the Thermaic Gulf, not far from Thessalonica. He is a truly gifted weaver and embroiderer, whose works were in demand in the capital long before he earned the Embrace of the beautiful Toreador Euphrosyne, a prominent elder of the city of Larissa. Komanos served his sire for many years, first as a seneschal and then as a an agent in her intrigues throughout the theme, but he was always too ambitious to remain in the provinces. He long sought the favour of his great-sire Petronius, and wasted no time in striking up a correspondence with the venerable elder once it was clear that the Michaelites had fallen on hard times. When Euphrosyne finally released him in AD 1194, he travelled straight to Constantinople and sought out Petronius’ patronage. The quaesitor told the neonate that he needed to earn his favour however, and left him to find his own way in the Queen of Cities.

The neonate took the advice to heart, and set out to prove himself. It took little time for Komanos to make a splash with the quality of his craft, for the imperial court itself took notice of his wares. Indeed, Komanos’ art was sufficient to spark something of a renaissance in the styles of damask, which had not been in fashion for more than a century. Alas, the Children of Judas were skilled at their games and he also swiftly fell into the social circles of his fallen kin, enjoying the illicit fruits to be sampled at the Silk Road, the Eye, and other houses of ill repute throughout the harbours, the Mese, and the Latin Quarter. Owing to his friendly disposition and handsome face, he was a popular addition to the wastrel ranks of the younger Michaelites, and he proved a reluctant, if talented, sybarite. By 1197 he was beginning to lose his way, but struggled to keep his hopes and dreams alive. It was at this point that Petronius had Athanasios acted to pull Komanos out of his spiral before it was too late, and he was gracefully brought into the house of the old wit.

Petronius then explained that from the first he had been impressed with Komanos’ skill and ambition, both of which were quite adequate to be of service to his new faction of Reformed Michaelites. However, he initially denied Komanos because he felt that it was also necessary for the young Toreador to experience and understand the wiles of the Children, and to in turn show a desire to withstand them. The Reformed Michaelites, Petronius continued, could only accept the strong — those with the passion to see their work though. Moreover, it was also necessary for the Toreador to work actively in cooperation against the Children, not merely to resist them. Komanos took the quaesitor’s lessons to heart, and like Athanasios he worked (with admittedly mixed success) to be a foil to the Settites.

In doing so he became a member of a coterie with several other promising young Cainites including Conrad of the Lexor family, Loukia of the Baron’s Gangrel, and (secretly) Fra’ Osmund of the Knights of St. Ladre. Komanos had more polish to him than the rest of his coterie-mates put together, and he was their public voice as well as their chief agent in the Elysiums of the Trinity Families.

He was also the most active of the Michaelites (other than Petronius, of course) in both the Great and Blachernae Palaces, as the Ventrue and their mortal pawns among the nobility clamoured for his craftsmanship. It was in this capacity that Komanos met the ancient Cappadocian Lady Alexia Theusa, chief advisor to the Antonian Basileus Caius. The two of them appeared to strike up an unlikely friendship, and they were oft spotted talking quietly and companionably while wandering the gardens of the Great Palace or the ruins of the acropolis. Some speculated that the two had become lovers, for at times the ancient Cappadocian was seen gazing at him wistfully, and she seemed to hang on his every word. Indeed, Komanos brokered the meeting between Sister Maude Khlesl and Alexia Theusa that resulted in a mutually beneficial sharing of medical and thanatological knowledge.

In December of 1203, Komanos disappeared suddenly. As he was such a prominent member of the Reformed Michaelites and a valuable participant in the affairs of Elysium, his absence was noted along with the worry of Petronius, Athanasius, and Alexia. All of them made energetic enquiries and offered silver, gold, and favours for his safe return or knowledge of his whereabouts, but no sign of him was found. Members of the Concord privately wondered if he had become a victim of the resurgent apocalyptic sect known as the Chosen of Calomena. Shortly thereafter, the city became embroiled in new hostilities with the Fourth Crusade and but for his fellows he was forgotten in the turmoil of the second siege and the Great Sack.

Months later, drawn by certain disruptions in the Underworld that had stirred up the Giovanni Cappadocians, a mortal cult of death-obsessed mages, and a number of wraiths, the Concord uncovered the secret haven of Lady Alexia below the ruins of the ancient acropolis of Byzantium. Within was the methuselah Byzar and no fewer than forty-four other vampires, all trapped in some powerful necromantic ritual that appeared to slowly drain them of their energies in order to power some great work of the missing Alexia. Struggling to consciousness despite his mystic shackles, Byzar begged them for their assistance, and after bargaining to ensure his gratitude, the Concord gave it. They released the Ancient from his prison, which in turn seemed to start a chain reaction that began to slowly unravel the enchantment that Lady Alexia had placed upon each of her torpid thralls.

As the last to be ensnared, Komanos began to stir almost immediately. For his own reasons, Byzar seemed disinclined to destroy any of Alexia’s “imperial progeny,” but he had no qualms about slaying the others, all of whom seemed to be lovers who reminded her of some vanished true love that she longed for. However, Iulia and Maude convinced him that as they were all linked together by her ritual, albeit briefly in Komanos’ case, it would be unwise to give the Final Death to any of them at all as the consequences of her strange magics could not be easily divined. Byzar saw that there was some sense to their theory, and he followed their advice. Instead, he used his masterful proficiency with the Dominate discipline to erase the young Michaelite’s memories of his abduction and his awakening. Instead, he would believe that Petronius had sent him on a fruitless mission abroad.

Komanos remains in the Queen of Cities to this night, although he weeps for the loss of its magnificence and the emptiness of existence without the Dream. In the absence of Petronius, who has not been seen since the Great Sack, he finds himself at loose ends and without inspiration, but for some reason he can not bring himself to abandon Constantinople. Unlike Athanasius, who seems to have thrown in his lot with the growing Nephilim cult of Pakourianis and Bathalos, he stays aloof of his former fellows and he instead keeps to himself and his craft. Komanos does accept commissions from the powers that be within the city, but he no longer makes a point of attending Elysium, nor does he accept invitations to do so by any but the most potent and easily offended of hosts.

Lineage: Komanos of Stomion is of the 8th generation. He is the childe of Euphrosyne, an elder of Larissa noted for her great skill in the art of ceramics. She is the childe of Isaac Basilacius the poet and vintner, who has dwelt in Maroneia since he took his his leave from Constantinople early in the 7th century. Basilacius is the childe of Petronius, once Arbiter and Quaesitor of the Michaelites, who has not been seen since the Great Sack. He in turn was the childe of Michael, called the Patriach and the Archangel, who was destroyed with the fall of his city in 1204. Michael was the childe of Arikel. 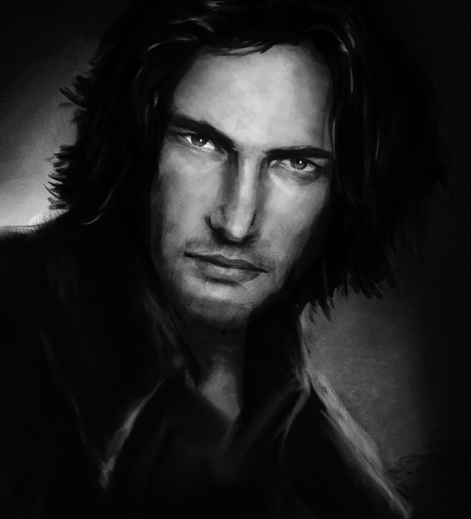