A rather rabid ghoul in service to the vicious Tzimisce elder Gabor, this Bulgarian was a skilled and loyal servant despite his flaws. He was slain in battle fighting for Sophia in December of 1204.

A very serious Bulgarian warrior in his late thirties, wearing leathers, a chain shirt, a slightly ridiculous antique helmet with a plume, and a bear skin cloak. He is armed with a sabre and a dagger, and carries a small shield painted black.

At the time of his death, Krasimir was the longest serving of Gabor’s ghoul warriors, and had been a raider, mercenary and blackguard since he was old enough to ride. He had been a loyal servant of Gabor the Bulgar for nearly 100 years, and has spent much of that “enhanced” in certain ways for making war on the enemies of the Obertus Order. In fact, his antique helmet is a trophy of his triumph over an ancient ghoul in the service of the dreaded Noriz, the Corrupter of Legions.Towards the end of the 12th century, he was returned to a semblance of his original appearance, the better to accommodate Gabor’s more social intrigues among the Cainites of Constantinople and for passing among the mortals during Gabor and Veceslav’s endless travels.

He was surly, taciturn, and boorish when motivated to speak. Indeed, in his customary manner Gabor ruthlessly conditioned him to speak only when spoken to by himself or another Cainite. Even so, during the initial phase of the journey to Tihuta Pass, Krasimir attempted to establish dominance over the other senior ghouls in the expedition. Agmundir the Cunning quickly disabused him of the notion with a beating, and the Bulgarian morosely settled into the position of able second to the stronger warrior. Easily the finest horseman in the caravan, he often served as an outrider during the journey and proved to rival Iulia as a horse archer when given a captured bow.

However, in spite of his flaws and limitations he was completely loyal to Gabor and also to Veceslav so long as it pleased his domitor. He had a fondness for riding, strong drink, prostitutes, and fist-fighting, preferably all together, and the Concord and their servants discovered that he was relatively easy to motivate, so long as blood was involved. Indeed, Krasimir never seemed quite so at ease nor so confident as when he is in battle, proving to be an odd counterpart to the furious fighting style of Agmundir. Krasimir served well during the Tihuta construction project, both as a scout in the early months and later as a warrior against the enemy coterie known as the Northern Blood. Thus, he was bitterly disappointed to find that Veceslav had recommended that his younger ghoul-brother, Grozdan, should be chosen over him for the Embrace.

During the Trial by War conducted on the village and castle of Toth by Voivode Koban, Grozdan once more served the coterie ably both as a scout and a soldier. Unfortunately, he fell in battle against one of Koban’s vozhd in the final battle for the castle. He struck a telling blow to the beast, which then tore his arm off and hurled him through a door. After the Concord was victorious, Krasimir was discovered alive; his ghoulish vitality had saved him, and Veceslav and Maude were even able to use their combined powers to reattach and restore his arm. He would personally bury his friend, Veceslav’s other remaining ghoul, Laszlo, and he stood vigil for his fallen sword-brother for 3 days and 3 nights.

Krasimir continued to serve Gabor and Veceslav through the coming conflict of the 4th Crusade and the war for the Queen of Cities and the Dream. He would also accompany his masters to press Gabor’s long delayed suit for the city of Sophia in December of 1204. There he would finally breathe his last, defending their backs against the Athanatos servants of Bela Rusenko. He had already expired by the time that Gabor’s courage had failed, and Veceslav was forced to beat a hasty retreat after the cowardly flight of his sire, so he was not aware that his life’s blood was spent uselessly.

Ironically, Grozdan was the only remaining member of Krasimir’s “family” who did not escape. Bound into lengthy service to now-prince Bela, he was able to take possession of the fallen friend who had so bitterly cursed his own good fortune. Grozdan buried Krasimir on the mountainside not far from the city. He did so in a private ceremony, ensuring that the dead Bulgarian was interred with his sword and his shield, but he kept the antique helmet of his brother as a keepsake. To this night it sits on the mantle in Grozdan’s quarters. 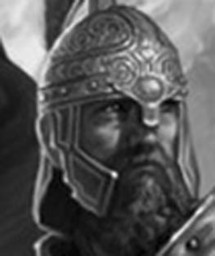