Once a diplomat of the Licinian Lasombra of Adrianople, this brilliant schemer and mistress of politics now exists in disgrace for failing to prevent the destruction of the Byzantine Empire. She resides in the court of her progeny, Iulia of Weißenburg.

This lady is tall, regal and refined, with an imperious gleam in her eye. Her long, shining black hair hangs loose and seems to writhe of its own accord at times. She dresses all in black velvet, and drips with emeralds and rubies. A slender, bejewelled dagger sits on her belt.

Little is known of Lady Katerina’s origins, although some have noted that her accent, while faint, appears to hail from the people of the Kievan Rus’. It is known that she is an ancilla, and that she has spent the vast majority of her years in the city of Constantinople, representing Prince Marcus Licinius to the Trinity Familes and also the Narsene Lasombra. The rest of her time was spent moving amongst the Bulgarian knezi and voivodes of Clan Tzimisce in an attempt to keep cordial relations with the barbarian northerners open and also, many have presumed, to hedge her prince’s bets should the Byzantine Empire continue to deteriorate.

Among the Concord, it is known for certain that she was brought across before the end of the 10th century by an ambitious Lasombra of the Licinian Scion family of Adrianople. Adrastos Zonitizes also served as an envoy for his ancient prince, and had hoped to use the Christianising Rus’ as a tool in his intrigues to expand the borders of the weak Byzantine state still farther to the north. Under his tutelage, she came to love the grandeur of the Dream when they visited the Queen of Cities. Katerina was his catspaw for several decades before Adrastos fatally miscalculated and was destroyed by a Ventrue bloodline that had long secretly guided the fortunes of Golden Kiev against the Tzimisce. This also resulted in an invasion of Byzantine territory by Syvatoslav the Great, and near ruination for the empire. Luckily, Lady Katerina managed to foil her pursuers and travel west rather than south. In the wake of the war, she then threw herself upon her grandsire’s mercy and eventually earned his endorsement for the late Adrastos’ position.

For centuries Lady Katerina dealt capably both with the Trinity Families and the nascent Latin powers in Constantinople. She was happy embroiling herself in the intrigue of the Queen of Cities, but never forgot how she was humbled and cast out from her own people by the Ventrue. The Lasombra matron’s interest in the Siebenburgen and Transylvania was never stated other than to see her childe and prodigy, Iulia, establish a domain and grow in power. Procet was at one point heard to wryly note, though, that she seemed to be making many friends among the Tzimisce and Kiev is not so very far away from the Carpathians.

Of all the sires of the the vampires who would become the Concord, she seemed to prefer the company of Gabor the Bulgar and Dietrich von Steyer, both of whom echoed her interest in politics and intrigue. She was guarded and more than a little in awe of Lucien and the weight of his years, and while she appreciated Procet’s incisive mind and his subtlety, she found his moralising to be tedious. It is curious then, that it was the last Cainite with whom circumstance often saw her work in closest proximity, and in truth she and Procet made a good team over the final years of the Dream.

Sadly, as history has shown the work of the Concord and their sires failed to avert disaster for the Queen of Cities. Like nearly all of the residents of Constantinople, Lady Katerina simply didn’t believe that the 4th Crusade would ultimately prevail, and the alliances she made and the deals she brokered during the time of crisis before the city fell were ill-starred. Ultimately, her intrigues did not serve the Licinian Lasombra, for after the the Great Sack, most of her work fell apart with the Final Deaths, disappearances, or exiles of suddenly disempowered Cainites of the Trinity Families and their Scions.

Marcus Licinius and his followers were left wrong-footed by her failure, as the only favourable alliances he was left with were among the fractious Tzimisce and Brujah of the resurgent Empire of Bulgaria. It was not long before the remaining armies of the 4th Crusade, now marching under the banner of the new Latin Empire of Byzantium, were marching on his city. The Cainites who travelled in their wake had their own designs on his city, and Prince Marcus was forced to cut some quick and unfavourable deals of his own to preserve his power. The Battle of Adrianople in April of 1205 would see the capture of Emperor Baldwin, the death of Louis of Blois and countless others, and the freedom of Licinius’ city in unstable alliance with the Bulgarians. It would take years for the Licinian family to regain their initiative and pay back the prestation owed to their Tzimisce neighbours.

Needless to say, he was unhappy with his diplomat and he made his displeasure known. Rather than returning to face almost certain destruction, Lady Katerina chose to remain amid the chaos of the gradually coalescing new order in Constantinople, and she forced Iulia, some of her potent new allies, and her new assets among the fractured Scholai Guard to remain at her side. Indeed, her fear of assassination was such that Lady Katerina was quick to place herself and her progeny at the disposal of Alfonzo of Venice, helping that Lasombra eventually take the throne of Byzantium in 1206. The cost of all this was the domain of Weißenburg, which was stolen from her childe by her own treacherous seneschal due to her extended absence.

It would not be until 1209 that Lady Katerina was persuaded to leave Constantinople so that Iulia could reclaim her domain from Octavus Silberschmied. Travelling quietly and using the ghostly allies of Iulia and Sister Maude Khlesl, the Concord were able to ferret out the havens and servants of the usurping Nosferatu in advance of their attack. Their revenge was merciless, and Silberschmeid barely escaped their trap. Most of his allies did not. Weißenburg was recovered, as was the reputation of Iulia and the Concord.

Over the years since, Lady Katerina has existed quietly, even nervously, under the protection of her own progeny. She knows that her grandsire is busy with the unstable political and military borders of the Bulgarian and Latin empires, but in her paranoia she expects assassins to come for her on any given night. She keeps Agmundir and Haldir close, and otherwise relies on the servants of her progeny and a cadre of vicious criminals that she has Conditioned to be tireless in their vigils.

When Iulia declared her intention to briefly accompany the 5th Cainite Crusade, she trusted her sire and Sister Maude to guard her domain, knowing that between the political nous of the former, the death magics of the latter, and the raw potency of each, that all would be well. They dislike each other intensely, however, and the endless carping of Maude and sarcastic wit of Katerina almost certainly wore at each other in her absence.

Lineage: Lady Katerina is of the 8th generation and she hails from a noble bloodline. Unlike Iulia, however, she is disgraced, and she enjoys few benefits of her illustrious lineage. She is the childe of the late Adrastos Zonitzes (d), who once served his sire as a diplomat among the Kievan Rus’ and the Byzantine Empire. He in turn was the childe of Marcus Licinius, the venerable and ancient prince of Adrianople, who has ruled that city since the 4th century. Licinius is the childe of the great Zarathustra. Indeed it is fabled that he may be the Zaraθuštra, who founded the religion of Zoroastrianism. He holds great hatred for the Baali, and the Concord (and a very few others) know him to be the Lord of Shadows who secretly overlords the Cainites of the Principality of Antioch and the Country of Tripoli. He in turn is the childe of Boukephos, a truly ancient luminary of the clan who meddles with the Church and the Shadow Reconquista under the name Francisco Diego del Belmonte. Boukephos is the childe of Lasombra. 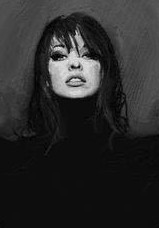