Poised, polite and personable, this lady is both cultured and well-traveled. She has split her time in recent years between Bistritz and the Holy Land.

This lady stands out even among her peers for her poise and grace. Her crystalline blue-grey eyes and pale, chiseled features give the impression of carved stone, an effect belied by her easy, warm smile. Her long dark hair is kept in a waist-length plait bound with a circlet of silk at the end and a colour matching the heavily embroidered highlights of her dress. Her long, brightly coloured dresses sweep along, giving the impression of a smoothly floating apparition.

Perlina’s faint accent is difficult to place, but her etiquette shows the refinement of high courts. While clearly a foreign immigrant to the region, her comfortable settlement in Bistritz seemed to agree with her. She has shown an interest in trade and establishing small domains throughout the Siebenbergen.

She is attended constantly by her ward, Urma von Wismar and was introduced to the coterie at Radu’s court along with Sergiu Lazar.

Perlina shared visions with Maude and Gunthar and offered some assistance in delving deeper into the the imagery. Later, she engaged in a discipline sharing and training group with Maude and Iulia further cementing an alliance with the coterie.

Her presence was requested at the Tihuta Pass construction site, leading to a reading of the residual energies surrounding three clay tablets found within a hidden underground room. Following a draining process in which the seeress described visions of the tablets’ author she was driven into torpor.

Gunthar von Wolfgang’s attempt at “assessing” her state by threatening to stake the lady was met with a furious assault from Urma.

In their mercy mission to raise Lady Perlina from torpor, coterie members met a number of other individuals of her group:

All of her gathered associates were very pleased to see Lady Perlina rise. As expected, Urma was barely able to contain her joy, but the remainder seemed equally happy to see her recovery.

Years after the Tihuta Project was successfully completed, Perlina wrote to several of the Concord announcing her intentions to travel to the Holy Land in order to consult with older seers of her clan and scholars of Cainite history. She mentioned in her letters that she felt like the attentions of something grand and malicious had been drawn her way (and theirs) by their receipt and translation of the Tihuta tablets. Most of her retainers travelled with her to the East, but she has kept up her interest in Bistritz and her business dealings with the Siebenburgen using trusted proxies.

In all the years since, Lady Perlina has returned to Bistritz but once, spending much of 1212 in her adopted home to ensure that her affairs were properly in order. She stopped briefly in Weißenburg to visit with Iulia and Maude, and they found her to be greatly changed from their previous association. Her aura of piety and peace had grown considerably from her time in Jerusalem, and she spoke of her association with certain ancient Malkavians and Cappadocians who had grown her understanding of their condition. In addition, while her researches of the mysterious Ashur who had written the ominous Tihuta tablets had so far proven more confusing than fruitful, she claimed to have learned much of use concerning the secret histories of the Children of Caine.

Lineage: Childe of Heinricus Aurelous. Further lineage is unknown, but Lady Perlina counts herself among the 7th generation. 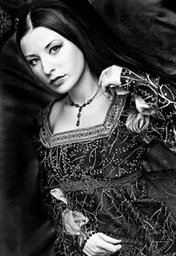