A streetwise merchant who patronised the Italian Grimaldi family; he specialised in trading lumber for Venetian glass and cloth. He took the Fourth Crusade in hopes of opening new trade channels, but he was destroyed during the Great Sack.

A wealthy, unassuming young Italian merchant with a pale, boyish face, mirthful brown eyes and dark brown, wavy hair. His clean-shaven face and youthful good looks conspired to give him a mischievous, welcoming and inoffensive air. A golden key on a chain rested prominently on his chest. He wore fine Venetian silks in the latest fashions, and his knife looked far more ornamental than functional.

As a Tzimisce abiding in Venice, Lando was a curious novelty in the courts of the Lasombra and Cappadocian merchant princes who rule the nights in Veneto. Since AD 1169, he used his Dalmatian and Croatian contacts to import lumber to the hungry ship-building and glassblowing trades of La Serenissima while exporting glass and cloth back across the Adriatic in turn. In addition to these interests, he had a lucrative sideline offering his services as a “mystical physic” to the merchant nobility of his chosen home. Inveigling his considerable skill with Vicissitude by disguising its use as various health regimes, alchemical processes, and mystical arts, he ensnared dozens of women (and not a few men) with the promise of longevity. Naturally, this unnatural process was costly and temporary, ensuring a constant revenue stream for the Tzimisce through their subscription to his services.

In addition to his own nava, La Fenice (the Phoenix), Lando operated out of a villa owned by the Genoese Grimaldi family of merchants, making use of their capital and vitae in return for his undead patronage. They served as his herd and his retainers, apparently readily offering up their innocence in return for the promise of immortality. He made great use of their contacts on top of his own, and excelled at mobilising their farther flung assets without their apparent knowledge. In this capacity, he managed to divert six of the family’s ships as transports for the Fourth Crusade, thus earning himself a minor but influential position within the Venetian coterie known as la Fratellanza Serene (the Serene Brotherhood).

Originally hailing from Genoese trader stock based in the port city of Durazzo, Lando operated out of a number of cities along the Adriatic Coast in his time. In Venice he was a noted rogue, much admired for his devious wit at Elysium and for his skill at building trade networks both legitimate and illegitimate. His late sire and mentor, Paul of Ancona (once known as Mantarci), was of a similar disposition — based out of the Dalmatian port of Zara, he was a noted descendant and agent of the failed voivode known as Visya, tasked with using his knowledge of matters mercantile to funnel information and silver to his master in Transylvania. He served in this capacity for more than 70 years, using Lando and several other progeny to manage his separate networks. Like Paul himself, upon their Embrace all of his childer were required to take the Blood Oath to Visya, so that the distant voivode could be sure of their loyalty. Paul went to the Final Death along with his prince, Cosimo Lucretia in the Zarayan uprising of AD 1186 which saw the city temporarily fall under the control of the Hungarian king. After the fall of Zara to the Fourth Crusade in AD 1202, Lando made no secret of the fact that he now considers his sire avenged. Any furthers profits would simply be “a happy recompense” should the crusade be a success, and he spoke several times of settling in Zara once the dust of the pilgrimage had settled.

Lando did not consider himself an enemy of the Concord, even though his membership in the Serene Brotherhood left them at cross-purposes. Indeed, when Lando met Veceslav Basarab shortly after the coterie arrived in Venice, he graciously offered his villa to the Concord for the extent of their stay. Unfortunately, this did not include the unwarranted use of his herd, and Lando was furious to discover that Sir Gunthar was feeding on them without his permission. Despite his rabid indignation, when the Gangrel (belatedly) sought his forgiveness, the Tzimisce showed his generous nature and quickly forgave him, appearing to forget the matter for the remainder of their limited association.

As the Fourth Cainite Crusade and the Families of Constantinople circled closer and closer to conflict, Lando and his business partner Remigio del Nero drew closer and closer to the side of Salvatore Varagine and Carmine Giovanni, choosing to make use of the large numbers of bodyguards with which the leaders of the Serene Brotherhood surrounded themselves. He chose to maintain cordial, if distant, relations with Veceslav Basarab, but had little to do with the rest of the Concord.

During the Great Sack, he was among the Serene Brotherhood when they attacked the Monastery of St. John Studius in order to loot the library and destroy the Gesudians. He was present for the attack on the Saint of the Divinity Within, who begged them all to flee and save themselves as Salvatore Varagine, Brother Carmichael, and Remigio del Nero all used the Arms of Ahriman to restrain him. Lando was among those who closed in on the elder, his lips drawn hungrily back away from his fangs. With him were Innominatam Stulto and Carmine Giovanni, but the look of pleading urgency in Gesu’s eyes was clearly lost to them in their single-minded thirst for his heart’s blood.

It was not lost, however, on several members of the Concord who had stormed into the subterranean chapel to save the Saint of the Divinity Within. They now looked on in horror and trepidation as his form began to bulge and elongate, but still Lando and Carmine supped greedily on the vitae of Gesu, mindless in their hunger. Only the Nameless Fool was smart enough to guess what was happening and he withdrew his fangs and slowly backed away towards an open secret door in the apse.

Suddenly, barbed tentacles surmounted by fanged mouths and covered in blood red eyes tore themselves free of Gesu’s abdomen and back, the very size of the monstrous things defying understanding, seemingly much larger than the form of the Tzimisce should be capable of harbouring. Indeed, it would appear that while the Saint was apparently resigned to his fate, the Divinity Within was not. Perhaps in his centuries-long esoteric meditations on the nature of the transubstantiation of the Blood of Caine, he had touched something beyond the ken of men and the monsters they make? Something that had returned with him, and now fought for its existence even while he was ready to cast his aside. Gesu stood, his face transfixed by a mixture of transcendent pain and fearful perturbation as the tentacles struck out, seeking to throw down the Serene Brotherhood.

As the Concord steadily cut down the ghouls of the Brotherhood and struggled against their Cainite foes, Gesu’s attackers were thrown off one by one. Lando was hurled through a narrow pillar with a sickening crunch, careening off into the darkness of the eastern transept. He must have fought back to consciousness less than a minute later to fully comprehend their peril — his peril. Innominatum Stulto had fled, and Brother Carmichael was obviously dead, his head torn from his neck and a tentacle feasting on his heart and innards. As he watched in horrid fascination, Salvatore was grasped, then lifted and repeatedly pummelled into one of the chapel’s pillars until the column cracked from the force and he was reduced to so much meat. Carmine sought to run, but his face was smashed by another strike from a heavy tentacle. His jaw hanging loosely, and his teeth a jagged ruin, he pathetically dragged himself through the secret door in the apse. Remigio too was snared, thrown into a pillar and then the ceiling before his arm was torn loose, his agonised screams echoing as a section of the vaulted nave collapsed upon his legs. It was clear that the Divinity Within would bring the ceiling down upon them all in moments, and Lando must have considered that he stood no chance of escape.

None, perhaps, save one.

Clouds of dust obscured the room as Gesu motioned, weakly, for the Concord to flee and save themselves. He sagged with weakness and hunger, and Lando must wondered if the stories he had been told of diablerie were truly true? Could he take the soul of the Saint of the Divinity Within and use the elder’s Vicissitude to flee? As they fled the collapsing chapel, the Concord saw Lando dash from the transsept and leap upon Gesu’s back. As the ceiling came down, so did the fangs of the audacious ancilla upon the neck of the dying elder.

Neither Tzimisce has ever been seen again. Both are quite rightly presumed to have found the Final Death, buried under hundreds of tons of masonry.

Lineage: Childe of Paulo d’Ancona aka Mantarci (d), childe of Targuilu (d), childe of Andras (d), childe of Sambriak (d), childe of Visya; further lineage is unknown but Lando was thought to consider himself of the 10th generation. Most of Lando’s bloodline had been destroyed either protecting Visya’s assets against rival voivodes or through the constant invasions of the Balkans and Dalmatia throughout the 11th and 12th centuries. 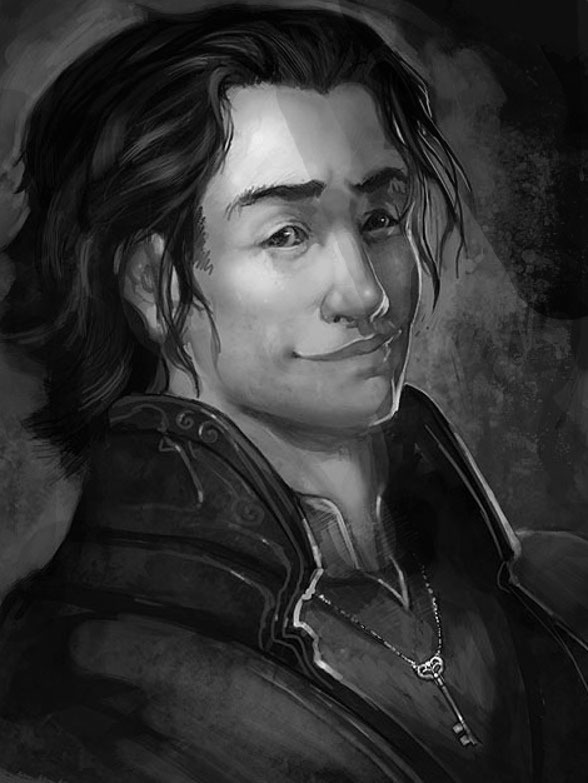