This prominent ancilla of the Holy Roman Ventrue is High Lord Hardestadt's diplomat. Lanzo served as Hardestadt's agent in the 4th Crusade.

A tall, brawny, aging German nobleman with a severe cut to his silvery blonde hair, lively blue eyes and strong features. He is dressed in russet velvet cut to show off his impressive frame, and a cloak of bear skin adorns his shoulders. He is armed with a long dagger.

(Expanded from the character as presented in Bitter Crusade, p. 96).

Lanzo was born the youngest brother of Billung von Stubenskorn, who would go on to found the noble house that would eventually produce Bernhard Billung over a century later. From their castle on the Kalkburg of what would one day be called Lüneburg, Count Billung and his family were charged with bringing both German law and Christianity to the pagans of the unruly eastern marches, and while he did not earn the political recognition that his son Hermann I would gain with the approbation and trust of Otto the Great, he and his brothers did much to secure Holy Roman power across the Elbe. While Billung earned most of the glory in this mission, it was Lanzo’s deep passion and commitment to the cause that earned the interest of the Ventrue elder Hardestadt the Elder. Then Lord of Bavaria, the famed elder was just one of several prominent Cainites vying for supremacy in the nascent empire that King Otto I was just beginning to build. Hardestadt required an instrument in the rising territory of Saxony, and although he found the right mix of piety and ruthlessness in Billung, Lanzo had more potential as a servant.

Lanzo was a perfect candidate for the Embrace, and Hardestadt sent one of his inner circle, Guntramus, to bring him across. At first repulsed by his new state, Lanzo learned in time to accept it as a blessing. Immortal, he could guarantee that the newly reforged Holy Roman Empire would assume its proper place in Christendom- with the Ventrue as its guardians. By the turn of the 11th century, he was ensconced in the Holy Roman Imperial court, where he acted for Saxony’s interests as well as that of all Christendom. His way has always been that of the gallant: passion, duty and religion are all to Lanzo, and he rarely thinks before following any of them.

Since then, he has protected his native land from afar, working hard to see that Ventrue occupied the thrones of every emerging city. In AD 1070, he learned to his disgust that a Gangrel elder, the miscreant known as Lucien the Roman, had had the temerity to Embrace one of his mortal brother’s own descendants, Bernerd. By then, however, his attachment to the House of Billung was little more than a memory, and Lanzo did not grieve when the house died out a generation later. Lanzo now dedicates himself to the idea of Saxony itself, inside the protective aegis of militant Holy Roman Imperial German Christianity.

In addition to furthering the cause of Christianity, Lanzo von Sachsen considers the Crusades an important strike against the Assamites and Settites, both of whom he sees as insidious enemies of Western civilisation. To that end, he long supported the Byzantine Empire as a bulwark against Islam, and he hoped that wrangling over matters of religious authority would not interfere with the goal of beating back common enemies.

Lanzo attended the Cainite council of the militi christi in Venice, where he argued for Egypt as the destination for the Fourth Crusade. In this cause, he was aided by the knights Roland du Rochere and Aimery de Versey , both of whom had extensive experience with the Crusader Ventrue and the tenuous political situation of the 2nd Kingdom of Jerusalem. Sir Roland had a skill at Socratic argument that Lanzo lacked, and the smooth Sir Aimery had an enviable skill at winning fence-sitters over in isolated discussions. Their just cause had all but succeeded when Sir Roland was foully murdered. Seeing his carefully laid plans destroyed, and never one to think before leaping into emotional displays, Lanzo immediately accused his Low Clan kinsman Bernhard Billung and his companions Sister Maude and Veceslav Bararab on the scantiest of evidence. Whatever the outcome of the investigation that followed, Lanzo looked the fool- leaving his enemies well-pleased.

Once the investigation was concluded, Lanzo immediately apologised to the Concord, stating that his impulsive accusations were unworthy of both his station and their now clearly demonstrated good character. He offered the coterie a minor boon in compensation, and left the matter to stand rectified. The Holy Roman Imperial ambassador elected to travel with the pilgrimage to act in its best interests, and was accorded a place of honour on the small council. The damage to his reputation in Venice was such, however, that he was considered a spent force.

In the many months after the crusade became diverted first to Zara and Corfu, and then to Constantinople, Lanzo grew increasingly uneasy with the course of the pilgrimage. In council he spoke frequently of the need to conclude the financial troubles of the crusade and direct its energies where they belonged- the safety and security of the Holy Land from the hordes of heathen Paynims. Sadly, while everyone in the small council allowed that his rhetoric was sound, words and action were entirely different. Promises had been made by Alexius IV Angelus, and satisfaction must be gained. Resentfully, Lanzo was forced to subside into fuming, impotent silence as the situation degraded to the point of war over the Christmas of 1203.

Even so, when the city fell in April of 1204, Lanzo and his people participated in the Great Sack. Of course, he claimed it was only to ensure that enough funds would be gathered to see the 4th Crusade recover and move on to Egypt, but the implosion of the Families and the destruction of Michael the Patriarch gave him new ideas. Perhaps with he as prince and the resources of the Holy Roman Empire behind him, not just the 4th Crusade but every subsequent pilgrimage could have a stable staging point to launch new campaigns in the East? How could Islam survive such a righteous new regime? In the months after the Great Sack, Lanzo von Sachsen lobbied hard for the support of the remaining potentates of the crusade, concentrating in particular on the rising power of Hugh de Clairvaux.

Rumour has it that Lanzo was but one of several magnates who approached the Templar champion with a proposition that if he used his groundswell of support to place them on the throne then they would in turn use the resulting resources at their disposal to place him at the head of an army in Egypt. Unfortunately, with the assassination of the valourous Brother Hugh in August of 1204, any plans to revivify the Fourth Crusade fell to pieces in violence and recrimination. Lanzo’s hopes also died with the valourous Templar, and by the summer of 1205 he had returned to the courts of the Holy Roman Empire. He remains active there as one of Hardestadt’s diplomats and advisors.

Lineage: Lanzo von Sachsen is of the 8th generation. He is the childe of Guntramus, a prominent trouble-shooter who makes his way about the Holy Roman Empire on the High Lord’s business. Guntramus is the childe of Prince Felix of Passau, a noted clan historian and skilled politician who has long vied against the Tzimisce of Bohemia. Felix is the childe of Hardestadt, preeminent among all vampires of Germany, with many vassals based out of Bavaria and Swabia. The High Lord of the Cainites of the Holy Roman Empire has always been evasive concerning his own sire, but others believe it to be Erik Eigermann (d?), who was long the most preeminent of Germanic Ventrue in the first millennium. Eigermann is, or perhaps was, the childe of Ventrue. 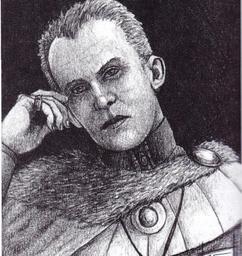