This brutal, roguish Varangian giant claimed the title of Prince of Thessalonica in AD1200. He cared little for manipulating mortal affairs, and appeared to crave recognition only from his fellows. He was reportedly slain in AD 1204.

A mighty Varangian warrior, dark of hair and eye and close to seven feet tall, with arms as thick as most people’s trunks. He wore a few days growth of beard, showing off his formidable scars to full effect. His right eye was filmed over, crossed by a particularly vicious cicatrix. Despite his fearsome appearance, he was quite handsome in a rough sort of way. He carried a dane-axe, and had a sword and dagger belted at his side.

Lars Sveengard was not a complicated Cainite. He desired little more than women, war, blood and recognition of his self-appointed role as Prince of Thessalonica. The city, capital of the province of the same name and a important trade hub of some 90 000 souls was considered the “second city” of the Byzantine empire after Constantinople (challenged perhaps only be Nicaea), and since Frankokratia was established, it has been the capital of the Kingdom of Thessalonica. It was taken by Lars and his allies in a show of brute force in the Spring of AD 1200. A large coterie comprised of ten Varangian Tzimisce, Ventrue, Brujah and Gangrel, they held on to praxis there by virtue of bloody, excessive displays of violence when threatened. However, the rest of the time they seemed content to wile away their time carousing, hunting and sparring with each other at the large port-side inn known as the Crow’s Nest.

A skilled captain and a frighteningly impressive specimen, it was easy to imagine how Lars came to lead his Ravens. However, how he came to be brought across is something of a mystery, as are his early years among the undead. It is known that as a mortal he was employed in the Varangian Guard of Constantinople during the last years of the reign of Alexius I Comnenus. He became a minor celebrity in the city, known for his lusty ways, insubordinate, daredevil antics and brawling escapades. When his emperor passed away in the Autumn of AD 1118, Lars and the rest of the Varangians rushed to the treasury and carried away as much gold as they could (as was their customary right). He then left the city, claiming that he intended to return to his ancestral home on the shores of the Baltic.

Some ten years later the Varangian, now a Cainite, was once more in Constantinople. He claimed descent from the Tzimisce, and yet admitted to lacking any real understanding of his lineage, nor even knowledge of his sire’s name. Even so, he clearly had powerful blood in his veins and his skill with arms had only been enhanced by his new condition. Lars petitioned the Antonian Military Prefect for inclusion in the ranks of Bulgarian Fiends who were then in the employ of the Ventrue. Recognising his quality, Belisarius accepted and Sveengard accompanied the great general on many of the bloody campaigns of the reign of John II Comnenus. Lars cared little for financial reward during the 20 years he served Belisarius. Instead he asked for permission to create further progeny from the Varangian Guard, under the aegis of the Military Prefect’s patronage of course. As this strengthened his own position, Belisarius also agreed to this form of payment.

After the fall of the Comnenus dynasty and Belisarius’ subsequent retreat into retirement, Lars found himself at loose ends. After a number of years adventuring on the Bulgarian frontier, he conceived of a desire to establish a domain of his own. Spying a power vacuum in the city of Thessalonica, its Cainite population having all fled or been destroyed in the Norman Invasion of AD 1185, Lars determined that the mewling, fractious Cainites that had taken their place were no match for an organised coterie of bold, militarily experienced ancillae and neonates. He set about calling various allies to him, expending boons owed and promising others in the future to potential allies.

After a number of years of preparation, he struck into the city in AD 1200. Twelve other Varangian Cainites accompanied him, as well as the opportunistic elder known as Gabor the Bulgar and his capable childer, Veceslav Basarab and Grozdan. Those few enemies with a will to fight were vanquished and destroyed with ease by the experienced warriors. After 3 nights of blood and fire, the surviving members of the Varangian coterie (dubbing themselves the Ravens in honour of their shared past among the Emperor’s Guard) were victorious. Lars declared himself prince and remained so for some years.

In his guise as the Toreador fence Marius, Lotario Acuto visited Thessalonica in June of AD 1203. He presented himself to the prince and the two struck up an unlikely acquaintance. The Tzimisce was duly impressed with the speed and accuracy with which the Toreador assessed the security and strength of the mundane and Cainite defences of the Crow’s Nest (including a curvaceous female who spied on him from a supernally darkened room on the floor above). In return, Lotario found Lars to be a disarmingly gregarious, warm and enjoyable host, though a number of his Ravens were more suspicious of “Marius”. After spending a number of weeks in the city to cement his new disguise, the Toreador moved on to the capital, promising to himself that he would return to enjoy Thessalonica in happier nights…

Such was not to be. In August of 1204, a large coterie of Cainite Crusaders secretly approached the city, accompanying the army of Marquis Boniface of Montferrat, who had designs on founding a kingdom with Thessalonica at its heart. Led by Thibaud of Bayeux, these vampires had recently come together after the assassination of Hugh of Clairvaux had dashed their hopes of continuing on to Egypt, and now they looked to make up for the domains they had missed out on or given up in preparation for the continuance of their mission. Ahead of the arrival of the Latin army there was widespread panic and rioting on the streets of the city, and mortal agents of Thibaud took advantage of the chaos to fire the Crow’s Nest at high noon. Lars and several of his followers, sluggish with sleep, were trapped in the building as it was engulfed in flames, and they did not make it to safety as the inn collapsed. The survivors were attacked by the Cainite Crusaders that night, and of all the Ravens only Gunnald Ivarsøn and their ally Grozdan of Trnovo are thought to have survived.

Lineage: Unknown to most. Lars mentioned that his sire was a northern warrior who hunted him and took his life, but was impressed enough by his martial might to give him the “Dead Water” before abandoning him. Given his demonstrated strength of the blood, he counts himself among the 7th generation. The Concord know that the true sire of Lars was none other than Gabor, sire to Veceslav Basarab and Grozdan of Trnovo, marking him as belonging to the lineage of Demenaus, Ionache, and of course, the Eldest.

These Cainites were all relatively young, but they saw more combat than most vampires will see in centuries. They were all fiercely loyal to Lars, not so much because they seem him as their prince but rather because they saw him as their brother-in arms. 3 of their comrades (another 2 of Lars’ progeny, plus another descendant of the Bulgarian Tzimisce) went to the Final Death taking the city, and the rest would join them before surrendering. In addition to Lars, these Varangian worthies included: 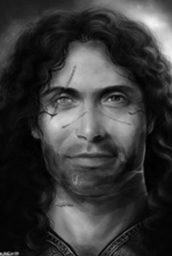