A brash, overconfident and good-natured nobleman, this ghoul served as bodyguard and herald to Veceslav Basarab. He was slain during the Siege of Toth.

A handsome, graceful young man with long brown hair, mischievous brown eyes and a smug smile plastered to his face. He is dressed in the finery of a courtier, though his sword and dagger look serviceable and well used.

Laszlo Szantovitch Gutkeled was a scion of a prominent union between a western Hungarian family and an eastern Bohemian one. His primary motivation was to enjoy himself in any and every possible way that he could, and he lived life to the full. This pursuit of extreme pleasures never quite extended so far towards the darker passions like many of his older kin, though this was more from lack of experience than lack of desire. His need to experience the wider world was just one of the reasons he sought permission to join his new master, Veceslav Basarab on his travels. The other was his hope of one night earning the Embrace. Unusual for a one of the Szantovitchi, he enjoyed the experience of battle and even before taking service with Veceslav he had become a proficient duelist (though he was always careful to don his helm and mask before a fight).

Gabor the Bulgar was always suspicious of Laszlo’s lack of discipline, but seemed to value the man’s connections in Esztergom to some extent. He punished him particularly severely in the past for placing his own self-aggrandizement above Veceslav’s safety, but also gave him the chance to prove himself. As a result, Laszlo shadowed his master wherever he went, and his blade was always ready to answer danger or insult to his domitor.

He served Veceslav for 9 years, and the coterie in general knew him for 6. Unusual for a ghoul, Laszlo apparently knew the Discipline of Presence. While his callousness and laxity sometimes earned him censure from his Cainite masters, and Bernhard in particular on at least one occasion, his charisma, versatility and readiness to answer any danger to his master with his own sword made him a stalwart of their mortal entourage. Veceslav in particular was fond of his cavalier attitude and his sense of style. Strangely, Laszlo displayed a most out-of-character tenderness and gallantry towards the Vlach noblewoman Sherazhina, and the two developed a strong platonic friendship during their years travelling with the Concord.

Laszlo perished while defending the walls of Toth from a midday assault in early January of AD 1203. His vampiric masters were less struck by the reports of his heroism, and the many foes he took with him, as by the fact that his face was completely unmarred by the multitude of wounds that had finally brought him low. His self-vaunted battle mask had finally proved its worth…

In the wake of his death, Veceslav wrote to Laszlo’s aunt, Lady Sebastiana, to give her the news of his demise and his regret that he had not Embraced him before it was too late. The Hungarian matron understood the unfortunate situation, but held him to his promise that he would grant the Becoming to one of her kin. Indeed, Laszlo’s younger brother Kelemen was sent to personally hand the Knez of Tihuta her returning correspondence, announcing her choice for Laszlo’s replacement in his service. 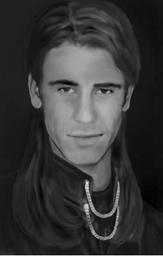