This fledgeling of the Magnus Orthodox Lasombra was a charismatic preacher and a talented, albeit unbalanced, Cainite. He was destroyed by Malachite and his allies during the Great Sack.

Libanius appeared to be a handsome, clean-shaved Orthodox cleric in his early twenties. He was quite tall and carried himself with a certain fervent energy, though his mien was that of a scholar rather than a natural leader. His light brown eyes had a fanatical light in them. While his robes were plain, a large golden crucifix adorned his chest, and a ring depicting the Archangel Michael was worn on his pinky. The priest customarily appeared to be unarmed.

(Expanded from the character as presented in Dark Ages Clan Novel Nosferatu).

Little is known of Magnus’ fledgeling prior to his Becoming in April of AD 1201. It is understood that he was but the latest in a long line of replacements for the embarrassing failure that was Peter the Humble, who has failed to prove himself in some eight centuries of existence. It is also known that he was a minor priest and an accomplished scholar native to Constantinople whom Magnus had guided through the ecclesiastical hierarchy with some swiftness.

After entering the ranks of the Magnus Orthodox family, Libanius showed himself to be an adept politician capable of equalling Peter’s pitiful influence over the clerical bureaucracy. Unfortunately, he also showed himself to be somewhat unbalanced in his own right, perhaps due to his premature access to the glorious sight of the torpid form of the Patriarch, or perhaps due to Magnus’ overbearing influence.

Whatever the case, Libanius was an enthusiastic follower of his sire, and deeply respectful of the role his elder sister-in-blood, Sarah the Chaste, played in the Cult of the Archangel. For her part, she allowed him to conduct the odd mass in order to build his confidence and test his worth. Libanius also sought to expand his family’s influence into new areas, and even succeeded in befriending some of the younger members of the Baron’s Gangrel, although his hopes of inducting them into the cult proved to be hollow.

As the city fell, and his sire was staked and given over to the Narsene Lasombra by none other than Sarah, Libarnius’ fragile hold on his sanity broke. He called as many of the Cult of the Archangel that he could draw together at the gates of the subterranean haven of Michael, and there they engaged in days-long, extended, fanatical rite of prayer and supplication in hopes of bringing their demi-god forth to destroy the schismatic crusaders. They denied themselves food and water, then incessantly scourged themselves and each other in the mad rite, driving themselves into rapture from pain, hunger, and dehydration.

The tale has it that the elders Malachite and Lady Alexia, as well as certain among the Knights of St. Ladre and the Gangrel Verpus Sauzezh, came across the cult as they sought to make access to Michael’s haven to seek answers as to the rumours of his destruction. Enraged by the blasphemous display, Malachite sought to disperse the cult, but was instead attacked by Libanius. In response, the followers of the Nosferatu elder put down the insane fledgeling, tearing he and a good many of his followers to pieces. 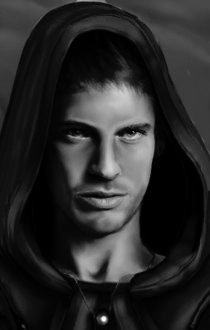