This slightly built Italian vampire of the Clan of the Rose is an expert investigator as well as a trader of information and'items of questionable origin'.

DESCRIPTION
Lotario is an Italian man with a slight build and fine boned handsome pale features. He is usually dressed in local fashions and blends in to his surroundings. He is quiet and observant, confident and, when engaged, comes across as a both trustworthy and clever. He is rarely armed, but does carry a small knife, a tool not a weapon. He often carries a wax tablet and a stylus for ad hoc note taking.
During times of impending conflict, Lotario dons plain steel helmet and an old chain hauberk with quilted leather padding. Despite claiming to be very uncomfortable in this outfit or at the thought of physical confrontation, the Michaelite has repetedly proven himself capable and courageous in the face of violence and danger.
The Michaelite is adept at disguise, and often alters his appearance when moving about the volatile streets of the Latin Quarter, appearing as a normal city-dweller. He is often unrecognised and unassuming until he slips his disguise and reveals his presence.
Events surrounding the Sack of Constantinople led to Lotario hiding away in the warrens and underbelly of the great city. He lives a down-trodden life, a shell of his former self, fading away into an oblivion he lacks the courage to seek more directly.

PERSONALITY
Lotario judges people, places and situations constantly. He is always looking for angles and trying to figure out what is behind the scenes. He is restless when he spends too long on one thing, or with one person. He seeks out new experiences as often as he can.

He is kind to people and seeks to avoid hurting them. He takes care when he feeds, and tends towards the Seducer or Sandman methods. He is loving to his two retainers, Myra and Alfonzo. Those travelling with Lotario note that, when staying at inns or in a house, he sleeps with both of them. Both Myra and Alfonzo are devoted to Lotario, and the three are quite close.

Lotario seems to be a physical coward, avoiding confrontations wherever possible. Yet he undergoes physical training nightly, keeping himself reasonably fit, strong and supple and engaging in hand fighting with his companions and allies. This training is, whenever observed, very light in intensity.

Lotario is a skilled investigator and a jack-of-all-trades. He is also skilled at disguises and habitually changes his clothes and accent when meeting strangers. “Never show up as yourself,” he says.

Lotario likes animals and they like him. His companions keep several hounds and these constantly sniff Lotario in a friendly fashion, as if meeting him for the first time each night. While Lotario cannot speak to animals, they find him calming and do not react to him in the way animals react to most vampires.

PUBLIC BACKGROUND
Lotario does not speak in detail about his background. He has travelled widely. When talkative he often will start a tale with “when I was in such-and-such-a-city”, but never gives the details of why he was there, or what he was doing “an investigation”, or “work for some friends”, is all he ever says.

Lotario has a dislike of Arabs, slave-traders, and flesh-peddlers.
He has a young-man’s love for a “lady far-away”. Again he never gives details.

Lotario comes from Constantinople, is a Michaelite and says he works for Petronius. Further information on his background remains a mystery.

The Michaelite, while often profession fear and nervousness at the very suggestion of physical confrontation, has never-the-less proven himself to be remarkably competent in personal combat. This, together with his confidence in dealing with the intricacies of Cainite society and existence, has led the coterie to suspect there is far more to ‘Lothario’ than he has let on.

ALTERNATE IDENTITIES
During the ‘siege’ of Constantinople by the Crusaders, Lotario has located himself in the Amalfatine Quarter of the Latin Quarter under the guise of a weak-blooded Tordeador (12th Generation) named ‘Marius’. Marius, originally from Napoli (where he quarrelled with his sire, Jiodano the childe of Antoni of Sicily) but lately from Thessalonica, has come to Constantinople looking to make a home. He is a fence and has a talent for finding out information. Marius is working secretly for Gregorio, the Scourge of Bishop Alfonzo. Marius has busied himself learning all about the Latin Quarter and trying to establish a network of Herd and Contacts there. Marius was last seen before the great fire, and has not been seen since.

Michael of Pontus was a merchant sailor – well, mostly merchant, but every sailor is part-pirate – in life and in unlife. He was Embraced by a Tareador calling himself “Caius of Smyrna”, an agent of the Anotnians of Constaninople. Michael served in this way for a decade, running shipping along the Black Sea coast. Leading up to the Crusade, Michael grew more and more discontent with his master and the slave trade in which Michael was forced to engage alongside the tax shipments he supervised. Michael learned that the slaves were sent to be part of demonic blood feasts. He wanted out. The Crusade provided him with the opportunity and he jumped ship and left his master, seeking out the Crusader camp. After a time hiding in the Latin Quarter, the fire drove him out and he fled across the water, seeking sanctuary.

“Raza inbin Fasul” is Lotario’s new identity. He speaks Greek and Latin with a slight Arabic accent. He is a Turkish mercenary scoping out the ports, amking sure no-one knows about a shipment of silver coming in. Damn, I shouldn’t have said anything… 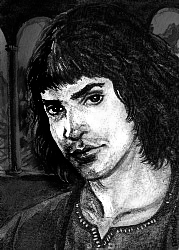