A beautiful Lasombra diplomat representing the interests of her sire and clan at large, Lucia d'Aragon has come into her own in the treacherous political waters of the War of Princes. She moves between Madrid, Barcelona, and Constantinople regularly.

A tall, lithe beauty with a dusky, classical skin tone, luxurious long black hair and imperious brown eyes. When first encountered by the Concord, her manner of dress was very much out of step with her haughty and noble manner. A heavy cloak and a traveling dress of exotic style marked her as belonging to wealth from a distant land, and stranger still, she was openly armed with several daggers and a sword.

These nights, Lucia is far more likely to be found dressed in the height of Iberian and Constantinopolitan fashions. As a diplomat for the See of Shadows, she prefers sombre, conservative colours touched off by bright yet tasteful jewellery. If armed at all, she will keep a simple dagger for protection.

The natural daughter of King Alfonso II of Aragon and Urraca, one of his early royal mistresses, Lucita is a true rarity even among the High Clans as she is a Cainite who happens to also be an influential member of a current royal family. Few vampires are brought across from such a station, as they are often judged to be an immediate threat to the Sixth Tradition. However, in this case the young vampire has proven to be a profound if unorthodox asset to the Lasombra clan.

In her breathing years, Lucia was a willful, tomboyish and rebellious girl, and she was frequently sent to confession in order to expiate her sins. There she met King Alfonso’s personal confessor, the pious and yet terrifyingly sinister Archbishop Ambrosio Luis Monçada, who took a personal interest in her development. It was the shadowy confessor that first took to calling the girl Lucita, and the name has stuck in Cainite circles. Eventually the archbishop managed to gain permission from his elders to bring her into the clan as a political asset, under the pretext that it was necessary to have a Cainite with access to the royal circles of Aragon to finalise the tide of the Reconquista. Such a request would usually be refused, for to Embrace those who live in the public view so prominently as royalty is a danger to the Silence of the Blood. For the intents and purposes of satisfying this requirement, Lucita publicly retired to a convent outside of Madrid, where as far as her family is concerned she is thought to still reside.

In the years since her Embrace in AD 1190, Lucita has transferred her rebellious spirit and precociousness to her sire, and the archbishop has had considerable difficulty reining her in. The death of her father in AD 1196 brought her younger brother to the throne as Pedro II, and a dynastic marriage for her sister, Constance, to King Emeric II Arpad of Hungary. Lucita seized upon the opportunity to tour the east, with her sire’s blessing and as his agent in diplomatic matters. She made the acquaintance of Anatole in the months after leaving her homeland and the two became fast companions who remain fiercely loyal to each other, despite the intervening years and lengthy separations.

Lucita and Anatole met the formative Concord at the site of the ruined Basarab tower in the Tihuta Pass. Fuelled by Anatole’s visions, the two of them had journeyed there to look for some mystery of the ancients that was buried in the foundations of the tower. Initial caution was thrown aside when both sides realised that much was to be gained by working together, and an accord was struck. Recognising the claims that the Concord had to the property, the two of them helped dig out the secret room in the foundations in return for access to the mystery, which turned out to be the writings of a mad Antediluvian in a dead language, as well as a translation to disk to decipher it. Most of the coterie were charmed by the Aragonese princess, and she in turn took warmly to Sir Gunthar, Iulia and Sister Maude Khlesl. She was deeply impressed with the credentials of the Templar Brother Alaric as well, though she found his ignorance of his lineage unsettling. The two coteries soon parted amicably after achieving their objective. All shared in the mystery as the Concord took possession of the writing and the disk, while Lucita and Anatole made copies of both.

Several years later and without the company of her Malkavian mentor, she would encounter the Concord once more during the formative months of the assembly of the Fourth Crusade in the city of Venice. As a member of the delegation of the Sea of Shadows, she was very much a subordinate of the older Tommaso Brexiano, whose duty was to push the crusade towards Outremer instead of Egypt. In this task, they failed, and Lucita communicated to Iulia her private misgivings about Brexiano’s spinelessness and flawed political rhetoric. It was clear to vampires of the Concord that the Narsene Lasombra of Venice disliked and mistrusted Lucita and Tommaso, who represented the interests of their rivals in Iberia, Naples, and Sicily. The two Lasombra diplomats left the crusade before it moved on from la Serrenisima but they reappeared in the closing months of the siege of Constantinople in AD 1204, this time in company once more with Anatole, who had gathered a throng of equally devout Cainites and mortals around him.

At this point, the Lasombra delegation and their Malkavian ally were very much in damage control, but again they failed to turn aside the destructive path of Duke Guy and his followers. After the city fell, Lucita and Tommaso took a small part in the sack, but they and their men were far more restrained than the Franks and the Venetians. True to his nature, Brexiano fled the city shortly thereafter, but Lucita remained to see what she could salvage of the disaster for her masters.

Over the course of the following years, the young Lasombra diplomat involved herself heavily in the intrigues surrounding the struggle for Cainite princedom of the new Latin Imperial capital of Constantinople. Eventually, she settled on supporting the nefarious but powerful Alfonzo of Venice, who she found to be the only candidate to have the will, wealth, and skill to win the contest. After revealing treacherous betrayals from the bishop’s own sire and master, Narses, Lucita managed to earn the respect and gratitude of Alfonzo and when he declared his praxis in the winter of 1206, he simultaneously repudiated his sire and the Cainite Heresy as well as declared his new loyalty to the Sea of Shadows as a vassal of Monçada.

In addition to gaining great kudos and status for her efforts in this matter, Lucita was also named the ambassador for the Sea to Constantinople and given the Right of Progeny by Prince Alfonzo. She immediately chose for her first childe his seneschal, Matteo, and settled quickly into her new role as liaison between Byzantium and Madrid. Until Iulia departed the city in AD 1209, she and Lucita continued their association, and the two young Lasombra still trade correspondence. By the Battle of Las Navas de Tolosa in 1212, Lucita was moving regularly between Aragon and the Latin Empire, while Matteo remained behind both as student to Alfonzo and as a hostage should Lucita dream up new ideas regarding her role in the new order.

Although her father has passed away, Lucita still enjoys tremendous influence through her family, and involves herself in their politics from afar. She maintains her cover as a cloistered nun and scholar, while her sire ensures that any correspondence from her kin finds her, and that her words reach their eyes quickly when she gives counsel. Constance, having been widowed in 1205, is now the Holy Roman Empress and Regent of Sicily through her marriage to Frederick II. Her brother, Pedro II, was slain at the Battle of Muret in 1213, attempting to drive the Albigensian Crusaders from Toulouse, but his widow and regent, Queen Maria, trusts her pious sister-in-law’s advice as to the welfare of her son, King Jaume. Another of Lucia’s sisters, Sancha, is the Countess of Toulouse by virtue of her marriage to the much older Raymond VII and through her late brother, Count Alfonso II of Provence, Lucita is the aunt of Ramon Berenguer, who succeeded his father after he escaped his Templar captors at Monzón in1217 (with her secret assistance).

Lineage: Lucia d’Aragon is of the 7th generation by virtue of her sire’s diablerie of another Lasombra. She is the childe of Ambrosio Luis Monçada (diab.), an ancilla who has acquired frightening power in his relatively short time as a Cainite. Monçada does not reign as Prince of Madrid simply because he does not wish to do so, but all there accept his preeminence in the city and accord him the status of de facto prince. Monçada is the childe of Silvester de Ruiz, who is recognised as the preeminent Christian Lasombra in Iberia and the Lord of the Shadow Reconquista. He in turn is the childe Cleobolus, who may in fact be the Cleobulus of Lindos, one of the Seven Sages of Ancient Greece. Cleobolus is the childe of Karotos (d?), an elusive and obscure Ancient who has not been seen in many, many centuries, and could well have met his end at the fangs of his own demanding sire, who was known for reclaiming the Blood with little provocation. Karotos is, or was, the childe of Lasombra. 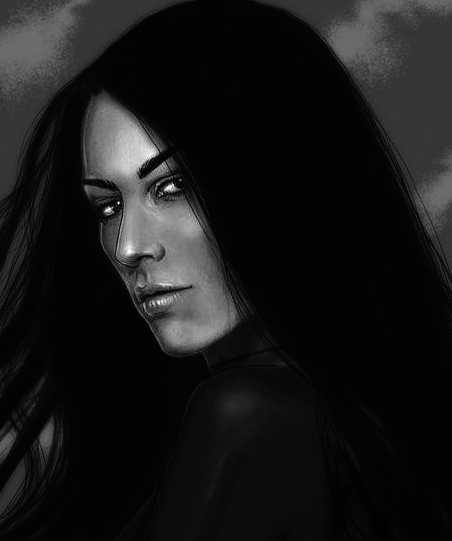