A scholar and healer, once resident to the Burgraviate of Kronstadt, this Nosferatu relocated to Constantinople in 1203. He resides there still, vainly seeking a cure for leprosy in the remnants of the medical libraries there.

When not using the illusion of the Mask of 1000 Faces, wispy white hair still clings to parts of this man’s otherwise smooth scalp and his face gives the appearance of having been dragged upward along cobblestones on the right side while the left droops into a deep jowl.. His black hooded robe usually hides most of his deformities, but his hooked hands protrude at inopportune moments.

Early in 1198, the formative Concord became acquainted with this Benedictine monk when he engaged in a mercy mission to help rouse Lady Perlina from her torporous state. Whatever the extent of the relationship between the two Cainites, it is clear they have known each other for some time. In gratitude for their kindness, he sent word to his grand-sire Zelios regarding the need for assistance in completing the work on constructing the tower in the Tihuta Pass.

Lukas resided outside Kronstadt for some time, although it is unclear precisely how many years he dwelt in the region. He made his home in the Priory of St. Lazarus, a leper colony in a small vale some 8 miles southwest of the city walls and just a couple of miles north of the newer settlement and fort of Rosenau, established by the Teutonic Order in 1212. The vale of the lepers opens out close to the road to the Törz gorge, and the company of unfortunates who dwelt there would venture out with their small bells and bowls to beg the passing merchants for alms. Lukas was not the prior of the colony, but he was its shepherd. He ministered to them and with the knowledge at his disposal he searched for a cure to their malady.

The first prince of the city, Heinricus von Ballen, knew of him but cared little for him, insisting that Brother Lukas feed only from his fellow lepers and remain outside the walls. During his short tenure as prince Bernhard Billung was far kinder, and was known to enjoy the company of the leper monk and his ghoul bear, Schildknappe. Indeed, the Gangrel appeared to rely upon the Nosferatu to “keep him honest” when his schemes grew too machiavellian for his own good. In fact, Bernhard trusted Lukas enough to leave him as acting prince of Kronstadt when he journeyed to Venice to take the cross for the 4th Crusade.

It was there that things started to go wrong for Brother Lukas and the Priory of St. Lazarus. Perhaps a year after Bernhard’s departure, a sickness struck his people and try as he might, all the skills and knowledge of the Nosferatu were unequal to the task of curing the fever that killed his flock one by one. In growing desperation, he called upon the aid of Beatrice, the agent of Sister Maude Khlesl, yet she too was unable to stem the tide of death that washed over the leper colony. She sought to send word to her mistress, who was more skilled than either of them, but there was no way of knowing at short notice where the 4th Crusade was quartered. Finally, the disease seemed to burn out on its own, leaving just a handful of lepers behind to bury their fellows and rebuild. Lukas was unable to comfort them. After all, had they not suffered enough before this travesty? His faith shaken, the monk fled in the middle of the night, leaving a note that he would return with answers to the scourge that had befallen them. For almost a year he wandered the lands of Muntenia, Bulgaria, and the Eastern Empire, consulting physicians, herbalists, and students of the natural sciences.

His will and his hope stretching thin, it was in Thessalonica that he heard of an ancient Cappadocian in Constantinople who possessed herbs, oils, and unguents that were beyond anything available in the best hospitals of either the East or the West. It was even said that this elder knew an ancient cure for the curse of leprosy. He was determined to seek out this Lady Alexia and entreat her to put her herb lore and medical knowledge at his disposal. He was prepared to give her anything in his possession, and promise her anything that wasn’t. Unfortunately, he arrived at the Queen of Cities late in December of 1203, when hostilities between the 4th Crusade and the Byzantine Empire were just heating up again. Lukas found himself in unfamiliar territory, outside a barred city that was practically under siege. The Cainite Crusaders initially laughed at his requests to move through their lines in good faith, but he picked out a banner with which he was familiar, and knew that one of his allies among the Concord was near.

Veceslav Basarab remembered Brother Lukas, and after several discussions with the others he secured him passage. The knez of Tihuta also told him that others among the Concord were within the city, hoping against the tides of fortune to bring an end to the conflict. Finally, he was told that his friend Bernhard had gone to the Final Death, slain by the Tzimisce warrior Timur soon after Lukas left Kronstadt. Although stricken with further grief, the monk resolved to make his way into the city to find Alexia Theusa. He used the arts of his Blood to evade detection, then he sought out Iulia and Maude to tell them of his woes. Neither knew of any cure for the condition of leprosy, but admitted that if anyone might, it would be Lady Alexia. Introductions were arranged.

Soon enough, he stood before the ancient Cappadocian, only to be stricken further by her indifference to his plight. She confirmed that she knew treatments, and that she even possessed some otherwise extinct herbs that would surely defeat leprosy. Coldly, she then told him that she could think of no reason to give him what little of those herbs she had, nor did he have anything that he could trade to entice her to change her mind. Brother Lukas tried anyway, even going so far as to beg, only to be dismissed from the interview with an admonition not to return.

The monk was at first confused by her cruelty, then distraught, and finally lost to despair. He wandered the city for weeks, sheltering in abandoned houses, sewers, and cisterns, feeding but little, and helplessly wallowing in the despair that seemed to hang over the city like a shroud. Finally, on the advice of Conrad of Monreal he was sought out by the knights of St. Ladre, who offered him a place among their number, for they had many sick and infirm mortals under their protection. Grateful for fellowship and something to do, and inspired by the example of Fra’ Raymond, he accepted.

Not even a month later, Constantinople fell and the Great Sack began as the crusaders descended upon the city in an orgy of violence and looting that would last for days as the city burned. Fra’ Raymond was killed when a building weakened by fire collapsed upon his haven and crushed him beneath tons of rubble. In the wake of his Final Death, the leadership of the Lazarenes fell to Fra’ Ignatius, but that worthy knight and a number of the other senior members of the Order were immediately compelled to accompany Malachite and none other than Lady Alexia to Mt. Erciyes. In their absence, Fra’ Osmund would lead, but he did so relying heavily on the advice of Brother Lukas.

At the beginning of AD 1205, Malachite, Ignatius and the others returned less Lady Alexia, who had encountered some sort of reckoning at the hands of her clan. By then, Lukas was an indispensable addition to the Lazarenes, and there he has remained for many years, looking after the health of the mortals under their protection. Many of the younger leper knights also seek his advice, for Lukas was nothing if not wise and compassionate. He longed to return to his priory, of course, but he could do real good for so many more people in Constantinople and besides, he still lacked his answers.

In 1208, at the request of the secretive methuselah Byzar, Iulia brought Brother Lukas to the secret haven beneath the ruins of the acropolis of Byzantium. It had been Alexia’s haven for many centuries, but it was now reclaimed by the sire that she had betrayed and imprisoned. Byzar claimed to have watched the monk from afar; he was impressed with Lukas’ generosity, compassion, his dedication and his self-control. Indeed, he wondered if the monk had ever heard of the exalted state of Golconda? If not, Byzar believed that Lukas should know of it, for few were more equipped to walk the “unmapped road.” Humbled, Lukas said that he did desire to know more, but how could he walk such a road when all his flock were still stricken by leprosy. It was then that the Ancient smiled benignly, drew back his cowl, and his 3rd eye opened.

Lukas has been a fervent, secret disciple of Byzar for many years now. They debate the teachings of Saulot frequently and at length, and the old one teaches him the secrets of Valeran. The going is slow, however, and in exchange for his instruction Byzar asks that the scholar undertake the painstaking work of deciphering the complex code that Lady Alexia used to record her rituals, observations, secret histories, and her extensive knowledge of herbalism. The irony is not lost on Lukas that now that the answers he has long sought may well be beneath his finger tips, it may take decades yet to decipher them. The healing arts of Valeran are much closer, it would seem, but he cannot shake the feeling that the Ancient slows his progression in those very arts because he desires others secrets in the cyphers.

Lineage: Brother Lukas is of the 9th generation. He is the childe of Marusca, the Prince of Hermannstadt who is the childe of Zelios, the master mason. Zelios in turn is the childe of the ancient Nosferatu known as Hannibal, whose sire is lost, but he claims to be of the lineage of the Hag, also known as Baba Yaga. 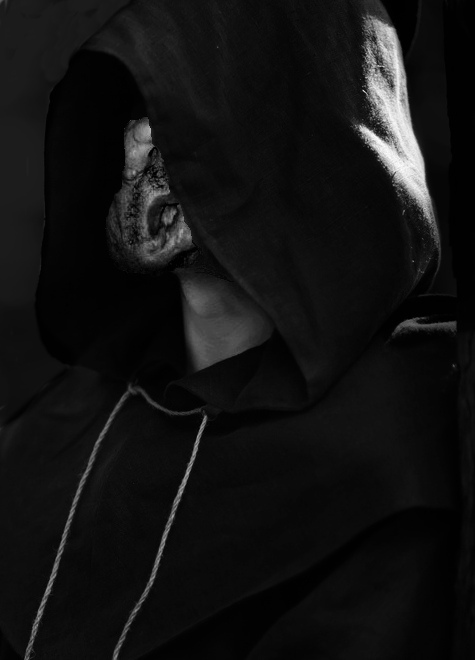