A Toreador ancilla and Sinner noted for her love of pleasure, passion for the hunt and thrill for the kill, Lady Mabile was the consort of Felix of Vaucluse. She was destroyed along with her love in April of 1204.

A slender, graceful creature who appeared a girl of perhaps twenty years of age but for the unnaturally pale hue of her skin and the predatory gleam in her eyes. Her beauty was fey, even inhuman, but undeniably compelling. She favoured a tailored fusion of Burgundian and Byzantine styles in white silk and red velvet, cut to show off her cleavage and decorated with embroidered roses and moline crosses. She veritably dripped with silver and sapphires. 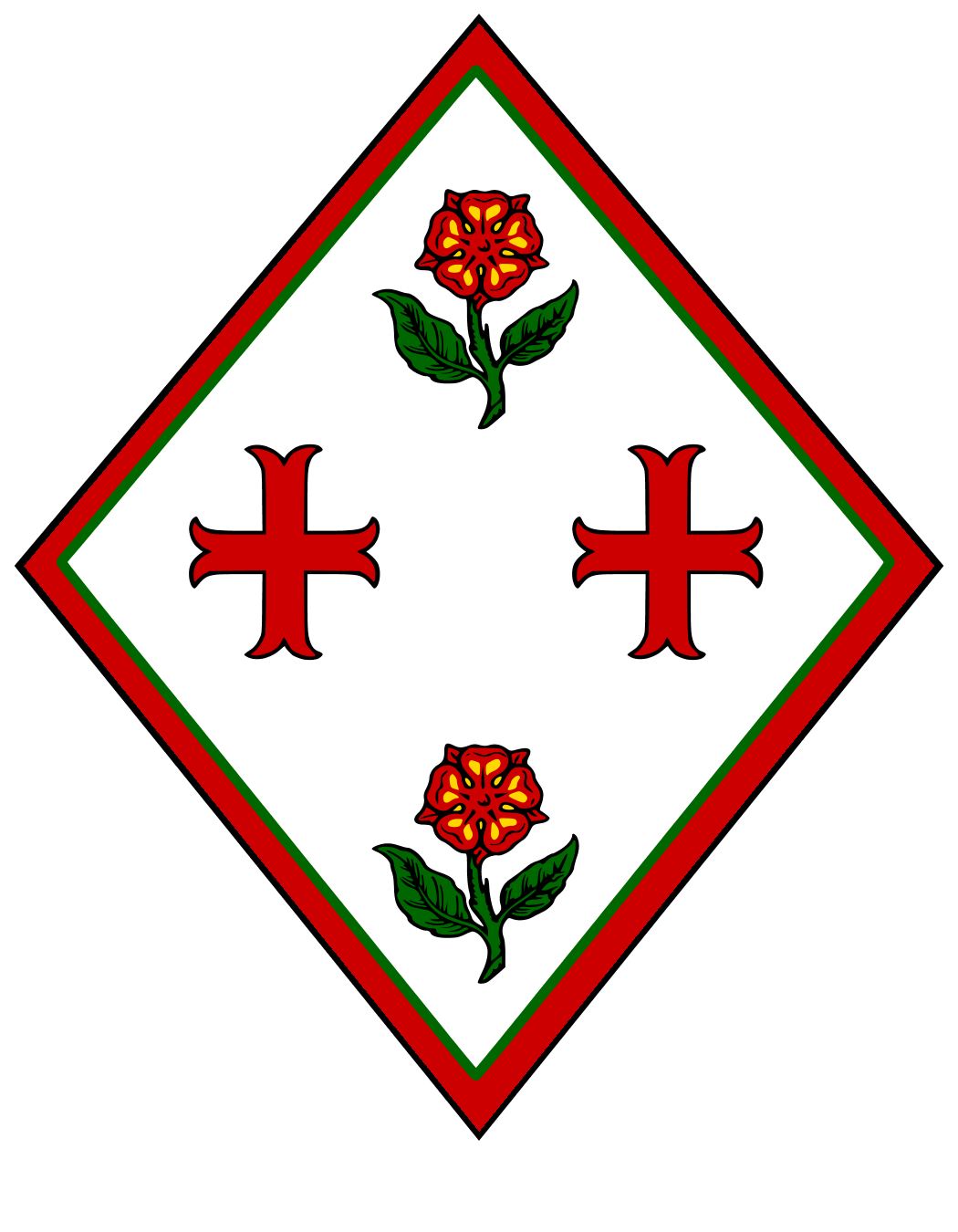 The coat of arms of Mabile, le Dame de Montceau.

Mabile, the Lady of Montceau ought to have been the perfect Artisan. Despite her weak generation she could recite her illustrious lineage all the way through Michael the Patriarch to Arikel, the legendary Toreador Antediluvian. She conducted herself through the pitfalls of high society with grace, was a talented intriguer, a gifted hunter, and a seductress nonpareil. In the finest traditions of the clan, she was also a profoundly skilled seamstress and master embroiderer, whose crafts could adorn the royalty of any land in the East or West.

And yet, she was despised by the Courts of Love, spurned by her bloodline, and resented by her own sire. For Mabile had openly embraced the via peccati, the Road of Sin, and flagrantly disregarded the rules of chivalry as foolish and useless mortal affectations. In the games of status played by the Clan of the Rose of the Courts of Love, this made her outcast. When she revealed her conversion in the spring of AD 1136, she was told to remove herself from Queen Hélène’s court in Troyes. No member of the bloodline would give her sustenance, haven, or succor and she would not be permitted to return on pain of Blood Hunt. Such a sentence of ostracism was akin to a death sentence for a Toreador, and the Lady of Montceau might have been expected to meet the dawn rather than endure it.

And yet, such is not the way of the Road of Sin. Mabile took her exile from high society in her stride. Moving from one court snub to the next, she eventually found her way to the Sinner mecca of Ancona, and ensconced herself in the studies of her path. Later, she joined those Cainites who accompanied the Normans on their incursion into Byzantine lands in 1185 and 1186. When the city of Thessalonica fell and was sacked, Mabile was among those who gloried in the bloodletting and danger. She settled in the conquered city, and while never a major player on account of her relatively weak blood, she made many contacts and enjoyed herself immensely. It is said that Mabile sampled nearly all the pleasures that the East had to offer, and her appetite was not even close to being sated. She gathered immense wealth through her seductions of merchants and noble pilgrims, and even managed to extend some tentative influence back to her native Burgundy. When she encountered Sir Herpin of Belfort in the summer of AD 1196, she finally thought she may have found someone who might reach out and take unlife with the verve and gusto that drove her. She seduced and Embraced the young knight, then slowly inducted him into the tenets of her road.

Lady Mabile and her fledgeling quickly attached themselves to Sir Felix of Vaucluse when Alexius IV Angelus’ Imperial Processional made its way to Thessalonica. She placed her wealth and contacts at his disposal, and made a show of “taking the cross” along with her childe. Entranced by the possibilities that his power might bring to her existence, she quickly seduced the Ventrue and became his consort. Mabile served as Felix’ advisor on all matters Byzantine, but her true value to her lover was entertainment. The spectacle of Mabile de Montceau on the Hunt was something that the Ventrue, and indeed most members of the Fourth Cainite Crusade (whether they were willing to admit it or not), found intolerably arousing. When she and Herpin hunted in tandem, other vampires were frequently driven mute in appreciation. The savage passions of Sir Felix were stoked almost to the point of frenzy by watching his partner seek out, toy with, seduce, and often cruelly slay difficult targets among the kine. Such passions appeared take hold of the powerful Ventrue, and the distraction to his intrigues was welcome to his enemies.

While Lady Mabile did not participate on the attack on the faux-treasure boat, she sent her beloved childe instead. Herpin had the misfortune of encountering members of the disguised Concord, and he was swiftly outclassed and staked by his enemies. It is known that upon hearing the news of his fall and disappearance, Mabile entered a terrible frenzy. She slew much of her herd, and several slaves of her lover’s as well, before she was forcibly restrained and calmed by Felix and Tancred. She swore vengeance on the “Turks” that did the deed, and bent her will to finding what happened to the treasure boat. She was joined in this fruitless investigation by the Tremere Hesintrada, who had lost her own ally, Sir Edgard of Esternay, in the disaster.

When the walls of Constantinople fell in April of 1204, the brutal sack of the city commenced and Mabile gloried in the rapine and destruction. In addition to feeding and slaying indiscriminately, looting holy places, and attacking Byzantine Cainites, she seized the opportunity to commit the crime of diablerie. Her victim was the Michaelite Megethia, daughter-in-blood of the elder Cyricus Justinan who, after being forced to witness the act, was in turn diablerised by Felix. Later that evening, when the Lexor senator Sir Conrad was subdued, Mabile appeared to take immense gratification in torturing the Brujah for information regarding the secret entrance to Michael’s lair. Distracted by the euphoria of diablerie and her enjoyment, she was unready for the thousands of seagulls, bats, and rats that descended upon the square.

Surprised and momentarily distracted, she turned at a commotion behind her and was immediately felled by a brutal over-hand strike by the ghoul, Francois. Cleaved from collar to sternum, she fell helpless to the flagstones of the square as the monstrous form of Veceslav Basarab, in zulo shape, closed in. The Tzimisce raked his claws upwards, from groin to belly, and tore the hapless Toreador in two.

A lucky escape into the Final Death, all in all, considering the end she deserved and the fate of her lover… 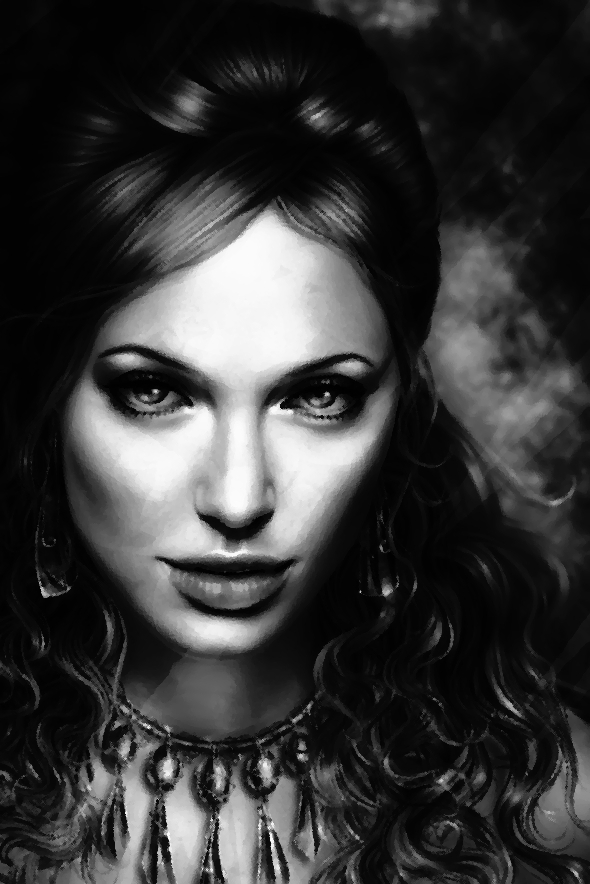