An elder Warrior of the failing Salubri clan, this hunter of the Baali and other infernal powers continues in his vocation, wandering the countries of the Mediterranean just a few steps in front of the Tremere who would hunt him.

A very large man with broad shoulders, a massive chest and rippling muscles. He is extremely pale, and his iron grey hair, beard and tired, sad eyes give him a washed out appearance. His face is heavily lined, but he looks to be in peak physical condition and he moves with swift and sure movements. He wears battered, much-mended mail under a plain black and brown surcoat, and his sword is an antique of the spatha variety.

This monstrously powerful elder of the failing Salubri clan is an unliving legend among the Warriors who hunt the Baali and other infernal powers. The Concord encountered he and his companions, Sir Simon of Ragusa and Argus, on the road to Timișoara in AD 1197. They had been tracking a demonic disturbance that had radiated from the small town of Vrsac, and their trail had led them to Sir Conrad. The Brujah had become the victim of diabolic possession, and he attacked the trio in a frenzy as soon as they appeared. In order to gain time for Argus to work his sorcery, Maluziel grappled the rabid Brujah and hurled him some 60 feet; a staggering deed of strength and supernal Potence. He then called upon his angelically inspired powers to cow the demon within the Cainite, bathing Sir Conrad in awful, glorious light from his third eye.

After Conrad was subdued, Maluziel expressed doubt that the demon could be exorcised, and suggested putting the Brujah out of his misery. Sir Simon demurred, arguing that a godly fellow such as Sir Conrad deserved to be saved, if it could be done. Argus agreed that his stricken clansman might be a future asset to their hunts, but that the skill to remove the demon was beyond him. His teacher, however, could do so, although it would take a journey of many months, and hundreds of leagues, to see the exorcism through. Despite his power and seniority, the Salubri humbly accepted that he was outvoted by his younger companions and he acquiesced to their judgement. In time, their decision would be vindicated, for the Brujah knight was a powerful ally in their later assault on a Baali stronghold in the Maghreb, and he remains a steadfast ally to their efforts in the remnants of the Byzantine Empire.

Sir Conrad was in awe of Maluziel’s abilities and reputation, and he would gladly relate the Salubri’s tale to other members of the Concord in the years to come.

Maluziel’s original name has been lost to history, but according to the tales, he was a Thracian soldier who was singled out for his piety and heroism at the Battle of the Frigidus, where he saved the life of the prominent general known as Timasius. The conflict at Frigidus was the death knell for paganism in the Roman Empire for ever after, the armies of Christianity would stamp out the old gods, or subsume them under an ever-widening array of saintly inveiglement. The man who would become Maluziel was a soldier all his life, fighting this enemy of the Eastern Empire or that, but unlike many who live a lifetime of war, his faith and compassion were undiminished when he was selected by the ancient Salubri Warrior known as Ezekiel. He was “Blooded by the Code”, a ritual devised by his grand-sire Samiel, which granted him powers above and beyond those typical to the Disciplines of Caine, and then put to work in the vocation that his defined his existence ever since.

He would spend centuries hunting the infernal, first with his sire, then on his own and finally with a circle of dedicated companions of the Brujah, Toreador and Assamite clans. He concentrated his efforts on the Eastern Empire and the Levant, but Maluziel would travel the length and breadth of the Mediterranean during the next five centuries. After a particularly harrowing experience in Araby in AD 941, where most of his coterie were slain in a pyrrhic victory against a Baali nest, Maluziel grew weary and disconsolate. Other, younger and more energetic Salubri, such as Qawiyya el-Ghaduba, were ready to take up his mantle, and Maluziel decided to take the Sleep of Ages. He entered legend, and disappeared for nearly 200 years.

Several decades after the destruction of Saulot, Maluziel reappeared in the Balkans. Initially bent upon bloody vengeance for the destruction of the First Golcondite, he destroyed several formative Tremere chantries before apparently undergoing a change of heart. Some say that it was the Brujah sorcerer Argus who convinced him to rededicate himself to his former vocation, while others think that Maluziel encountered another Salubri who convinced him to do so. The Warrior himself is terse and rather touchy on the subject.

Whatever the case, he and Argus have been companions since well before the turn of the 12th century, and the addition of Sir Simon of Ragusa to their coterie has also brought alliance with the wealthy and influential Order of Chanticleer, in turn allowing Maluziel to occasionally appear publicly in Cainite courts. This makes him a highly visible reminder to the High Clans that the Salubri aren’t quite dead yet despite the casual betrayals and disloyalty of their former peers. Maluziel, while certainly not the lightning rod for clan unity that the Warlocks fear, has been active in trying to keep his brothers and sisters from the fangs of the their enemies. This was evidenced by the “safe words” he offered Knez Veceslav when it became clear that the Tzimisce was well disposed towards seeing the Salubri safely through Transylvania, a land thick with danger for the Unicorns. It would appear that despite his willingness to appear openly, Maluziel is no stranger to subterfuge. Iulia has expressed the opinion that he may in fact make his public appearances merely to concentrate Tremere scrutiny upon himself, thus allowing his less able fellows to slip through the Usurper nets…

By nature Maluziel is tacit, even terse, even with his own companions; he has a deep and abiding pragmatic streak and is easily moved to anger. However, those who spend any length of time around the ancient Warrior quickly discern his great capacity for empathy, generosity and compassion. He is merely scarred by his experiences, and slow to invest trust in others. Like many of his broken clan, he is bitter at how readily the other clans turned upon the Salubri once the Tremere gave them cause, especially in light of the obvious transparency of that given pretext. There is a weary air to him, but unlike some of the Salubri that the Concord has encountered Maluziel is not resigned to the doom of the clan. He is still prepared to fight, and slay, the Warlocks if they cross his path. What he will not do is betray the lessons of neither Saulot nor Samiel, for ultimately the Tremere are merely unworthy of the Blood that they have stolen. The Baali, and the unspeakable things they serve, are the true enemy. If no one fights them, everyone loses. To ignore that reality would be to truly fall, and Maluziel is a Warrior of the Salubri, Blooded according to the Code of Samiel, and he will live, and if necessary die, worthy of that mantle.

That is Maluziel’s true danger to the Tremere, and that why they hunt him so ardently. He is no leader, but his brave and very public example proves that not all Salubri will go quietly, nor meekly, into the night…

Embrace: The early years of the 5th century, perhaps a score of years after the Battle of Frigidus. 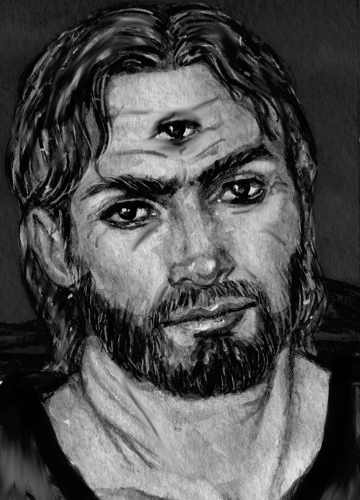