This Venetian was a merchant of the Narsene Lasombra. As overseer of the quarter ports, he was a pillar of Bishop Alfonzo's power in the Latin Quarter. He is believed to have been destroyed during the Great Sack of 1204.

Marko appeared to be a young man dressed in the silk finery of a Venetian merchant lord. His brown hair was short and meticulously groomed, and his blue eyes were calculating and intelligent. Unlike Gregorio, Marko did not come across as a bully, and actually proved to be friendly to most of the people he met. He was usually armed with a spathion and a dagger, both of very fine make.

Marko was the eldest of Bishop Alfonzo’s progeny in the Latin Quarter, and was long a quiet stalwart of Narsene Lasombra power in the city. While his sire was responsible for out-manouvering and out-witting the Antonian Ventrue on the political scene, it is Marko that succeeded in stopping Doux Chrysopolis Maris Argyros from working his way back into the ports in the wake of the Eighth Council of AD 1185. Even so, Alfonzo favoured the wastrels Juliano and Adrianna over Marko, whom the bishop was once heard to deride as being “funless, and as dry as the deserts of Egypt”. Then as now, his sire preferred the company of those who could share in his sanguine appetites with equal gusto over the simple demonstration of competency.

The murders of Juliano and Adrianna afforded Marko and his brother-in-blood Gregorio the chance to once again enter the favour of their sire. This they did in dramatic fashion, stepping up their roles above and beyond their traditional duties and raising their profiles as Bishop Alfonzo’s chief lieutenants in the Latin Quarter. For Gregorio, this took the shape of throwing his weight around with increasing vigour and frequency and, while Marko often backed up his sibling in this regard, his own methodology was far more subtle. Indeed, he would often hang back after Gregorio bullied a Cainite of the Latin Quarter, then quietly approach the offended party with an offer to intercede with his brother or sire in future to prevent “future misunderstandings.”

Working with his own Family and also his fellow Venetian, Markus Musa Giovanni of Clan Cappadocian, his methods allowed Marko to enrich himself quickly. Giving him access to markets and information on many strata of society, it also allowed him to continue to enrich the Latins at the expense of the Greeks. This made him a hated figure throughout the rest of the city, and by the turn of the 13th century he travelled between the ports with a large, well-armed escort just in case resentment should boil over into violence.

Marko d’Este was present at the Narsene blood feast in honour of the formative Concord, and he showed himself to be one of the more reserved of his siblings. However, any illusion that he was more humane or honourable than the rest of the Narsene Lasombra was shattered when he readily took part in the hunt on the human prisoners. Over the years afterwards, Marko was bound up as a partner of Markus Musa Giovanni in the Siebenburgen-Constantinople trade route enterprise with the Gangrel Gunthar von Wolfgang.

During the events of the Great Sack of 1204, Marko and Gregorio disappeared, and their ash-soiled clothes were later found among scores of other destroyed vampires in the secret gladiator pens of the Families, close by the Hippodrome. Rumour has it that Bishop Alfonzo sent them to perform a mass Embrace on the veteran slave warriors of the pits, in hopes of using their martial skill in tandem with their hatred of their masters among the Antonian, Michaelite, Magnus Orthodox, and Draconian Obertus Families. No one has ever officially claimed credit for the destruction of the two Narsene ancillae and all those fledgelings, but gossip eventually made its way around the Elysiums of the city that the elder Malachite slew Gregorio and Marko. Their loss served to delay the power play of their sire by several years, but Alfonzo would eventually claim the princedom of the Queen of Cities in 1207.

Although it is almost certain that Marko met the Final Death that night, a further rumour holds that he was still more or less intact when his body was removed from the hippodrome slave pits. A witness, Lotario Acuto, has said from time to time that he saw that Marko’s head was viciously cleaved, and he was obviously in torpor, but he clung on to his unlife precariously at that time. That Toreador has become noted for his willingness to spread disinformation in recent years, given the right price, so he may be lying. If not, however, this clever Lasombra might yet return to play a part in the future of the Queen of Cities. 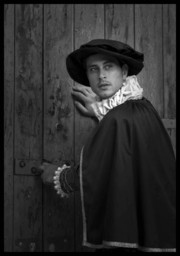