A monstrous, savage walker on the Road of the Beast, who nonetheless maintains a stringent code of honour based on protecting the Brood and future of Hermannstadt. He is an ally of the Concord and, by extension, the Ashen Band.

A tall, wiry monster stands here. His glowing red eyes stare with angry, murderous intent, his mouth is a crowded maw of long, sharp misshapen fangs and his pointed ears tend to twitch as he moves. The thing appears to care little for clothing, being naked to the waist and wearing only a ragged pair of leather trousers. A horrid mess of scars thatch the grey skin of his torso, arms and dreadful countenance.

Known as Prince Marusca’s Scourge and Warmaster, this ferocious Vlach Nosferatu has long warded the domain of the Brood against all who would threaten it. He is the oldest (surviving) of her progeny, and although he is laconic in the extreme, he has told Sága that he was a hunter and trapper, brought across to be Marusca’s strong right arm when the site of Hermannstadt was still nothing more than a lonely Magyar castle guarding and taxing the waterway of the Olt.

He adopted the Road of the Beast speedily after he was brought across, and in the following years he has often served as mentor to others among the Brood, as they have each sought to reach an accommodation with their own Beasts. Nicu’s views on the road are dissimilar from that which is taught by many Cainite luminaries of the via bestiae in the East, and indeed some of those values he espouses might be mistaken by the uninformed for tenets more familiar to the via humanitatis or even the via regalis. Most notably, he keeps his word assiduously, although he is hesitant to give it in the first place. Secondly, Nicu firmly believes in the future of the mortals of Hermannstadt, and works to ensure their prosperity, even as he mercilessly culls the sick, the weak, the very old and others that he sees as undesireable from the herd. Nicu is known to look down upon those of the Brood who do not abandon their humanitas and accept the truth of their undead condition, but he grudgingly acknowledges that his childe, Adelard, and his grandchilde, David, are both capable of moving through Hermannstadter society with enviable ease, watching over it in ways that he cannot.

Nicu was not strictly encountered by the Concord on their initial visit to Hermannstadt many years ago, although a number of those more sensitive to the unseen had a prickly sense that someone was watching them unannounced while they traversed the outer boundaries of Marusca’s domain. His reputation would reach them later, however, for those among the formative Concord who paid attention to such things knew that Marelle’s warmaster, Dumitru, had fallen to the strongest of the Nosferatu warriors of Hermannstadt in AD1199. This warrior, named Nicu, also served as Scourge of the city; as such he was responsible for warding the boundaries of the margraviate. Who else would have provided that menacing presence in 1197 but he?

In any case, Prince Iulia and her servant, Marius de Şimand (whose duties often took him through the margraviate), would hear many rumours of Nicu’s potency and savagery over the coming years, as the war between the Brood and the Hell Hounds heated up throughout the first decade of the 13th century. During the course of the conflict, the warmaster was given carte blanche to Embrace or recruit servants of his own, and they proved the most effective foils to the brutality of the Hell Hounds themselves. In fact, in one fateful encounter in AD 1209, Nicu had the Sculptor of Wolves herself under his claws for a moment, but he came to grief and was savaged by her bodyguards. He sustained horrific head injuries in addition to losing his arm in their ferocious assault, and remembers nothing of what happened, save being rescued by his own progeny, Arna, before slipping into torpor. Without Nicu’s leadership, experience and cunning, Arna and the rest of his pack were picked off and destroyed within months of his own fall.

Nicu lay in torpor for nearly 5 years, before Marusca convinced the Cappadocian Sister Maude Khlesl to use her death magics to bring the warmaster out of torpor. Having heard of his savage reputation, Maude worried over doing so, but the prince of Hermannstadt claimed that Nicu’s brutality would be put to good ends. Her decision was also affected by a desire to hedge the bets of the Concord and the Brood in their coming assault on the Black Cave. Throughout the course of her ritual, her mind briefly touched his, and she discovered his psyche to be a confused fog, even more so than those of other torpid Cainites that she had encountered in the past.

During the Battle of the Black Cave, the Nosferatu warmaster was a force to be reckoned with, even though his arm had not yet properly regenerated. In a furious exchange from both parties, he triumphed over the powerful Tzimisce Flavia, packmaster of the Hell Hounds of the Cleft Peak, and he also saved his consanguineous sister, Oana, from the monstrously powerful ghoul known as Cerberous. Badly wounded himself, Nicu managed to damage that hell hound grievously, tearing at its underbelly to distract it while Veceslav Basarab took advantage to deliver a final coup de grace to the tortured beast.

In the wake of the battle, an alliance of convenience was declared between Marusca and Jürgen von Verden. The Ventrue lord would endorse the Nosferatu prince, effectively putting the final nail in the coffin of Lady Nova’s Blood Hunt. In return, Marusca would put a number of her skilled brood at the disposal of Lord Jürgen’s spymaster, Akuji, who had been less than successful at recruiting local talent. Together with Fritzi, Nicu made his way to Kronstadt to fulfill his mistress’ pact, and he soon went further, arriving in Etteldorf to offer his services as a master of scouts and trainer of disciplines to the Ashen Band. After all, every favour he does them diminishes the favours that the Brood of Hermannstadt owes to their masters in the Concord. Sága in particular benefitted from his aggressive and energetic style of training, particularly in the early phases of Lord Jürgen’s campaign against the Cumans. Nicu and Sága would concentrate on external camp security and scouting, while Fritzi contended with the challenges of internal camp security.

During their scouting and training sessions, the warmaster proved to be short on conversation, avoiding most of Sága’s curious probes into his story. His few words were directed towards pointing out ways she could become more effective at moving both quickly and unseen in the wilderness, and also how she might use her Animalism abilities more deftly. She did manage to get out of him that he volunteered to represent Marusca in her pact with Lord Jürgen because he feels restless and has “no temperament for peace.” She also gleaned that Nicu is very close to the Beast, and not altogether in ways that would seem healthy, even for a Savage. Perhaps his many years of fighting have eroded something of his mind, or just maybe his peculiar code is incompatible with the via bestiae after all. Whatever the case, Nicu’s Beast rises quickly, and with little provocation, and it often takes much of an evening for it to settle down again. He is not a Cainite to be trifled with.

After the Ashen Band was dismissed from the army of the Burzenland, both Nicu and Fritzi elected to remain with the campaign. When they departed, the brusque warmaster wished Sága a rather terse, but not cold, farewell and stoically continued with his duties, vanishing into the southern hills to scout out the spoor of the Cumans.

He and Fritzi continued their duties throughout the remainder of the Cuman War, glorying in the death and misery that they caused among the followers of Kordönül, and using the gifts of their Nosferatu Blood to counter the Animalism advantages possessed by the Gangrel. After the war was successfully concluded the two Nosferatu would continue to represent their prince to the Ventrue. They travel together, ranging between Kronstadt and Hermannstadt, and also among the Cumanian settlements that fall under the dominion of the Teutonic Order. Masterful scouts, they have become quite skilled in the use of their Animalism and Obfuscate disciplines to reconnoiter the region and report their findings back to Akuji, Marusca, Karsten von Hornburg, and Lord Jürgen.

Lineage: Childe of Marusca, Childe of Zelios, Childe of Hannibal; of the lineage of the Hag, also known as Baba Yaga. As Marusca is known to claim the 8th generation, Nicu must be of the 9th. 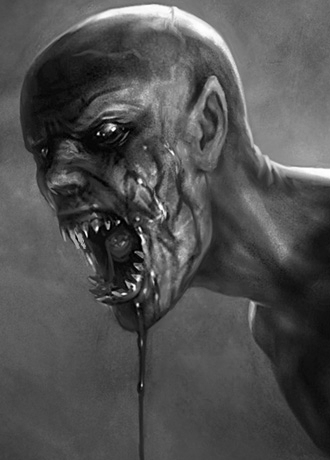