Childe to Svenin the Tall, and grandchilde to Bernhard the Red Wolf, this warrior is captain of the famed Black Lion mercenary company. He and his men conduct their trade in the neighbourhood of the Byzantine East and Outremer.

A tall, fierce looking Northman with long, blonde hair showing the first signs of recession and a full beard, speckled with grey. He wears a battle and travel-stained gambeson and keeps a light helmet on hand for protection. A Norman kite shield is slung at his back. The Northerner is armed with a longbow, a hand axe and two long knives. A quiver of arrows hangs from his belt. The device of a black lion regardant on a field of yellow is sewn in a prominent place on his cloak.

Background: Odda was a ghoul in Svenin’s mercenary band, The Black Lions, for forty years. Before then, he was a mercenary for more than 20, having followed the Whale Road to the southern lands when he barely a man to seek his fortune by the sword. Svenin was a good friend, a sword-brother, as well as an afterganger. When Odda was offered the Embrace, and with the Black Lions, he took both readily. He took to the Blood quickly, and took to leadership of the Lions even quicker. His common sense approach to soldiering, backed by decades of experience, has given him a reputation for solid leadership that other sell-swords have flocked to during their campaigns on the fringes of the failing Byzantine Empire. After much persuasion by his sire, Odda took the Black Lions north into the conflict with the Cumans. Odda and the Lions fought well, growing their reputation and preserving their numbers under the banners of the Teutons. It was all a part of some plot by Svenin, a plot which involved Odda being pitted against the Cuman warlord, Kordunal. Thankfully for Odda, the plot – and the war – seemed to dissolve with the apparent assassination of the Cuman warlord. Odda thankfully took his mercenary band south again to safer wars. When Kind Andrew called his banners for the Crusade, the Black Lions found employ with a Hungarian lord called Ladilaus of the House Kan, the son and heir of the famed Julius Kan. The young lord if the ‘Master of the Horse’ for King Andrew’s forces. Odda has not had much to do with his pay-master during the Crusade, owing to the slow pace of the Hungarian leadership. But on his own Odda has won some renown by his willingness to sacrifice himself for the older Gangrel, Elek a knight of Kara Lepescu’s influence. He won the archery contest at Prince Etienne’s tourney and then assisted in the purging of the Tower of Flies, even fending off the Baali ancient’s desperate attacks alone until the Ashen band could destroy the beast.

Role-playing Hints: You are a pragmatic soldier, with a simple view of the world. You fight for pay and glory; the fruits of that are acclaim, pleasure and comfort. Little else motivates you – no god, no king and no ideal other than this – the man next to you in the line of battle is your brother and the one facing off against you is your enemy. Enemies are killed. Svenin has taught you this code, and it has always served you well. However, you do have a rough sense of fair play, and you can be motivated by kindness towards others when you see fighting spirit or true character in them.
Persuaded by the rhetoric of the warlord Kordunal (or least parts of it) and the similar rhetoric of Armis the Hedge-Knight ally of the Concord of Ashes, you have become apolitically loyal to the Gangrel as a clan entity. You will seek to render assistance and hesitate to fight against any Gangrel you encounter.

Haven: The camp of the Black Lions.

Secrets: For decades, Odda was the captain of the Lions at the behest of his sword-brother, Svenin an afterganger. After the abortive attempt to regain Sofia for the sire of Svenin’s ally, Veceslav, Svenin Embraced Odda. For almost a decade, the two fought side by side as aftergangers and Svenin taught Odda what it meant to be a Gangrel and how to survive as one. Then Svenin took off to work alongside his allies, the Concord of Ashes on some kind of complex plot involving Svenin’s fallen sire. Odda was left in sole charge of the Black Lions, tasked only to ensure they grew strong. He has succeeded in his mission, growing the Black Lions into a company of some 200 highly trained and experience warriors. Odda has come to enjoy his independence; with his sire is off pirating, Odda is able to run the Lions as he sees fit.
Odda and Stiguld have spoken at length about the Embrace, and whether Stiguld would want it, it’s implications and so on. The two are sword-brothers and friends.

Influence: Odda is known to be a skilled mercenary captain, and that reputation sometimes precedes him when he is dealing with other soldiers active in the Levant and Byzantine empire. He won the archery competition held during the tournament at Acre on the last night of Prince Etienne’s Court at the Three Kings. 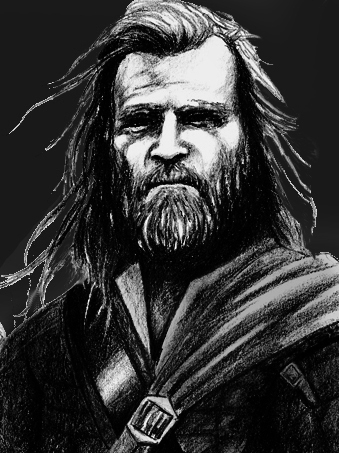