This elder of the hunted Salubri clan is a mysterious and compelling Cainite, who had potent friends among the Trinity families. Rescued from the Tremere by the Concord, he took shelter with the Obertus Tzimisce until he vanished during the Great Sack.

A hearty, dignified man in his middle years who seems a little pale despite his weathered features. He wears the simple robes of a mendicant or a pilgrim, a picture reinforced by the sturdy walking staff that he habitually carries. His gentle brown eyes tend to fascinate, and an air of serenity and gravity surrounds him. A thin scar runs across the middle of his forehead.

Myths and legends tell of a remarkable young lyrist of the Argo. The son of King Oeagrus of Thrace and the Muse, Calliope, this young man was said to have been a sorcerer, a physician, and a poet in addition to his prodigious musical abilities. Some say that the young musician possessed such skill that he could make the stones and trees move of their own accord and bring the fiercest of beasts calmly to heel. The tales of the epic voyage say that he also saved his fellow Argonauts by playing so loudly and beautifully that he drowned the bewitching song of the Sirens. When his wife Eurydice later died, so mournfully and profoundly did he play that the gods themselves wept and shared in his grief. Both Hades and Persephone granted him the chance to journey through the Underworld and bring Eurydice back; the only mortal to ever have been so honoured. This lyrist was called Orpheus.

The legend of Orpheus has grown with the centuries. To the ancient Greeks, he was a paragon credited with gifting men with the arts of medicine, writing and agriculture. He was thought to be a great astrologer and seer, the founder of great cults of Dionysus and Apollo, and the author of the mysteries that bear his name. The Orphic Mysteries were practiced for many centuries before the pagan ways were displaced by Christianity. Rumour has it that secret cults still practice them in the lonely places of Greece, Macedonia, Thrace and the islands of the Aegean.

And yet, the question remains: did Orpheus ever actually exist? Or is he merely allegory obfuscated by myth and inveigled by time? Mortal men will likely never know.

The Children of Caine know better.

Orpheus of the Clan Salubri has been active since well before the birth of Christ. He has always been rather coy concerning his mortal origins, appearing to enjoy the mystique that comes along with his legend. To be sure he has demonstrated supernal skill with the lyre, and his talents with poetry and especially healing are extraordinary — even for one of his ilk. He is even reputed to have certain tricks of sorcery up his sleeve. In contrast to his murky mortal origins, his lineage and activities throughout the long centuries are rather more well known. He is known to be just three generations removed from great Saulot himself and he claims descent from the legendary Rayzeel.

In the waning years of classical antiquity, Orpheus was known to wander widely throughout the near East, preferring the warm, temperate climes common to the shores of the Aegean, the north-eastern Mediterranean and the southern reaches of the Black Sea. He was particularly fond of Athens, Byzantium, Ephesus, and Trapezus, and those few elders of that vintage who remain can attest to the gentle nature and generosity of their guest. In addition to his grandsire Rayzeel and his sire Zafar (who was reputed to have been present at the creation of the Pact of Athens), he was a noted disciple of Mokur and, briefly, Saulot himself. Indeed, the search for Golconda was central to his wanderings in both a metaphysical and metaphorical sense. Throughout the course of his long journeys, Orpheus grew to number many Cainite luminaries, including Dionysius of Athens, Kyrios of Antioch, Petronius the Arbiter and the Dracon among his friends, colleagues and correspondents. Alas, he grew weary of the world with the march of Christianity and the subsequent dissolution of the old ways and he succumbed to torpor during the reign of the Emperor Marcian.

Orpheus resurfaced once more in the early 9th century, this time in the ancient city of Tarsus. He took the mystic Achmet for his disciple and childe, and the two settled in Constantinople for the best part of a century. There Orpheus set about teaching the tenets of Golconda with renewed vigour whilst pursuing the Unmapped Road within himself rather than seeking experience in his wanderings. They did their best to stay aloof from the politics of the Trinity Families, and were for the most part successful in staying neutral and maintaining their welcome. However, the pagan and the Muslim were always strange and uncomfortable in the palaces of the Dream, and they paradoxically found the stringent Christian discipline of the Draconian monks of St. John Studius far more amenable company than diversionary comforts and wit of the Michaelites or the cut-throat politicking of the Antonians, and certainly the self-serving faux-spirituality of the followers of Magnus. Eventually, friendships began to fray and the two Salubri resumed their wandering in the first years of the 10th century.

Eventually, Achmet conceived of his own notions of how one might reach Golconda and he parted ways amicably with his sire. Now considered venerable indeed, Orpheus quietly set up a new residence in the city of Sinope, on the shores of the Black Sea. There he attracted students and received colleagues and clanmates for the next 150 years. Like the rest of brothers and sisters, the diablerie of Saulot at the hands of the upstart Tremere shattered Orpheus’ world, but he laboured on as best he could, for he knew that the First Golcondite would wish it so. He continued such until the turn of the 13th century, his contacts and favours gradually dwindling along with the protection offered by the Malkavian Prince, Razmik.

Orpheus’ luck finally ran out in September of 1203. A team of Tremere hunters, somehow shielded from his prodigious command of Auspex, staked the elder Salubri while he strolled the waterfront of the port. Instead of taking his soul or leaving him for the sun, they instead took Orpheus to Constantinople as part of a plot to lure out Achmet the Dreamer and his disciple, Theresa Kymena.

Tipped off by a mysterious Nosferatu boy, the Concord happened upon the arrival of the ship at the Harbour of Neorion. They then witnessed the Tremere Abetorius Maior and Vasileous order their minions to set fire to the ship. Even paralyzed by the stake through his heart, Orpheus was able to reach out to the minds of the Concord and beg them for their help. At great personal peril they managed to rescue the elder, thus likely incurring the enmity of the Tremere. With the aid of George Davras and Gabor the Bulgar, the Concord managed to transport Orpheus to safety at the Monastery of St. John Studius. Grateful for their aid, the old Salubri recognised the Life Boon owed to the coterie in return. Safe for the present, he elected to remain under the protection of Gesu and the Obertus family, seemingly content to plan his escape into obscurity very carefully indeed. In the meantime, he set about renewing ties to his childe, Achmet, and establishing new ones to his followers in the Dream Circle.

Orpheus is a master of Auspex, having demonstrated a capacity to communicate telepathically with many people at once . He has also proven an ability to readily pierce the Shroud separating the land of the living with that of the dead, and hinted that he can see even further into the Underworld if he must. In addition, he has mastered the Healing discipline of Valeran, claiming that through his music he can dispel the worst melancholy and speed the healing times of others manifold. He also possessed enough Fortitude to survive the heat of an inferno for several minutes, although he would have surely perished if the flames tasted his skin.

In the weeks immediately prior to the fall of Constantinople in April of 1204, Orpheus and the Salubri Hospitaller Guilabert d’Avignon finally convinced Achmet the Dreamer that he must leave the monastery before disaster struck. Quite possibly, Orpheus had a fateful vision, for he grew strangely agitated the night before the walls were breached. All 3 Salubri plus the Tremere Theresa Kymena vanished during the Great Sack. Their allies among the Concord hope that they all reached safety in obscurity somewhere, but it is just as likely that they perished in the chaos of the destruction of the monastery, or perhaps the rampant violence that descended upon the Queen of Cities.

Embrace: Unknown, for Orpheus was always coy concerning the time of his Becoming. It is known that he was active throughout the Mediterranean by the late years of the 3rd century BC. 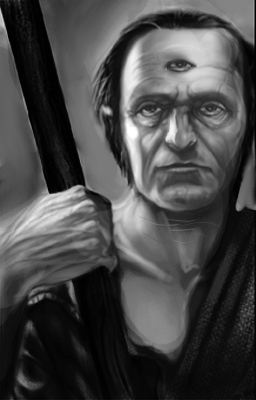