A dangerous, savage Hell Hound of Clan Brujah, almost entirely given over to the carnal, bloody whims of his Beast. He ran from the Battle of the Black Cave, but likely did not survive the night as he fled into a werewolf pack.

A large, muscular, fierce brute clad in the remnants of a mail hauberk, reinforced with fur, hide and straps to offer continued protection. His thick black hair and full beard were hopelessly tangled, and his cobalt eyes seemed perpetually clouded with rage. Unusual for a Cainite, he preferred the morningstar as his weapon of choice, and was armed only with a belt knife besides.

A member of the Cloven Peak pack, Ovidiu stood out as an intimidating presence when Svenin the Tall, Brother Berengar, Sir Ulrich and Marius de Şimand visited the Black Cave for the first time. Easily a head taller than the other Hell Hounds except for Corneliu, he was difficult to miss, especially as his air of simmering rage was obviously directed towards the two Ventrue visitors. The only time he left off glaring at them was when he watched the wrestling match between Svenin and Corneliu with great interest and an educated eye.

The Viking would later learn that Ovidiu was the most recent addition to the Hell Hound ranks, and had also not long walked away from the via humanitatis and stepped onto the via bestiae. As such, his Beast was very close to the surface indeed, and the Brujah almost seemed to want to lose himself in bloodlust and depravity. It was almost as if he had turned his back on the man he once was with the fervour of the fanatic. It was obvious to Svenin, once he had heard Ovidiu’s tale, that his road into depravity was long, arduous, and bloody. Indeed, he had spent the best part of 15 years as a desperate, constantly hunted fugitive of the Árpád Ventrue, having earned their enmity with his prominent role in the entourage of Dominic the Carthaginian.

During the final years of the Brujah supremacy in Timiș, the neonate Ovidiu was singled out by the ancient warlord for his talent and passion. When Dominic vanished in 1198, the Árpád vengeance was swift and implacable against those who had done them injury, and especially towards those who may have been seen as an heir to the Cathaginian’s legacy. Evidently, the bloody, expedient lengths that Ovidiu must have gone to in order to outrun the Ventrue hunt , the despicable acts he must have performed, almost led him into the dreaded Wassail. All he had left was hunger. And rage. Then he found the Hell Hounds. Impressed with his combat prowess, they showed him how to accept his Beast as ally rather than captive, and to revel in his carnal nature. The Brujah accepted the lifeline and never looked back.

During the Battle of the Black Cave, Ovidiu all but ignored the Brood of Hermannstadt, seeking out the Ventrue he had earlier seen in company with Svenin. He sought in vain, but guessed that an imperious monk standing towards the rear of the fight was almost certainly a member of the hated Clan of Kings. Ovidiu charged through the fray with frightening alacrity, holding his wicked morningstar high to pulverise the skull of Brother Adalbert. The monk understood that doom was upon him and, knowing he could not run, the Ventrue wisely stood his ground, making use of his Dread Gaze in hopes that he could send the Brujah packing before he could close the full distance.

The gamble paid off. Adalbert’s Presence overcame the brittle courage of the enraged Zealot, and Ovidiu fled instead. Unfortunately for the Brujah, his unthinking Fox Frenzy carried him almost directly into the path of the pack of the Umbra Domnii werewolves that were also closing in on the fight. Judging by the triumphant, blood-curdling howls that announced their presence to the Cainites, it is quite unlikely that Ovidiu made it to safety. 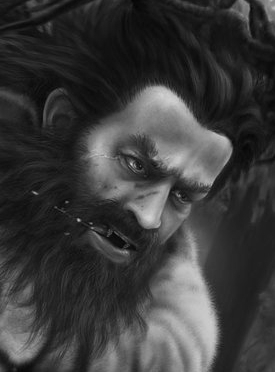