Once the Michaelite Muse of Painting, this elder's skill is many centuries beyond his time, but his genius is marred by madness. He is a leader in the renewed Cult of the Archangel.

An athletic, pale Grecian with short, curly black hair and a finely sculpted beard and moustache. Once known for wearing the latest styles of the Byzantine court, with an apparent fondness for shirts that expose as much of his chest as decently possible, he now wears the simple robes of the penitent. He has large, soulful hazel eyes, and is handsome in a rather effete sort of way.

Pakourianis was chosen by Michael for obvious reasons, for his genius was well beyond the 6th century, just as it is well beyond the 13th. Alas, like many of his brothers and sisters in the Michaelites Pakourianis has not been entirely lucid for a couple of centuries now. He is obsessed with all things avian, for he wished to learn how to fly in case his beloved sire and archangel should take flight for Heaven and leave him alone to languish in benighted misery. Pakourianis came to be called “the Dove” by the court wits for his pathetic fixation and also his child-like naïvety, but he didn’t even realise the joke that was being had at his expense and he accepted the moniker as a compliment. In the past he commissioned dozens of Gregory the Wondermaker’s mechanical birds, and had hundreds of real birds in a massive aviary in his slightly decrepit palatial home, not far from the Church of Hagios Demetrios. Then as now, when his frustrations grew too much to bear, he has been known to run howling for the point, where he throws himself into the sea in a great cathartic leap from the walls near the Gate of St. Barbara.

In AD 1196, Pakourianis attended the Antonian Blood Feast in the honour of the formative Concord. There he spent much of the time haphazardly socialising and disconsolately staring off into space, his eyes occasionally brimming with bloody tears. The coterie seems to have thought better of interrupting his personal melodrama, and Pakourianis wandered off to cry himself to sleep after the midpoint of the evening, when the fun was just starting to begin.

Throughout the years to come, he would have little to do with Petronius’ late attempts to reform the Michaelites, save to raise his objections when the Arbiter stripped Paul Bathalos of his portfolio of sculpture and awarded his station to the newcomer Eletria. By March of 1203, he knew that Petronius was actively seeking to remove him from his own place as Muse of Painting in favour of the far less talented but far more motivated Stephen Cerularius, but Pakourianis managed to hold them off with the crisis of the arrival of the Fourth Crusade.

Soon enough, the stations of all the muses became a moot point, for in April of 1204, the city fell to the covetous and desperate Franks. Pakourianis the Dove disappeared during the Great Sack, and his dilapidated palace was found looted, vandalised, and partly burnt after the dust settled. It was assumed that he had met the Final Death at the hands of a French or Italian Cainite hungry for his soul, and he was mourned along with many others who did not survive that awful time.

The Cainites of the broken families were surprised then, when in September of 1217 Pakourianis walked into the Elysium at the Chrysotriklinos of the Great Palace at the elbow his consanguineous brother, Paul Bathalos. Many of the Cainites there, who had never regained fortune or favour in the many years since the fall of the city, rejoiced to see the Dove once more for he reminded them of the golden nights of yore. He asked for the floor, then spoke with great conviction of his lengthy torpor, through which he was gifted with visions of Michael the Archangel, who now stood in his rightful place beside Gabriel at the left hand of the throne of the Almighty. These dreams were similar to those of which Bathalos had related after his own return to consciousness years earlier, and together they exhorted those present to join them in prayer, so that their martyred Patriarch would hear their entreaties and send a prophet to guide them to Heavenly redemption.

Pakourianis has joined Bathalos in leading the Cult of the Archangel. Mortals and vampires who once worshipped the divinity of Michael slink out of the shadows once more, making their way to the ruined Church of Hagios Demetrius to join them. The former Michaelite Muses of Painting and Sculpture style themselves as Nephilim after the biblical legend of the sons of Fallen Angels, and they seek to baptise others into their renewed faith.

Lineage: Childe of Michael the Archangel (d), Childe of Arikel. Pakourianis is of the 5th generation. 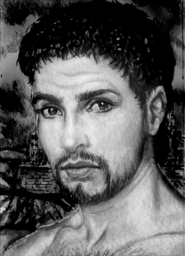