This Roman elder was the Michaelite Quaesitor, Muse of the Minor Arts, and Arbiter in the final years of the old order. He attempted to reform the Michaelites before the end, but the Great Sack undid his works. His whereabouts are unknown.

An elegant, dignified man in early middle-age with short, dark hair greying at the temples and intelligent brown eyes. He is so pale that unless he moved, he might be mistaken for a marble statue. His white robes are of the Byzantine court, and he wears no adornment other than a golden ring set with a large ruby. He is unarmed.

(Expanded from the character as presented in Constantinople by Night, p. 104-105 and the wikipedia article here).

A Roman courtier in the age of Emperor Nero, Petronius gained considerable fame for his renowned wit as well as for his extraordinary taste, elegance, luxurious lifestyle, and shameless pursuit of hedonism. His authorship of the Satyricon gained him the attention and praise of Nero himself, who gave Petronius the name Arbiter in honour of his accomplishment. The Satyricon included the “Dinner of Trimalchio”, in which tales of a vampire and werewolf were included. The story entertained the Toreador of Rome immensely, and it also earned Petronius the attention and later patronage of Michael himself. When his wit led Petronius into an abrupt fall from grace and a brutal date with the Emperor’s executioner, he instead elected suicide as the only dignified and stylish exit left to him. Michael intervened and gave him a third choice: forever.

The Becoming and his entry into the community of immortals changed Petronius immensely. From that point he existed to love and honour Michael and the Dream, which was then in its formative imaginings. He gladly left with the Triumverate when Michael, Antonius and the Dracon turned their backs upon the failure of Rome, and did his best as Muse of the Minor Arts to build something grand and eternal. He is the longest serving member of the Quaesitor Tribunal, and worked well with the late Septima Dominica of the Antonians and Symeon of the Obertus to keep order in the city. For more than five hundred years, despite adversity, infighting and the treacherous nature of the Children of Caine, the Dream prospered.

And then, it all started to fall apart…

Antonius was destoyed, with the regretful consent of his lovers. The Dracon departed the city within a century, ashamed of his failings. After that, Michael was no longer… quite himself. He spent most of his time in torpor, and when he woke, he rarely spoke at any length, even to Petronius. The city limped on without them, but the Dream was failing. The rest of the Michaelite muses and most of their subordinates fell into madness or degeneracy, becoming worse than useless. The Scion families in service to the Michaelites pretended to serve, but their were daggers behind their backs. Magnus and his progeny readily volunteered his help, but they couldn’t be trusted, while Malachite and his childer despised Petronius for past slights, and Khay’tall and the Children were a major cause of the problems infecting the city. Among his own nominal subordinates, for many years his only assistant was Sariel, an undoubtedly insane but deeply loyal warrior who had long served the Patriarch as his “Sword of the Faith” in distant lands, but in the 1190s he also gained the talented Lotario Acuto as a student and agent. The bond between them was deep, and Petronius came to see Lotario as an adopted childe.

During their investigations on the behalf of the Narsene Lasombra, the formative Concord met Petronius for the first time. Some among them were stunned to meet a man whose works made him famous more than a millennium before, while others were pleasantly surprised by the essential humanity of such an ancient vampire. All though, could tell that through his congeniality and wit, the Arbiter was tired — over-worked, under-valued, and stretched thin. They earned his gratitude and friendship when they threw their support behind him in a play for influence in the middle of a meeting of the Quaesitor Tribunal. This in turn angered Bishop Alfonzo, and led to their boon reward from him being commensurately smaller, but the coterie viewed the trade-off as a positive one. Lucien and Petronius are also old friends, and at the request of his old companion the Roman Gangrel took to working for the Dream in cooperation with his own far-flung concerns. Indeed, in 1201 Petronius formally adopted Lucien into the Michaelites.

In response to the woes besetting his city and the Dream, Petronius took on his old title of Arbiter and effectively seized control of the Michaelites (for what it was worth). Between 1196 and 1204, he worked to reform them by any and all means necessary. He sought other Toreador, and even those of other clans, both near and far, to offer them the positions of the failed muses. His sister-in-blood and ally Vashtai met with some success among the Toreador of Greece, bringing half-a-dozen artists of various pedigrees to the capital on the condition that they would have the Arbiter’s support. Chief among them was Eletria, an elder older than even himself, and Petronius wasted no time in ousting Paul Bathalos and manoeuvring her into the position of Muse of Sculpture in AD 1202. It was a bitter intrigue, for Bathalos had once been a friend and ally of Petronius in better nights, but the guilds under Paul’s purview had slipped through his fingers through madness and inattention some years before.

No sooner had he accomplished this feat that the Arbiter then set to stripping the naif Pakourianis of his station and making Stephen Cerularius the Muse of Painting in his stead. The Dove was somewhat more prepared than Paul, however, and he managed to stave off Petronius’ machinations until the Fourth Crusade happened upon the city and the old Roman’s attention was drawn to the new crisis. With the subborned Militi Christi came the Concord once again, and Lucien ensured that they would be sympathetic to the mission of the Reformed Michaelites. Over the course of the following 8 months, several of the coterie would have much to do with Petronius, Sariel, and several others including Athanasios and Komanos of Stomion. Iulia and Maude became much valued by the Arbiter, and he placed a number of his elite Scholai Guard at their disposal. They also discovered that it was with the Discipline of Auspex that Petronius was most skilled, and he often followed their progress while astrally projecting from his haven.

The Arbiter also cast about within the city for allies among the other Familes as well as independents, though he was far less successful in this regard. Once he was fully aware of the scope of the mission of the Covenant of 3, he approached Natalya Syvatoslav, Thomas Feroux, and Malachite with an overture of alliance, but the Nosferatu elder threw the offer back in his face. It was yet another bitter pill, for Petronius knew that it was his own merciless and hurtful lampooning of Malachite in better nights that had caused such mistrust on his part. He worked feverishly to restore good faith, and as hostilities resumed through the new year he had regained a grudging respect from the Lepers.

Despite the urgency and commitment of those such as the Reformed Michaelites, the Covenant of Three, and the Concord, the Queen of Cities could not be saved from the flood of greed, hate, and betrayal that fell upon the walls in April of 1204. More than most, Petronius had prepared for the worst but not even he could countenance the Final Death of his sire. Michael’s soul was taken by Mary the Black, and the psychic blow of it fell upon the supernally aware Petronius like the blow of a hammer. He fell insensate, and did not recover even a fraction of his wits for some hours.

When he returned to consciousness the weight of 1150 years seem to be upon the Arbiter, for he seemed incalculably tired. He had dedicated his entire existence to the great works of his sire, and while his younger siblings saw that work as the glorification of God, to the Arbiter it was Michael who was his god. Now he was beyond reach, and it had all been for nothing. Petronius was indeed weary, and he allowed Lucien to lead him away to the Harbour of Kontoskalion They were last seen setting sail on the Sea Lion, a nava owned by the old Gangrel’s grandchilde, Ambrose of Portsmouth.

Although Lucien is close-lipped concerning where they went, it is almost certain that the exiled Arbiter went to ground and fell into the Sleep of Ages. It is likely that he lies in torpor still. In order to protect this most worthy Toreador, they keep the secret of his continued existence and allow most others to think that he went to the Final Death in the Great Sack. 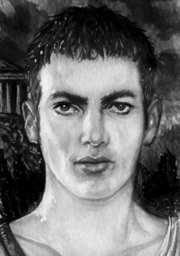