The friend, chief aide-de-camp, coterie mate and influential advisor to Guy de Provence, Petrus was one of the most influential Cainites involved in the Fourth Crusade. He was renowned for his wisdom, sound judgement and deep sense of loyalty.

A pale knight approaching old age. He was clean shaven, and sported very long black hair with a shock of grey at the roots of his crown and temples. An air of quiet dignity surrounded him, and his pale face and dark brown eyes held a careworn, weary expression. The simple yet tasteful cloth of a knight of small means draped his thin, almost gaunt frame, and his only ostentation was a golden medallion depicting an eagle grasping a haunting horn in it’s talons. A sword and dagger were belted at his waist.

Petrus the Troubadour was an ancilla of mysterious origin and agenda, although he was proud to recite his lineage and plain speaking enough in council. As Guy of Provence’s chief aide-de-camp and advisor, he existed outside of the formal ‘status chain of command’ that would ordinarily limit his authority by virtue of his Low Clan origins. In council, his word became known for advising caution, moderation, and fair play in all things — qualities that Sir Guy appeared to rely on Petrus to provide in abundance. In accord with his duties, he was authorised to give orders when his master was indisposed, and also to limit access to Sir Guy as well. At Venice, in the wake of his master’s rage over the intrigues of Geoffrey of Richmond, his willingness to do this made him deeply unpopular with some of the Cainites attached to the crusade. Unlike many of his detractors among the Fourth Cainite Crusade, however, Petrus showed no inclination to use his power for anything but the best interests of his friend and the cause.

While he was always evasive about his mortal origins, it is known that he was brought across in the middle years of the 11th century and that he is native of the Marquisate of Montferrat, though he spent most of his years wandering the counties of Toulouse and Provence. He belonged to the Phaedymites, a small bloodline of the Ravnos clan renowned for their sense of honour and dignity, as well as their knowledge of war and the tenets of chivalry. As the direct progeny of the elder Marcia Felicia Licinia, who was quite active in the latter Roman Empire, he carried a good deal of prestige within the bloodline and his status was also recognised by many French and Italian princes as well. He was a strong proponent of the via equitum, the Road of Chivalry, and devoted much of his time in the 12th century promoting it throughout southern France and northern Italy.

It is during these travels that he made the acquaintance of the ambitious Ventrue, Guy of Provence, and they soon formed a friendship based on a mutual interest concerning the battles of antiquity. Sir Petrus knew many elders, including his grand-sire, Phaedyme, who saw first-hand the battles of Alexander the Great, Gaius Marius, Gnaeus Pompeius Magnus, Gaius Julius Caesar, Marcus Antonius, Marcus Vipsanius Agrippa, Constantine the Great, Flavius Aetius, Flavius Belisarius, and Charlemagne. Indeed, there is a rumour that he committed these accounts to parchment, and that his sire uses his writing to teach other Phaedymites about the art of warfare. For his part, Petrus sometimes used these vivid accounts, as well as his command of Chimerstry, to instruct others on military history, or to outline battle plans for future attacks.

They kept up a correspondence for many years, with Petrus using his travels to keep Sir Guy abreast of intrigues throughout the lands of France and Italy and the Ventrue using his growing influence to make the Phaedymites more welcome in the courts of the High Clans. When the 2nd Cainite Crusade was called, Sir Petrus followed the example of Guy and took the cross. However, unlike the combative Ventrue and Sir’s Gunthar and Phillipe, he was far more useful to the cause engaged as a diplomat and spy, and he rarely accompanied the army (a job that he would perform with considerably more success on the 3rd Cainite Crusade as well). His skill with language and subterfuge saw him advance well in front of the crusade, and often lag well behind too. Indeed, Petrus did not make the acquaintance of Gunthar von Wolfgang until the Fourth Crusade, and clearly did not appreciate the attitude of the secretive and proud Gangrel.

In 1161, Petrus embraced the poet and troubadour known as Francisque of Saissac. The young man had a knight’s education, but his inclinations were more artistic than warlike, and his capacity to network and gather information through the fine arts of carousing were enviable. Petrus saw that he would be a great asset to the Phaedymites, who were increasingly finding their niche in the courts of southern France as messengers, spies, mediators, and loremasters. He would be the first of a number of progeny brought across in the next 35 years (ending with Arnaud of Moncalvo), all Embraced in a concerted attempt to move the Phaedymites forward in the eyes of the High Clans of Toulouse, Provence, Nice, Lombardy, Liguria, and Naples. In this, Petrus had the tacit approval of his own sire, Marcia Felicia Licinia, and the assistance of several of his brothers and sisters, especially Ana Lisa of Montferrat and Ector of Naples. The three consanguinous Phaedymites, plus Francisque of Saissac (or Francis, as he had come to call himself), would distinguish themselves during the Third Crusade, earning a good deal of renown for the bloodline.

On the Fourth Cainite Crusade, Petrus quickly became known as Sir Guy’s chief aide-de-camp. He would finally make the acquaintance of Gunthar of St. Wolfgang also, and they immediately took a dislike to each other. Indeed, they quarrelled over access to Sir Guy when the matter of the saboteur of Zara was brought to a head. Sir Guy had become “indisposed” over the matter of the Lasombra schemer, Sir Geoffrey of Richmond, who had directly managed to pull 3000 men away from the crusade through his manipulations of Baron Simon de Montfort, and also a number of Normans who sought egress from Taranto. Petrus assigned his childe, Arnaud the Brave and also Sir Martin of Toulon to assist the Concord, but their help (though useful) was not appreciated by the Gangrel because of the quarrel.

Petrus was ostensibly in charge of Sir Guy’s information gathering sources, and while he readily admitted that he had experience in such matters, he found spying distasteful and against his natural grain. Even so, his services were quite useful to his master as his contacts amongst the mortal troubadours and camp followers allowed Petrus to keep an ear to the ground. It is thought that he had influence with a number of mortal troubadours in the employ of Boniface of Montferrat, and it is certainly true that Petrus had performed for the Marquis on several occasions. Unfortunately, the Phaedymite was forced to neglect these contacts in favour of his other duties, and the incautious machinations of the exiled Brujah prince of Corfu, Aglaia, led to a frantic scramble to protect the Silence of the Blood. Once again, Petrus was forced to rely upon the Concord for their services, and his respect for the upstart coterie rose accordingly.

As the crusade slipped increasingly from folly to tragedy, even the wise troubadour struggled to reach his dear friend and master, as Sir Guy’s sanity frayed along with his faltering grasp on his assets. After the end of July of 1203, and the qualified victory of the pilgrimage over the city of Constantinople, an uncomfortable wait settled in while the newly installed emperor Alexius IV Angelus sought to raise the resources necessary to fulfill his promises to the crusade. Throughout the oppressively wet autumn and the unusually chill winter, boredom and penury caused many of the crusaders to cause trouble in the city, while Alexius’ stripping of wealth from the churches and monasteries antagonised the populace. The capital became a tinder box, just waiting for some fool to light the match. Felix of Vaucluse and his coterie very nearly did so, but their threat was eventually overcome, once more with the assistance of the Concord and also an unlikely alliance the Baron’s Gangrel. In the wake of Felix’ humiliating defeat, Guy was able to restore his power, which was further bolstered by a proclamation from his sire, Dominius, the highly esteemed Lord of Provence and Istria, declaring the Ventrue to be “duke” of the crusade. The vote of confidence solidified the Guy’s leadership beyond question, and the course of the crusade seemed like it might yet steer for Egypt.

Finally, late in January of 1204, a messenger arrived from Petronius and the Reformed Michaelites, informing Petrus and Guy that the funds had been raised, and would begin trickling into the capital within weeks. Concurrent with the arrival of the first payment, a summit would be held on one of the Princes Islands to hammer out a formal treaty between the Cainite Crusade and the Trinity and Scion families of Byzantium. Determined to ensure peace, Sir Petrus took charge of the delegation from the crusade, and journeyed to the island himself.

The events that followed are confused, inveigled by accusation, embellishment, and propaganda, but the rumours of perfidy and betrayal have ensured that they will hold a dark place in the annals of Cainite history, over-shadowed only by the events that followed. What is known for certain is that the summit was attacked, and that the worst casualties were on the side of the Cainite Crusade. The most grievous casualty was Sir Petrus himself, who was cut down by the Lexor Brujah known as Sir Conrad de Monreal. In the wake of the attack, protestations of intrigue and interference from outside forces were made (particularly by the Concord and the Baron’s Gangrel), but they were drowned out by accusations and counter-accusations of betrayal from both sides.

Matters were not helped by the nigh simultaneous coup of Alexius Mourzophlos Ducas, which removed Alexius IV and installed Ducas in his place as Alexius V. Both the deposed Alexius IV and his father Isaac II were dead within weeks, and all hope of financial salvation perished with them. The mortal barons of the Fourth Crusade clamoured for vengeance and satisfaction of their debt, and declared a renewed war on the city.

Overcome with grief and rage at the loss of his best friend and the betrayal of the Greeks, Duke Guy of Provence declared a state of total war on the Cainites of the Dream. For all his good intentions and works, the name of Petrus the Troubadour would forever be blackened, linked to the calamitous folly that transpired during the Great Sack.

Lineage: Childe of Marcia Felicia Licinia, childe of Phaedyme, childe of the “Black Mother” (d), childe of the Ravnos Antediluvian. Petrus was a member of the Phaedymite bloodline, and he counted himself among the 7th generation. 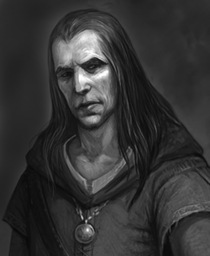