This Gangrel elder is much feared and reviled both for his combat prowess and his past history of committing diablerie. He joined the 4th Crusade in the employ of Guy of Provence, hoping for absolution and amnesty. He is at large.

Handsome in a rough kind of way, this pale northerner has a strong, husky build covered in scars and fine, downy blonde hair. His mane is shaggy, and he looks like he could use a shave. In spite of his good looks, there is a dangerous, animalistic cast to his features and his dark eyes gaze hungrily at those who near him. He is armed with a long hunter’s knife and a handaxe and he eschews armour, wearing only buckskins and a black cloak.

(modified from the character, as portrayed in the short story Eating Medusa, by Patrick Hadley in Dark Tyrants, pp. 77-110)

Variously known as Rollo the Frank or Rollo the Austrasian, this Gangrel has earned infamy for his exploits during the 12th century. While it is thought that he has existed for some four centuries, rumour has it that he spent a considerable portion of those years in torpor from wounds sustained in Carinthia, during the strife surrounding the decline of the Carolingian Empire.

He surfaced again in the last decades of the 10th century, offering his services for pay to the Tzimisce warlords of the Balkans and the Antonian Ventrue of Constantinople. Rollo then returned to the West, and sold his axe to the Lombardic Ventrue and the Grand Court of Paris, encountering much arrogance over his weak blood and Low Clan. By the middle of the 12th century, the Gangrel had quit the Cainite courts in disgust, and fell in with a small coterie of diaberists.

For almost 50 years, Rollo travelled the lands of the Mediterranean, hunting elders in company with his coterie. Assamites, Toreador, Brujah, Ravnos, Settites, Ventrue and more fell to their fangs. Owing to the perilous nature of the enterprise, the coterie enjoyed a fairly high turnover but those who survived grew strong, battened on the ancient blood of their prey. By AD 1190, only three members of the coterie remained. In addition to Rollo were the Cantabrian Lasombra Don Felix Lopez Aguirre de Garandabal and the Italian Settite Marchesa Viella Maria Julia di Messina. They were hated and hunted throughout the lands they stalked, but such was their power that few dared to chance hounding them too fiercely, or at least in numbers too small to be sure of success.

By 1200, it would appear that the coterie had come to a bad end, as one might expect, during a hunt for a particularly ancient Follower of Set (the Medusa, apparently). Whatever the case, Rollo resurfaced in 1202 at Venice. He sought out the Fourth Crusade after being given assurances of safe conduct, and pledged himself to Guy of Provence. Although essentially a hired axe, he did not draw pay and claimed to have given up his foul ways, seeking redemption by serving in the Militi Chisti and saying that he wished only to gain absolution on crusade and amnesty from the agents of the Cainite courts that hounded his steps.

He did not engage in politics at all and socialised little, seemingly content to do his job as the chief scout of the Cainite Crusade and otherwise to keep his own company. While he is handsome enough, and prefers to seduce tavern wenches instead of hunt them down, most Cainites agree that there is something… off… about the Gangrel, and most sensible mortals instinctively shy away from him. Even so, despite his taciturn nature he can be charming. When the rare mood takes him, he has a powerful basso voice and a love of bawdy songs. He is also not without a wry sense of humour, and has intimidated into quiescence at least one impertinent Ventrue crusader by intoning (in perfect Latin) the Lay of the Amaranth, recited of old by diablerists about to commit their awful crime.

“O Maker, Caine of Nod,
Tonight shall bring me closer yet to Thee.
Praised be eternal Amaranth
Whose night-black blossom neither fades nor withers.
Always may I feast at her dark banquet.”>

The Ventrue in question (one Bertrandus d’Apt, childe of Felix de Vaucluse), was suitably mortified, but Rollo thought the joke was quite funny.

Late at night, while swapping stories at a Gather of Gangrel crusaders, Svenin discovered that Rollo is a descendant of Lucien the Roman. Furthermore, the older Animal claimed that whatever Lucien’s pretensions might be now, he was at one time a power hungry agitator who had sired many times and used his descendants as expendable pawns in his schemes. Indeed, Rollo’s own beloved sire Clothilde died uselessly and he was thrown into torpor for many years because of one of the Roman’s games. He added that despite his desire for redemption and amnesty, Rollo would happily endure the Blood Hunts of the elders for the rest of his nights if he could but exact vengeance on Lucien first. Svenin wondered out loud if that was the true reason that the Frank had joined the crusade, and Rollo gave him only a feral grin in response.

Despite his ambitions and his ardent pursuit of them during the Great Sack, Rollo apparently failed to track down his ancestor. Embittered but always pragmatic, he set himself to looking for a fresh war, and he soon found his way into the growing army of Cainites and kine that was mustering behind the banner of Hugh of Clairvaux. Rollo the Frank was present in the crowd when the valiant Ventrue Templar was assassinated by Assamites, and he was one of many who was caught up in the blood lust after the event. Reportedly, he went on a rampage hunting the Assassins, for he has a well-known paranoia of the Banu Haqim. He refuses to be drawn on why, saying only that the Turks have it in for him so he’d rather get them first.

After the army of Hugh of Clairvaux fell apart, Rollo walked away from Constantinople. He is at large, and rumours have placed him fighting in the pay of certain Bulgarian Tzimisce.

Embrace: Soon after the turn of the 9th century.

Lineage: Generally unknown. Rollo ceased telling it centuries ago, and those old enough to remember it rarely cared to know it. He was thought to have been of the eleventh generation when Embraced in the first years of the 9th century, but he is known to have taken the souls of no less than four elders since. Among the Gangrel who were attached to the Fourth Crusade, it is known that he is a descendant of Lucien the Roman. 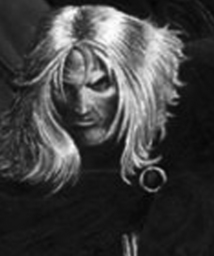