This elder of the Children of Judas operates one of the most exciting, and dangerous, dens of iniquity in the Queen of Cities- the Silk Road.

A tall, androgynous youth perhaps fifteen years of age, with long, slender fingers. Delicate bones frame his pale face, which is laced with blue veins. His long, silky hair is dyed red with henna, and his blue eyes (or did they just change to brown?) almost seem to capture you. His lips are twisted in a wry, suggestive smile, as if the whole world (including you) is there for his amusement and pleasure and he expects to get around to doing everything sooner or later. He wears rich Byzantine robes, though he is in a state of semi-undress.

In AD 489 the Children of Judas were established as a Scion family existing under the nominal protection of the Michaelites or, more accurately, the methuselah Patriarch himself. Apparently the story goes that long ago, not long after the founding of the Dream, the ancient Toreador and Khay’tall, the founder and leader of the Children, reached an accord that true goodness is hollow and meaningless unless it is reflected and challenged by true evil. To that end, it was the stated aim and duty of the Children of Judas to bring the Dream down by being the proverbial “Serpent in the Garden of Eden”. This was a sacred duty that they would perform with relish, and Sarrasine was the first that Khay’tall would bring across. Over the seven centuries that he dwelt in the city, he enjoyed the favour of his sire, and he would become known as the Favoured Son.

Sarrasine founded and ran the infamous tavern and festival hall known as the Silk Road, and over the centuries it gradually became the communal haven and nexus of operations for the entire Family. Naturally, all of them maintained their own secondary and tertiary havens elsewhere, but the Silk Road is where they gathered to plot, socialise, and make their offerings to the Adversary as personified in Set Who is Typhon. Unlike the younger Children, he did not chase after the Cainites and kine of the city but rather simply advertised the pleasures and bounties of his establishment and allowed them to come to him. Cainites are sinners by nature, and experience showed Sarrasine that nearly everyone would show up at his door sooner or later. He never insisted that visiting Cainites partake of the festivities, but he is a master at bringing out the essential carnality within everyone, and he particularly excelled at bringing the younger Michaelites low by helping them learn to indulge themselves. At the Silk Road, discretion was observed, though not assured. Chief among his conquests was the talented Galatea, the adopted childe of Petronius, who found herself ruined and despairing over the circumstances of her Becoming. After enticing her to accept the degeneracy on offer at the Silk Road, he enjoyed parading in front of both of her sires and using her to bring more of the younger Michaelites into his fold. One of those that he most enjoyed tormenting was Galatea’s progeny Lotario, who sought many times to break her from her dependence upon Sarrasine.

Both Veceslav Basarab and Bernhard Billung availed themselves of the hospitality of the Silk Road at different times, and for different reasons. Sarrasine was hospitable and accommodating to all comers, providing that they understood exactly what they were letting themselves in for. According to the mandate of the Children, upon which Khay’tall insisted, the forbidden fruit had to be offered, not forced. The choice of each individual had to be their own.

Khay’tall grew increasingly withdrawn over the months after the first siege of Constantinople in June of 1203. As the situation between the Fourth Crusade and the city worsened with the deposition and subsequent deaths of Alexius IV Angelus and his father Isaac II, the Nuerian Serpent descended into brooding inaction. By February of 1204, Byzantine forces and the crusaders were actively skirmishing across the Golden Horn, and it was obvious that war would soon be upon them once again. Sarrasine remained close by the side of his sire, perhaps sensing the depths of his depression and seeking to either take advantage of it or make plans for the future.

On the 15th of March, the evening after Ash Wednesday, a heavily distraught Sarrasine appeared in the Elysium of the Great Palace, screaming about assassination and betrayal, weeping over the murder of his beloved sire and mentor of centuries. Loudly, he made a show of his innocence and his grief. Few believed him, or in truth really cared, for they had more important matters on their mind. Sarrasine disappeared from the Queen of Cities shortly thereafter, and agents of the clan elders who arrived from Thebes a month later seemed to be cagey as to whether Khay’tall had in fact suffered the Final Death. They moved on shortly, apparently quite interested in hunting the self-exiled Favoured Son.

In recent years rumour has placed Sarrasine, now sporting his natural blonde hair rather than the henna-dyed red of the Children, in the Holy Land and in Egypt. If he has any fear of his own clan, it seems strange that he would move closer to their base of power in the East. Evidently, if they suspected him of patricide he has satisfied the elders of the Settites that he is in fact innocent. Or, as some snidely comment, he has simply convinced the ancient ones of his treacherous clan that his heretical sire was simply not worth avenging.

Lineage: Sarrasine places himself among the 7th generation. He was the childe of Khay’yall (d), childe of Nehsi; further lineage is unclear, but Petronius speculated that Nehsi might be the childe of Heqaib, an ancient Hierophant of the clan known to be headstrong. Heqaib was the childe of Set. 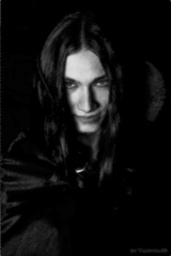