A Ventrue elder from the Amalfitan Coast; seemingly aloof from the cut-and-thrust politics of the Latin Quarter and more interested in enjoying herself, she is one of the few Latins to enjoy the hospitality of Cainites from every part of the city.

A beautiful young woman with pale, creamy skin, sharp features and shoulder length red hair. She is quite graceful and chooses to accentuate that quality by wearing conservative, flowing robes and dresses in the style of the Byzantine nobility. Her green eyes sparkle with knowledge and intelligence and a friendly, disarming smile springs easily to her lips. She is unarmed.

As someone who joined the ranks of Byzantium’s undead after the Massacre of the Latins, Serafina has accomplished much by virtue of her friendly, polished manner and her charm. Indeed, to the Cainites of the Latin Quarter in general and the Amalfitan neighbourhood in particular, she is indispensable to the pulse of the city. Even before the" Great Sack,“:https://en.wikipedia.org/wiki/Sack_of_Constantinople she moved about the city unfettered, and was welcome in the courts of both Latin and Byzantine powers. Her blood is not so strong as that of her ”/wikis/the-antonian-ventrue" class=“wiki-page-link”> Eastern Roman cousins, nor is her influence a match for the coteries of knights that remained behind after the Fourth Crusade, but Serafina is an elder in her own right (having been Embraced in the early 8th century), and she plays the dangerous game of Elysium better than most. While she does cultivate a certain mystery as part of her reputation, her lineage is well known and quite illustrious. She hails (albeit distantly) from the blood of the legendary Tinia, who once dominated the Etruscan civilisation as their Sky-God, and Collat, who is thought to have supported the foundation of Rome.

Serafina d’Amalfi was admitted to the Latin Quarter by the Narsene Lasombra in the spring of AD 1201. Having once been a strong player for the princedom of Amalfi in the late 11th century, she is looked upon with great suspicion by the younger and weaker Master Alfredo, who is a descendant of her late former enemy, Lupercio. Alas, the Brujah was powerless to refuse her settlement in the Amalfitan Quarter, and Serafina exists there as one who does very much as they please in ‘his’ domain. Perhaps fortunately for Alfredo, the Ventrue elder appears to have little interest in usurping his weak position, instead choosing to spend much of her time socialising with her ‘social equals’: certain fallen Antonians and Michaelites as well as independent elders, a number of the new Latin magnates and, of course, Prince Alfonzo.

Serafina appears to be in lust with Byzantium itself — the sights, smells, pace, architecture, and history of the Queen of Cities. She claims that she spent a considerable period in torpor, and that reconnecting to these things is more important to her for the moment than indulging in wasteful intrigues. Her sire, Grimoald the Lombard, was the mastermind behind the creation of the Duchy of Benevento in the 6th century, and his mortal descendants ruled it. Grimoald was renowned for the tight grip he held over his progeny; allowing them little time beyond advancing his own schemes. He was driven into torpor by Brujah enemies from Atrano some time in the early 11th century, and has not resurfaced. For her part, Serafina is dismissive of both his ill treatment and current disposition, saying wryly that he was really a “gentle tyrant who lost his place in time. It was inevitable really…”

Cainites of the city assume (of course) that Serafina is not so politically ambivalent as she appears, and that she is secretly maneuvering into playing a longer game than her younger rivals can imagine. She tends to laugh the notion off, saying that they are probably right, before changing the subject to friendly gossip or inquiring about a historical piece of art or trivia. Few can deny her charm or manner, but it is clear to the more astute that she has little use for the neonates or even many of the younger ancillae of the city.

Embrace: She has often enough that she was brought across early in the 8th century. 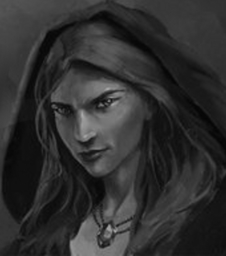