This notorious scoundrel was was a pirate who bedevilled Genoese and Pisan shipping froms galley, the Raptor. A nominal member of the Serene Brotherhood, he was slain by the Concord in their attack on the Monastery of St. John Studius in 1204.

This Cainite was a good-looking rake, typically found wearing leather cour bouilli and clothes in the latest fashions of Venice, although they generally seemed to have seen a good deal of wear. His wavy black hair was pulled back into a pony tail, his waxed beard and moustache lent him a devilish charm, and his dark eyes carried a note of challenge in them. A pair of short, heavy swords were worn crossed at his back, and no less than four small knives were kept at his belt and strapped to his thighs. He wore a distinctive sapphire stud in his left ear.

From AD 1202-1204, Silvio Veccio was among the Narsene Lasombra and other Cainites of Venice who undertook the pilgrimage of the Fourth Cainite Crusade. Unlike some of his fellows among La Fratellanza Serena (the Serene Brotherhood), as the coterie called itself, Silvio had little interest in advancing the interests of Venice over the crusade and the Eastern Empire. Rather, he took the cross because he liked to fight, and if he could gain further regard among the Narsene Lasombra at the point of his swords then he was quite happy to do so.

Additionally, despite undergoing his Becoming more than a century before Salvatore Varagine, Silvio recognised that the younger vampire had much to teach him. Salvatore had advanced far among the followers of Narses in a short length of time, while he and his own progeny, Fabrizio d’Allatio, were left as little more than blunt instruments among the fleets of the Serene Republic. Under the patronage of Salvatore, each had advanced to the point where they commanded a galley-of-war, Il Raptore (the Raptor) and La Manticora (the Manticore), and they owed him much.

Silvio’s role throughout the pilgrimage was to use his influence as a known, experienced sea captain and commander to guide others of his ilk. Unofficially, he also made a point of placing himself between his patron and any danger, and Silvio was observed to be an extraordinarily lucky and capable swordsmen on several occasions over the course of the crusade. His progeny, Fabrizio, briefly worked in an identical role, but after it was conquered by the crusade he was sent to Negroponte in order to secure Venetian interests there. After the first siege of Constantinople ended at the beginning of August, 1203, it was frequently Silvio that also took the point in Salvatore’s heavy-handed dealings with Bishop Alfonzo and the other masters of the Latin Quarter. He put his skill at swordplay and brutality to good use there, delivering a drubbing to a number of worthy fighters to cow any hopes of resisting the will of the Serene Brotherhood as they moved about on the business of Narses.

Unfortunately for Silvio Veccio, his vaunted luck would desert him on the 12th of April, 1204, as Constantinople fell under the might of the Fourth Crusade. While the city endured the rapine and pillage of the Great Sack, the Serene Brotherhood attacked the Monastery of St. John Studius. At least in part, their motive was to to loot the library and destroy the Gesudians, but it is likely that their true hope was to drink the souls of the Tzimisce monks, whom they perceived to be weak prey of potent blood.

When the Concord came upon the scene of the Chapel of the Divinity Within, they observed that Silvio was one of those present for the attack on Gesu, who begged them all to flee and save themselves as Salvatore, Brother Carmichael, and Remigio del Nero used the Arms of Ahriman to restrain him. Silvio must have already taken the Heart’s Blood of one of the Gesudians, for when he saw the enemy coterie his uncharacteristically maddened eyes bulged with excitement and he smiled arrogantly through his blood stained lips. As he sauntered over to counter them, he summoned Arms of Ahriman of his own, seeking to delay Veceslav Basarab as he engaged Svenin the Tall. Georgio Renzo followed his lead, summoning further tendrils to hold back the Tzimisce, and several ghouls followed them in to the fray.

For all Silvio cared he might have been facing the Concord alone, but his blithe confidence was disrupted when Veceslav completed his transformation into the zulo form and burst the tenebrous tentacles of the two Lasombra. Then the Venetian duellist was attacked in turn by the Arms of Ahriman summoned by Iulia and, confused for a moment, he failed to dodge the strike of the Viking’s Daneaxe. It struck him square in the forehead and Silvio fell to the floor of the chamber, at the very least driven into torpor but quite likely delivered unto the Final Death.

The distinction was rendered moot less than a minute later, when the violence dealt by the manifestation of Gesu’s Divinity Within caused the ceiling to collapse, and the Lasombra duellist was pulverised under hundreds of tonnes of stone and dirt. 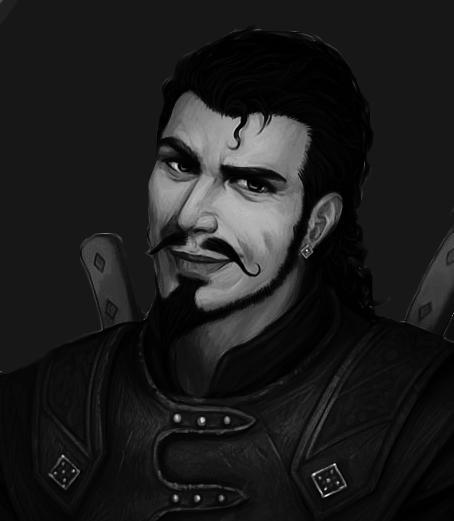