The childe, seneschal and errand-boy of Sir Felix of Vaucluse, this Cainite didn't seem to be a bad fellow, company considered. He was destroyed in April of 1204.

A pale, handsome Frankish knight approaching his prime, with short, expertly manicured hair and only the barest dusting of whiskers on his chin. His arms and armour were of excellent, largely unmarred quality but he wore them with the practiced ease of training. A surcoat of white bore his symbol: two red pillars on a field of gold, with a green laurel wreath and 3 black annulets displayed prominently. Initially, he had an introspective, intelligent air about him but when he was possessed by Publius Messorius Fidus, Bertrandus took on a confident, even cocky demeanour. 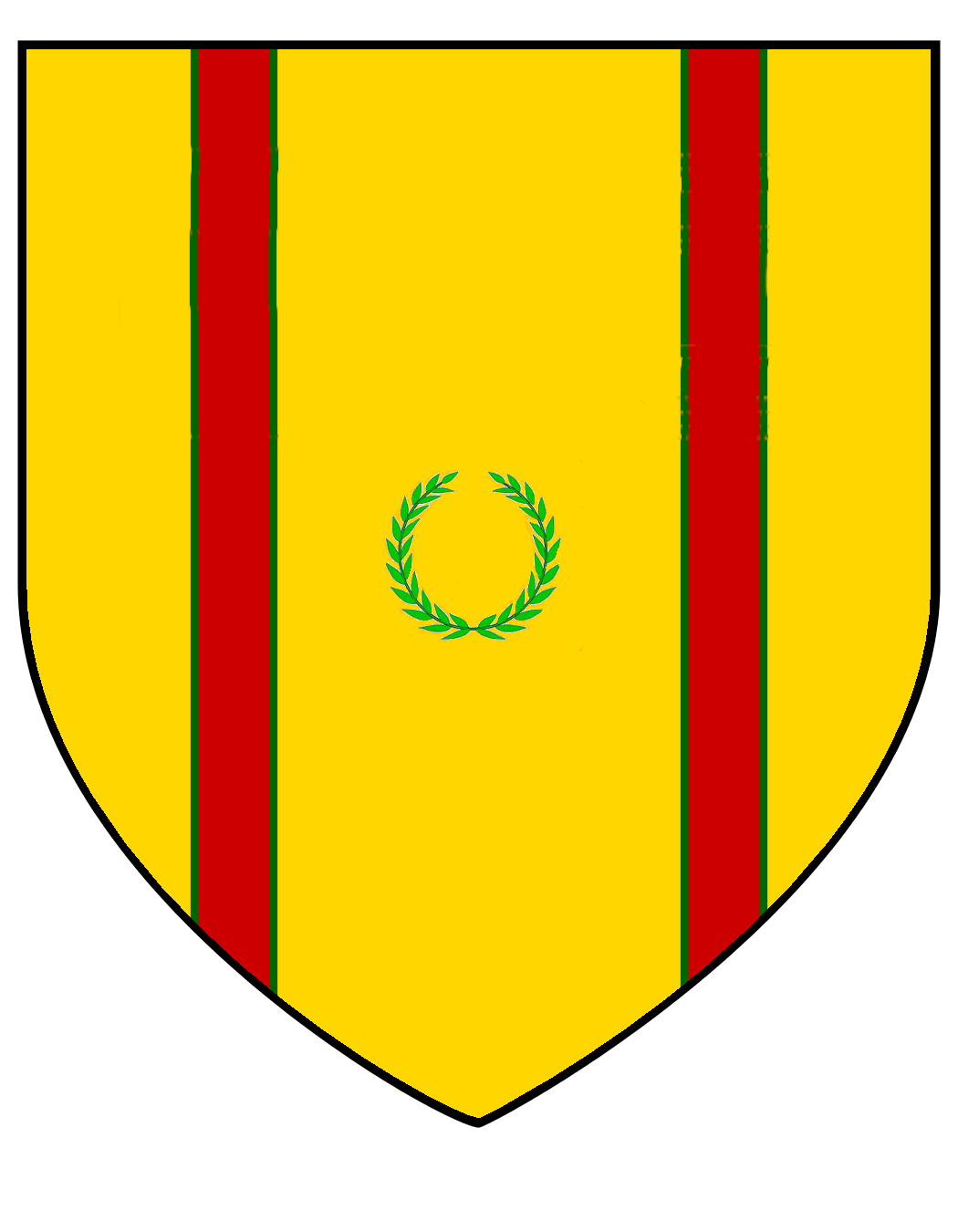 The coat-of-arms of Bertrandus, Chevalier d’Apt. The columns and the golden field depicted his loyalty to Rudolf, Prince of Mâcon (and by extension his own sire, Felix), while the laurel wreath is the symbol of the House of Fabricius.

Sir Bertrandus of Apt was the progeny of Sir Felix of Vaucluse, a prominent Cainite leader of the Fourth Cainite Crusade. He was thought to be young to the Blood, having been Embraced as late as January of AD 1197. Bertrandus was easily convinced to accept the Embrace as he had always been something of an elitist, unhappy with his low birth order and sure that destiny would provide for him, sooner or later. As the younger brother of the influential mortal Lord of Apt, Sir Bertrandus was well-connected throughout the noble circles of Vaucluse and Provence; just the sort of man that Sir Felix required to reintroduce him to his native region after many years serving his own sire in Burgundy.

Two years later, he enthusiastically took the cross alongside his sire and cousins of the House of Fabricius, and easily fell into the role of his sire’s seneschal for the pilgrimage. Unlike many of his fellows he developed a reputation for being both practical and pleasant, though these traits often lapsed under the disapproving eye of his master. On Corfu, when the Toreador Lotario Acuto was detained by Sir Russel and Sir Felix’ party on their way to capture the Cappadocian charnel-maid, Drenis, Bertrandus volunteered to allow Lotario to double up on his horse and ride with him. After the Toreador newcomer later fell from the beast, Bertrandus was quick to show some kindness and help him back to his seat.

Bertrandus’ education as a Cainite and a Ventrue began not long before the launch of the the Fourth Crusade embarked, and much of his training and experience was entirely coloured by the events of the armed pilgrimage. In truth, he was really still a fledgeling, and Felix had certainly made no indication of any plans to release him in the near future. Sir Bertrandus knew enough of the society of the Damned to recognise the power of his lineage and clan, both of which were the source of great pride for him. He understood the Traditions also, and had a good grasp of Cainite laws and precedents. Presumably he knew of his sire’s act of diablerie at Zara, although he had expressed no emotion or opinion on the matter so far as any outsider to the House of Fabricius was aware. Even if he did know, it is unlikely the young Ventrue would have dared gainsay or speak out against his sire.

For some time, it appeared that while Bertrandus was young, he was talented. He had a flair for organisation, a clear mind and a good pair of eyes. Additionally, it also seemed that he was quick and graceful of step. As the Concord attempted to connive Sir Felix’ downfall at Galata, Bertrandus was the only the member of the House of Fabricius sharp enough to spot Lotario in his guise as Reza the Turk. He gave chase and, spryly avoiding the diversion that the Toreador arranged, almost laid a hand on his quarry. Alas, the Ventrue was unwilling to follow “Reza” out of a three-storey window to continue the chase.

Several nights later, Sir Bertrandus was a member of Sir Felix’ boarding expedition against Lucien’s disguised cog. He stayed close to his sire and Sir Tancred the Bear for much of the melee, using his Dread Gaze to drive attackers from their flanks. When Felix finally panicked and fled, covered by Sir Tancred, Bertrandus lingered long enough to note Wendel of Burgundy’s hopeless situation with disgust. The look of arrogant disdain on his features belied a nature far more formidable than his usual mild manner or few years undead should indicate. In those few moments with no witness among his own, he sent Brother Adalbert to flight with his Dread Gaze and displayed uncanny accuracy with a knife toss at Veceslav. Once more, he also demonstrated his speed with the near-supernal ease with which he side-stepped a masterful lunge by Lotario. He then dramatically used the Toreador as something of a spring board to dive into the Bosporus and make his escape.

Apparently, there was more to this young vampire than met the eye…

In April of 1204, as the Fourth Crusade entered its second night of burning, pillaging, vandalising, and carting off nearly 1000 years of Byzantine splendour, the secret of Bertrandus of Apt was finally revealed. Having gained intelligence that the Church of Eirene harboured a secret entrance to the lair of the Patriarch himself, the young Ventrue directed the House of Fabricius there. However, though they looted much of the treasure of Magnus and the Orthodox Lasombra, Felix of Vaucluse and his lackeys were unable to discover the secret door. They did chance upon the Lexor senator Sir Conrad, however, and after subduing him in a costly struggle they began torturing him for the information.

This proved to be their undoing, for Conrad had powerful friends. The Concord struck viciously to recover their comrade, and the unprepared*House of Fabricius was woefully outmatched. Struck by a grenade of Greek Fire hurled by the ancient Gangrel, Lucien, Bertrandus’ fate was sealed. As he went up in flames, the Ventrue neonate revealed an apparent proficiency with the Obtenebration discipline — using the Arms of Ahriman to grapple with the Gangrel. The lie to this display was given but moments later, however, when a black shadow vomited out of his mouth and took flight for the safety of the rooftops.

Publius Messorius Fidus, the ancient Toreador that made Bertrandus his unwilling catspaw.

Apparently, the young Ventrue was not half the villain that his sire hoped, for it was now clear that another Cainite had possessed the young Ventrue, turning him into a puppet so that the House of Fabricius might be manipulated to the ends of some unknown entity. Lucien gave chase, and although he was unable to subdue the ancient one, he did discover his identity: Publius Messorius Fidus, a Toreador elder of the Incognitus. The Ventrue neonate was now finally free of the ancient Toreador.

Of course, this information did nothing to console young Bertrandus. His faculties finally restored, the disbelieving Ventrue neonate had time only to scream piteously as the Greek Fire consigned his body to the Final Death… 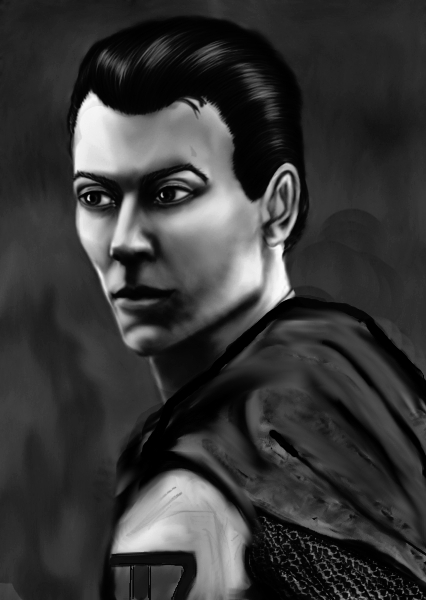