One of the captains of the Fourth Cainite Crusade, this wealthy and arrogant Ventrue hailed from a prominent Holy Roman Imperial bloodline. He was diablerised by Veceslav Basarab during the sack of Constantinople in April of 1204.

A very handsome, pale young knight with long, chestnut hair and smouldering brown eyes. He bore the very best mail and weapons that silver could buy, a white surcoat (which bore his heraldry) and cloak which were immaculately laundered, and a prominent gold ring set with a large ruby adorned his left pinky finger. He wore his power and arrogance about him like a cloak, and his disdain for his inferiors was quite apparent. 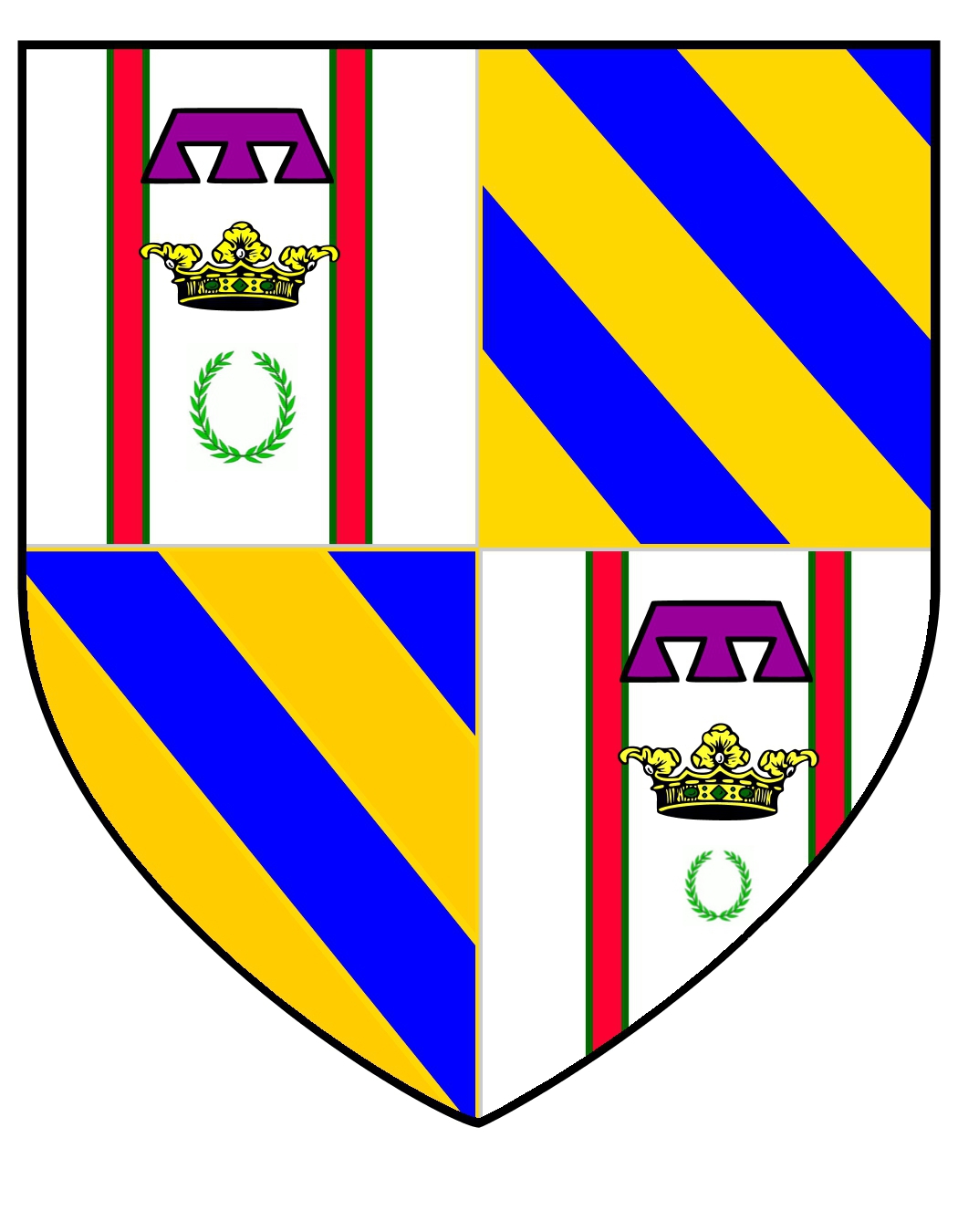 The coat of arms of the late Felix de Vaucluse, Chevalier et Seigneur de Varsante et Vincelles. It signified that he was a knight of the Duchy of Burgundy, a scion of the House of Fabricius and heir to his sire’s domain- the city of Mâcon. Like many of those adopted and stubbornly maintained by Cainite nobles, it was finalised in the early days of heraldry, before certain rules came into being.

Blazon: Quarterly 1st and 3rd argent, in pale a label purpure, a crown or and sable and a wreath vert, endorsed gules fimbriated vert , 2nd and 4th bendy or and azure.

Sir Felix of Vaucluse was one of the more bellicose and greedy captains of the Fourth Cainite Crusade. At every turn of the pilgrimage, he proved himself to be an enemy of peace in general, and the Dream of Constantinople in particular. He was the first of the Frankish leaders to support the diversion to the Queen of Cities, and constantly agitated for battle whenever the opportunity presented itself. However, Sir Felix was a captain in name only. While his skill at arms was undoubted, his skill at leading men and Cainites into battle was indifferent at best; sharpened only by a series of skirmishes with rebels after the fall of Zara and a handful of night raids on Chrysopolis, Abydos and Constantinople herself. Indeed, Sir Felix was actually a bad commander, having little grasp of tactics, no practical understanding of strategy and absolutely no empathy for the suffering of men under his command. One may well wonder, then, why he had a seat on the Small Council of the Fourth Cainite Crusade at all?

The answer is quite simple. Sir Felix hailed from the House of Fabricius, one of the most wealthy and prestigious Ventrue bloodlines in the West. Gaius Fabricius, an elder of the fifth generation, was Embraced by the near-mythical ancient known as Tinia in the middle years of the Roman Republic. His feud with Demetrius, an equally powerful elder who ruled as Prince of Massilia (now Marseille) until the time of Charlemagne, is legend. The private jyhad between the two elders has existed for well over 1000 years, and shows no sign of abating. Sir Felix’ own elder sire, Prince Rudolf of Mâcon, has chosen to perpetuate this feud from his own power base in the southern reaches of the Duchy of Burgundy. Rumour has it that the House of Demetrius was interested in the Fourth Crusade and that the House of Fabricius merely outmaneauvered them by offering more funds and more swords to the cause of Dominius and Guy of Provence.

In other words, Sir Felix’ only reasons for being on the pilgrimage had everything to do with politics and the games of status and absolutely nothing to do with “breaking the back of Islam” at Damietta.

It is no wonder then, that this ancilla spent the entirety of the Fourth Crusade fighting off his boredom, slaking his lust, and looting whatever he could carry from whomever and wherever he could. When he was imposed on the pilgrimage in AD 1200, his lack of honour and competence earned the speedy disdain of both Guy and his brothers-in-arms, Petrus the Troubadour and Russel of Cassale. Indeed, in short order they came to actively despise the fellow due to his wicked ways and willful disregard for their holy mission. Sir Felix spent much of his time in back rooms intriguing against his “equivocal superiors”, and he eventually developed a power base of some eighteen Cainite followers of questionable loyalty and black reputations. His very presence on the pilgrimage was a blemish on the honour of his fellows and a dangerous influence on their ambitions. And yet, they could not do without him. Aside from his unimpeachable status, the bastard was very, very rich. Indeed, Sir Felix of Vaucluse was one of the wealthiest knights on the entire Fourth Crusade, and his silver bought his fellows many swords and considerable (sorely needed) influence in the councils of the mortal barons…

Sir Felix possessed considerable lands of his own in the Dauphinate of Auvergne, the Duchy of Savoy, and the Duchy of Burgundy. His base of power was in the last of these lands and most especially in the region of his sire’s own dominion in and around the city of Mâcon. Unlike many of the Cainites on the pilgrimage, he held considerable station in the mortal sphere. In life, he was the second cousin of Duke Eudus II, and he wore the colours of the House of Burgundy alongside those of his Cainite bloodline. Along with his greed, this pride was Sir Felix’ greatest weakness for his easily slighted honour made him impulsive and prone to wrathful and ill-advised actions.

Due to the investigations of the coterie of Hungarian Cainites known as the Concord of Ashes, Duke Guy and Sir Petrus were fully aware that Sir Felix and his closest followers apprehended and diablerised a coterie of Dalmatian fugitives after the Sack of Zara in December of 1202. They could likely have ruined Sir Felix’ reputation with a word. However, they were also acutely aware that to do so would cast doubt upon the prestige of the entire Cainite Crusade, so they instead chose to keep their peace. Of course, Guy and Petrus let slip to Felix their knowledge of his crime, thereby holding some influence over his behaviour for the best part of twelve months.

With the damning information in hand, a delicate balance became the order of the night. With the vast majority of Cainites on the pilgrimage sworn to Duke Guy, Sir Felix became a distant but dangerous second, while the Templar captain Hugh of Clairvaux represented a very stable and growing third column of Cainite leadership. Brother Hugh’s nominal support of Guy, as well as the firm support of the rest of the Small Council, kept Felix and his greedy supporters in check. However, the Concord of Ashes and the wiser Cainites Crusaders levelled a weather eye on this troublesome villain, lest his power grow to threaten the Dream and the Fourth Crusade.

Throughout the course of his intrigues and investigations, Lotario Acuto discovered that Felix of Vaucluse only fed from prostitutes. He visited high-class brothels wherever he went, forever seeking to add the bastard daughters of the nobility to his herd of blue-blooded courtesans…

Over the winter of 1203-1204, with Duke Guy’s position growing increasingly tenuous due to the external pressures of the tense interplay between crusader and Byzantine imperial politics as well as the machinations of the Antonians, Felix sensed weakness and began subtly laying the groundwork for a bloodless coup. Once again, the Concord interfered, engineering a scenario with a bogus Byzantine tribute boat that caused Felix’ greed to over-rule his already questionable judgement. The attack on the treasure-boat was an ambush; the House of Fabricius and their allies faced odds that they couldn’t possibly overcome, and Sir Felix panicked. He fled the assault, revealing a cowardly and treacherous nature. His support among the Cainite mercenaries and lesser known knights crumbled in the wake of the disaster, and his credibility as a rival to Duke Guy evaporated within a matter of a few nights.

As the political situation deteriorated over the following months, the House of Fabricius receded into the background to lick their wounds. They were not encountered by the Concord again until April 13th, the second night of the Great Sack, when they discovered their enemies pillaging the Church of Eirene. In addition to Felix, those present were Colard de Parcey, Tancred l’Ours, Bertrandus d’Apt, the Toreador Mabile de Montceau, the Nosferatu Thierry de Villiers, the Tremere Florian von Marxzell and over 120 knights and sergeants-at-arms. Their overwhelming numbers precipitated a detour to a second entrance to the Patriarch’s haven — the dolphin fountain of the Great Palace.

Hours later, after surviving a harrowing attack by the Baali Mary the Black and witnessing the remains of the late Michael, the Concord discovered that the House of Fabricius had captured their friend Conrad and were in the process of torturing him for the location of a secret entrance to the treasury of the Magnus Orthodox Family inside Hagia Eirene. Evidently, the villainy and ambition of Sir Felix had reached new heights, for (unknowing that he was already too late) he desired the Heart’s Blood of no less than the Patriarch himself. When they reached the surface, most of the mortals were accompanying Colard and Florian as they departed with the loot from the church. Only some twenty men remained with Felix, Mabile, Tancred, Bertrandus, and Thierry.

What followed was as fast as it was devastating. Thousands of animals descended upon the square, summoned by Lucien, Svenin and Veceslav, while grenades of Greek Fire were hurled at Sir Bertrandus and Thierry. Most of the enemy coterie were neutralised within seconds. And yet, battened on the stolen blood of a Byzantine Cainite (later discovered to be Cyricus Justinan), Sir Felix stood up to the best that some of the Concord could offer. However, as his allies perished at an alarming pace, the Ventrue knew that his luck and low cunning had finally deserted him.

It was the ghoul, Francois, who landed the first telling blow, throwing Felix off-balance and allowing Veceslav to mangle the Ventrue’s superior armour with his claws. Panicking, Felix swung his sword wildly, losing both his weapon and his feet in the progress. Brother Adalbert used the opening to attack with his Dread Gaze, leaving Sir Felix in a blubbering, near catatonic state.

At this point, Veceslav tore the Ventrue’s mail open at his chest and, smashing his hands into either side of Felix’ chest, used his Vicissitude power to cause the rib cage to implode. The seat of his vitae pierced, an enormous gout of stolen blood and gore sprayed skyward in a crimson fountain. The Tzimisce, in a display of absolute scorn, then bent and sucked the heart’s blood from the exposed organ.

Iulia of Weißenburg, who witnessed the act, later remarked that it was ironic that Felix of Vaucluse, who had hoped to climb to the top of Cainite society through the theft of other vampire’s souls, had suffered the same fate himself.

Lineage: Felix of Vaucluse was Embraced among the 7th generation, but several hours before his own demise he took the soul of Cyricus Justinan, thus lowering his effective generation to 6th. He was the childe of Prince Rudolf of Mâcon, childe of Gaius Fabricius, childe of Tinia (d?), childe of Ventrue. 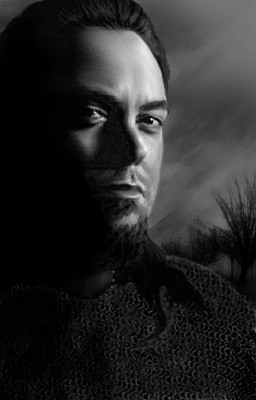