One of several members of the Order of the Sable Rose who joined the Fourth Cainite Crusade at Venice, Godefroi was the most pleasant of his fellows. He crafted a huge mail hauberk for Svenin the Tall.

A short, pale, good-looking man who carries himself like a high noble yet wears the garb of a Knight of St. John. His noble demeanour is enhanced by his rounded, gentle features and the meticulously groomed moustache and goatee that graces his countenance. He has a deeply pious, meditative mien and his soft brown eyes are steady and serious within the shadows of the hood that that he customarily wears. His armour and weapons are of particularly fine quality, even for a brother-knight of the military orders. 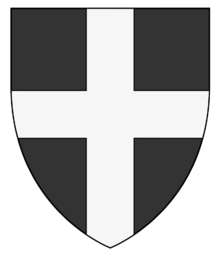 The uniform coat of arms of the Order of Knights of the Hospital of Saint John of Jerusalem, also known as the Knights Hospitaller.

Like his brethren among the secret Order of the Sable Rose, Godefroi is a masterful armourer, and his understanding of metalworking is many decades in front of even the best mortal smiths. When Svenin the Tall met with him in private, he saw extraordinary pieces of armour on a stand in his tent. These included a cuirass, gorget, vambraces, rerebraces, greaves, and cuisses, all intricately decorated with motifs of roses, crosses, and bible verses. Brother Godefroi explained that the special armour is reserved for when the Knights of the Sable Rose ride out against the infidel.

In AD 1202, Brother Godefroi of Caen was one of four Toreador Knights of the Sable Rose who joined the Fourth Cainite Crusade in Venice. Unlike his brethren Thierry of Amiens and Roderick of Rouen, Godefroi demonstrated himself to be personable and gregarious, and he used the opportunity of the Council of the Cainite Crusade to network among the gathered magnates on behalf of the Grandmaster of the Sable Rose. His progeny, Brother Ancelin, was also present at Venice, but he did not take ship and join the crusade. It was Godefroi who recognised Sir Gunthar of Sankt Wolfgang from their shared time on the Second Crusade and he pointed out the Gangrel to his brother-knights, both of whom gave the older Cainite a respectful nod.

Like Brother Thierry, Godefroi was horrified to see the city of Zara sacked by the crusade several months later. They sharply rebuked Brother Roderick for his participation in the machinations of Felix of Vaucluse during the events surrounding the fall of the city and the attacks on local Cainites. However, it was not until the crusade left the island of Corfu that they were able to bring Roderick to heel and disengage their hot-tempered brother from the intrigues of worldly vampires. It was also on the island of Corfu that Svenin the Tall approached Brother Godefroi with the notion of crafting him a hauberk of unusual size to account for his giant frame.

At loose ends due to the interminable waiting, the knight of the Sable Rose agreed to the request. To repay the favour, in future Svenin would present whatever religious relics that he “found” to Godefroi’s order. The finished product would require more than 60,000 riveted links and take more than five months for the monk to complete around his other activities. He presented the Gangrel Viking with the hauberk in January of 1204, just a few months before the Great Sack.

The Hospitaller Order did not officially take part in any stage of the hostilities with the Eastern Empire, including the fall of the city in April of 1204. However, they did make use of their healing skills to establish infirmaries to see to the health of their fellow crusaders, and the Order of the Sable Rose despondently attended to these duties while they vainly hoped for a correction to the disastrous course of the Bitter Crusade. When the Great Sack commenced, the Hospitallers established a number of infirmaries on the burnt ground near Blachernae and in the Latin Quarter, and to their credit, they treated the ravaged people of Byzantium as readily as their disgraced fellow pilgrims. Both Thierry and Godefroi were very much active in these medical tents, but Roderick was less so.

In any case, once it became clear that crusade had floundered after the fall of Byzantium, the Order of the Sable Rose took the opportunity to entrench themselves within Constantinople. Just as commanderies of the mortal Hospitallers would be established, so too would the reach of their immortal puppet-masters follow them. All three of the Toreador warrior monks departed before long, but others among their brethren would spend years seeing the influence of their methuselah grandmaster take root in the Latin Empire. Brother Godefroi would return to his own commandery, on the cliffs over-watching the English Channel some sixteen miles west of Caen.

Many years later his progeny, Brother Ancelin, served in a similar diplomatic role in the Fifth Cainite Crusade. He indicated that his sire was one of many of the Knights of the Sable Rose who was making his way to the Holy Land in preparation for the invasion of Egypt.

Embrace: AD 1147. Brother Godefroi was brought across on the Second Crusade, and he was still a rank fledgeling when he witnessed Angel Andrew strip his grandsire, Phillipe de Gresser, of all rank and privilege. It was at this gathering that he briefly met Sir Gunthar.

Lineage: Brother Godefroi is of the 8th generation. He is the childe of Carel van den Dreissche, childe of Phillipe de Gresser, childe of Andrew of Normandy, who does not advertise his own sire, but is known to be of the 5th generation. Andrew is the grandchilde of Arikel, the Toreador Antediluvian. 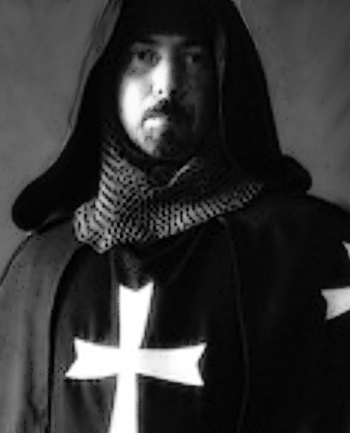