A wealthy knight from the troubled city-state of Ragusa, on the Dalmatian coast. He is a prominent member of the demon-hunting Order of Chanticleer.

A powerful, broad shouldered young knight wearing full mail, bearing red and green colours and the symbol of a white rooster on his surcoat and shield. He is handsome despite his pallour, with steady brown eyes, shoulder length mahogany hair and a full, immaculately groomed beard. He carries a lance, and sword and dagger are belted at his waist. 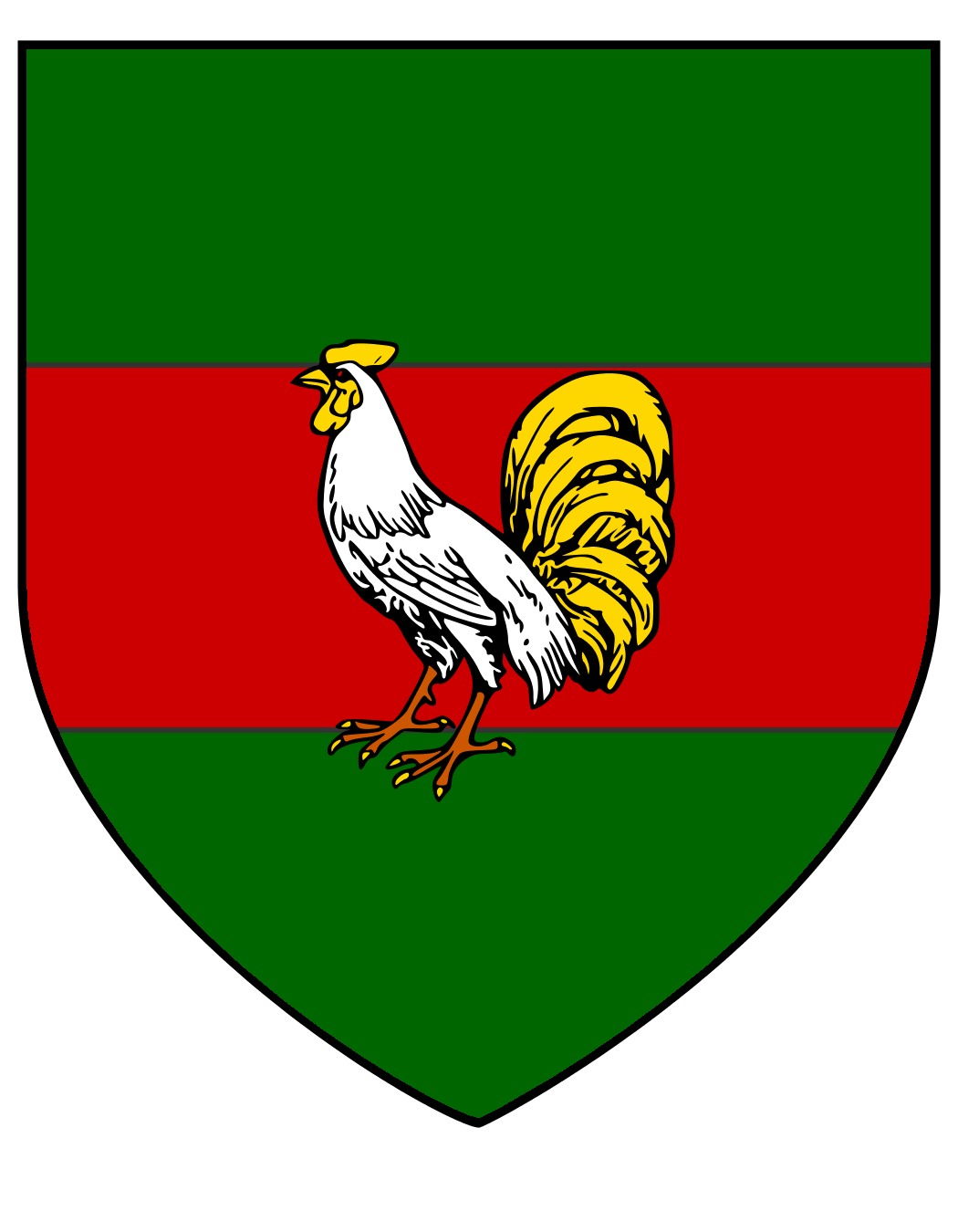 Sir Simon is a holy knight dedicated to the pursuit and destruction of diabolic powers. In company with his allies Maluziel and Argus, he was encountered by the Concord on the road to Timișoara in AD 1197. He and his companions had been tracking a demonic disturbance that had radiated from the small town of Vrsac, and their trail had led them to Sir Conrad. The Brujah had become the victim of diabolic possession, and the trio of demon hunters, initially disposed to destroying him, seemed to find his nobility of spirit compelling enough to seek another way. Unable to help him immediately, they instead settled on seeking an exorcism for him. Binding the demon with powerful wards, they transported the torpid knight hundreds of miles to Argus’ teacher in Portugal, where Sir Conrad was ultimately healed of his affliction. He would join Maluziel, Argus and Sir Simon on their hunts for a number of years, gaining valuable experience and fast friends in the process.

Some years later, he would recount the tale of the three demon-hunters to his coterie-mates among the Concord.

Simon hails from dual glories, being a scion of the House of Benessa and also a descendant of the powerful Toreador methuselah known as Angel Andrew. The Benessa family are a prestigious line, one of the oldest aristocratic families of the city-state of Ragusa (also known as Dubrovnik in the tongue of the Croats). They have long served a prominent role in the defence of the city, guarding the eastern roads of the duchy against raids by its neighbours. As a youth, Simon stood out among his peers, and quickly made a name for himself as both faithful and skilled. As a young man, he earned his spurs protecting the city against Dalmatian pirates and Croatian bandits, and some thought him a natural choice for the captain of the Ducal Guard. His talents earned the admiration and then the offer of immortality from a Toreador by the name of Phillipe of Gresser, a visiting patrons of the Hospitallers. The young knight continued his masquerade, giving up his future in the wealthy city-state to follow his sire into holy orders.

Alas, Simon cannot claim honour from the line of Andrew. His sire was once the favoured progeny of the methuselah, entrusted with handling the business of the nascent Order of the Sable Rose within the German division of the Second Crusade, while Andrew himself applied his influence directly among the French. To this purpose, he formed a partnership with the Ventrue Sir Guy of Provence and later the Saxon Sir Gunthar of Saint Wolfgang. Unfortunately, despite his considerable talents Phillipe failed to influence the impetuous course of either the German King, Conrad, nor his equally headstrong nephew, Duke Frederick. After the embarrassing and disastrous failure of King Conrad’s march across Anatolia, Phillipe was drawn to account once he reached Jerusalem. After a farce of a trial, he was spurned and cast out by his furious sire. Phillipe of Gresser was stripped of his rank and his arms, and cast out the Dung Gate to find whatever shameful end awaited him. He has not been seen in either the courts of Europe or the Holy Land ever since (although Simon has indicated that they have inconstant contact).

Simon himself had spent many months in the entourage of his exemplary grand-sire, basking in the radiance of his charisma and godliness. He had heard of the failures besetting the Germans, and knew of Andrew’s anger, but had little understanding of just what the result might be. Watching from the throng, he was stunned as the trial progressed. The brutal dressing down of Phillipe rocked the neonate to his core, and he mourned his inability ameliorate the injustice done his beloved sire. In the coming nights he was further gutted to discover that his sire’s disgrace was also considered his own. Not so much stripped of his rank among the Order of the Sable Rose, he was simply ignored and ostracised to the point where he had no choice but to withdraw from the crusade.

Listless, he wended his way back towards Ragusa, spending many years in the western provinces of the Byzantine Empire. The betrayal of the seemingly saintly and infallible Angel Andrew, the injustices done his own right-minded sire, the hypocrisy of crusade, and the betrayal of the Order of the Sable Rose weighed heavily upon the young Cainite. Near the city of Durazzo in 1161 he encountered Maluziel and Argus on one of their hunts, and saw a simple and pure purpose to their quest. Here was true evil, a corruption of God’s purpose, and these two Cainites existed to combat it. Inspired for the first time in many years, he immediately offered his services and comported himself well in the conflict against a cell of Baali that had corrupted a monastery near the port city. Impressed by his talents and rediscovered energy, the two elders offered him a place in their group.

In the decades since, the young Toreador has worked to see the star of the House of Benessa rise, using their silver and influence to support the coterie’s efforts. Despite his blackened reputation, his actions eventually gained him admission to the Toreador chivalric order known as the Knights of Chanticleer, and he has become a leader among them. His small castle is one of their easternmost outposts, used to coordinate activities on the Adriatic and throughout the Kingdom of Croatia. There is usually at least one of his brothers in temporary residence, and as many as a dozen mortal agents taking shelter during the course of their courier duties. Sir Simon is rarely at his keep himself, for he and his fellows travel the lands of the Mediterranean, following this lead or that in hopes of further rooting out the infernal. Their constant travel also does much to keep Maluziel a few steps ahead of the Tremere agents that are surely hunting him.

In addition to his two extraordinarily potent elder companions, Sir Simon travels with over twenty experienced men-at-arms, support staff and loyal ghouls, all competently led by the redoubtable Captain Walderan of Burgundy, a ferocious soldier and ghoul who long served Phillipe de Gresser.

Lineage: Childe of Philip de Gresser (d?), childe of “Angel Andrew” of Normandy; further lineage is unknown but Simon is known to be of the 7th generation. Simon has done much to restore the bloodline’s tarnished honour, but the influence of Andrew within the clan is profound, and many Toreador elders give Simon little credit. Indeed, it is a testament to the virtue of the Order of Chanticleer (or perhaps their growing rivalry with the Sable Rose) that they hold no prejudice against the promising ancilla. 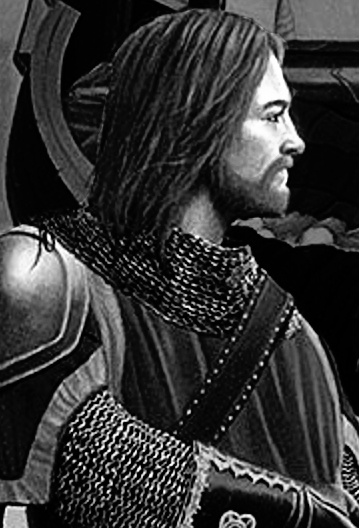