A talented knight of Blood determined to bring justice to the memory of his grandsire by slaying his consanguineous uncle, Hrothulf. His failure cost him his unlife.

A dashing figure on his black destrier, shining mail, and silken red and white surcoat, this knight made quite the initial impression as he rushed into battle at Tihuta Pass. His mail was the finest that silver could buy, reinforced by vambraces, greaves, and gorget, and his sword and dagger were a masterful fusion of form and function. Once he showed his face to challenge his consanguineous uncle, they found the tall knight to appear as a youthful German man, clean-shaven, with his black hair cut short to accommodate his coif and helmet. He was adjudged handsome, and quite charismatic in an earnest, direct sort of way. 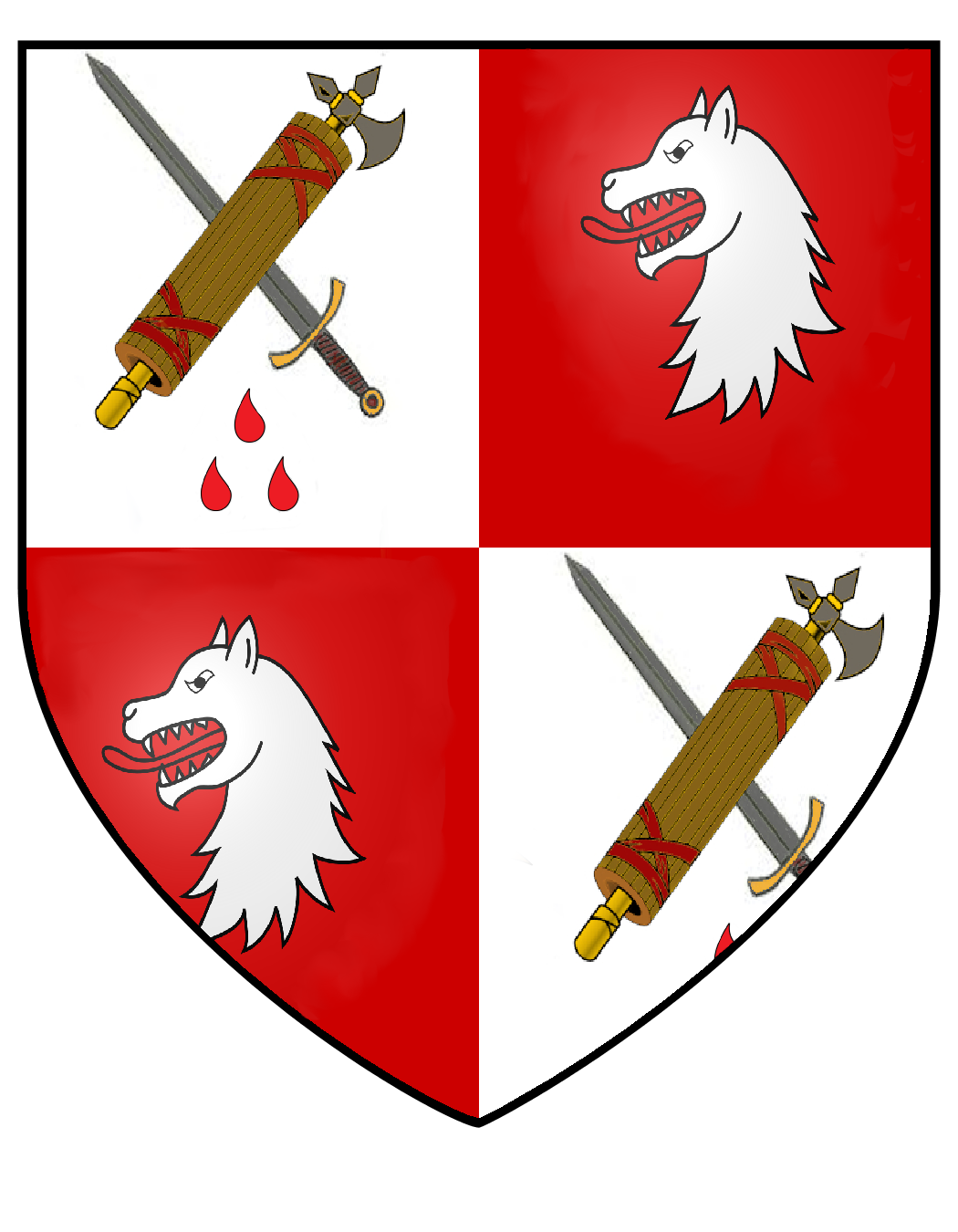 The coat of arms of Walther Ritter von Windisch-Gräz. The crossed sword and facses and the droplets of blood signified his membership in the Ventrue Order of Blood, while the white wolf on a red field denoted the arms of his mortal kin, who have grown wealthy and influential as ministerialis knights in service to the Patriarch of Aquileia.

This dashing Knight of the Blood was encountered very briefly by the formative Concord during their construction project in the Tihuta Pass. Along with his companions Virgilio of Cannobio and Brother Garnier of Cambrai as well as their small army of followers, he drove the Ventrue fugitives Siegfried and Hrothulf from their haven in the settlement of Regun, near Bistritz, and pursued them into the pass. When one of their horses came up lame, the two elder Ventrue decided to remain behind and make a stand so their mortal retainers and herd stood a chance of escape. Initially sympathetic to their plight and their courage, the Concord were compelled to assist the Knights of the Blood instead by their ally, Alaric of the Templars, who noted Garnier’s own surcoat and shield from their vantage.

The resulting battle was a disaster for the Order of the Blood and the Concord as Hrothulf and Siegfried, both many centuries older than their foes, demonstrated the monstrous damage of which elder warriors are capable. None of the mortal retainers of the order lasted more than a few seconds, and Garnier was the first of his Cainite companions to fall. His face cleaved into a ruin, he wasn’t slain outright, but instead fell into torpor. Walther and Virgilio were not so lucky.

The ancilla challenged the elder Hrothulf with a mighty shout, then spat out the words: “Uncle! I am Walther Ritter von Windisch-Gräz! Childe of Gracis Nostinus Basso and grandchilde of the great Titus Marius Capito, whom you foully murdered. I name you kinslayer and diablerist! Clan Ventrue has sentenced you to the Final Death, and you shall meet your end at my hands.” Sure of his purpose, he then saluted the elder with his blade and readied himself to attack.

In response, Hrothulf spat on the snow at Sir Walther’s feet. “Your sire is a useless coward of a pig, outdone only by Marius, who was the filthiest coward of a pig spawned by the most wretched race to ever crawl upon the earth. If his ashes were here, I would not have enough spit for them. Come then. And die.”

Furious at the Dane’s rejoinder, Sir Walther’s caution was forgotten and he rushed his consanguineous uncle. The exchange was pitifully short, despite the knight’s obvious skill, and within a double-handful of seconds he fell to the snow, disarmed and decapitated. Hrothulf spared the already mouldering corpse a hard, steady look before turning his attention to rescuing his friend Siegfried from the dangerous Sir Virgilio.

The fugitive elders were soon victorious, and after briefly making peace with the formative Concord, they took some of their enemies horses and supplies then made for the north.

When Brother Garnier awoke from torpor, he was distressed to discover the fate of his companions. During his recovery and the search for Sir Virgilio’s remains, the Templar spoke a little of the Order of Blood and of his fallen friends. Walther, it would seem, had trained almost the entirety of his fifty-three year undead existence to meet the dreaded Hrothulf in battle. He was a profoundly able combatant, easily the better of Garnier himself and close to Virgilio in skill. It was sad then, that he had gone to the Final Death so uselessly against his consanguineous uncle.

He would go on to say that it was the dogged Walther who, after many years of investigation, had discovered the hiding place of Hrothulf and Siegfried in distant Transylvania. He had petitioned their order for the mission, and no fewer than six of the Knights of the Blood had set out from the castle of Cannobio to hunt them down. It said much for the strength of the two elders that such a potent coterie had failed in their task, and even more that warriors of Walther and Virgilio’s ability were vanquished so easily.

Fortunately, the knight-commander’s torpid form was recovered from a deep pool at the base of the cliff from which Hrothulf had hurled him. Garnier soon wished the friendly Concord well, took Virgilio’s mangled body and Walther’s remains, and returned to the West to report their failure.

Years later, the Concord and the Ashen band would meet the late Sir Walther’s older consanguineous brother on the Fifth Cainite Crusade. Upon making their acquaintance, Rudolph Nostinus appeared to connect the Concord to the tale of Brother Garnier and he thanked them for their kindness to the ally of his late brother-in-blood. He further recognised that his bloodline owed them a debt for their assistance to the ill-fated Walther that night at Tihuta, and proferred his friendship to them. He would go on to assist the Ashen Band a number of times during the pilgrimage.

Lineage: Sir Walther was of the 9th generation. He was the childe of Gracis Nostinus Basso, elder and prince of Gräz, who was childe of Titus Marius Capito (d), a noted power in the later centuries of the Roman Empire until his diablerie at the fangs of Hrothulf. Marius was the childe of Statia Curia Gurges (d?), a manipulative and venal Cainite who was active in Latium from the middle of the 6th century BC until the reign of Marcus Aurelius. She has not been reliably seen in more than a millenium. Statia was the childe of Gaius Menenius Lanatus (d), a noted warrior and leader who was slain by the Brujah in the terrifying Battle for Carthage in 146 BC. He was known to be the childe of the ancient known as Mithras, who even now reigns as the Monarch of the Baronies of Avalon. Mithras is believed to be the childe of Ventrue, although others claim his sire is the ancient scholar and traveller known as Veddartha. Much confusion results as to whether Veddartha was a name used by the progenitor, or whether it is a name taken by one of his progeny in his honour. If the latter, it would seem that the legendary Mithras took the Heart’s Blood of a 4th generation vampire in the shadowed and distant recesses of the past. 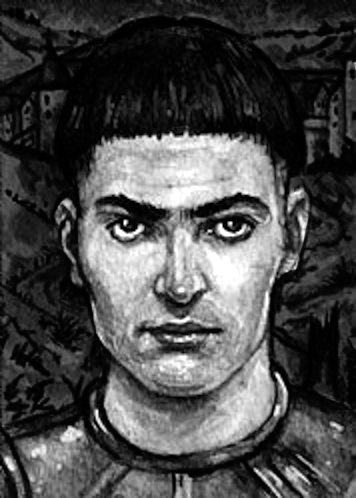