A Feral neonate of the Gangrel, Sobeska Kruty (the Cruel in Serbian) is an audacious and combative soul who wanders the lands of Serbia and Cumania.

With her tawny hair, tufted ears, slitted eyes and flattened nose, this Cainite looks like a cross between a monstrous cat and a young girl. Her smile is a maw of sharp, crooked teeth in addition to her fangs, and there is a playful, dangerous air about her. She wears cured hide and layers of leather, and is armed with a hand axe in addition to the knife sheathed at her belt.

It would appear that Sobeska is much wilder than her sire, Zivak, as the marks of the Beast are unusually strong on her for one so young. Sobeska is also quite over-confident, a flaw which has caused her some strife in the past. She attended the Gangrel Gather in the mountains north of Bistritz, where she sought to make a name for herself, defeating Lukasz, the strongest in Mitru’s pack after the Archer himself, before making an attempt to leap far ahead in the pack order by challenging Tiberiu, an ancilla many years her senior. She nearly defeated him too, before Tiberiu channelled his Beast and viciously tore into her. Wounded, chagrined and chastened, she accepted her sire’s rueful rebuke with poor grace and sulked for much of the rest of the Gather, although she did enthusiastically take part in the failed Revel against Durga Syn and Vassily Taltos.

At the time of the Gather, Sobeska is a scout in the pay of the Brujah of Timișoara. She had a reputation for knowing the trails in the east of that region better than any other, and also for the zeal with which she attacked Árpád interlopers. Indeed, she became known for her cruelty and creativity in hunting both the Ventrue as well the mortals in their service.

Many years later, she and her sire were among the Gangrel walkers on the via bestiae who rallied to the banners of the Cuman warlord known as Kordönül. At a Gather near the ruined and savaged town of Ploiești, also attended by Svenin the Tall, she expressed her hopes that the Cuman hordes would tear down the walls of Kronstadt, butcher the Burzenlanders, and send Jürgen the Sword-bearer and his minions to Hell. Like his other supporters, Sobeska returned to her wanderings after Kordönül vanished late in the autumn of 1214.

Lineage: Childe of Zivak the Wolf-Killer, childe of Tohumir the Wend, childe of Blazej the Bloody (d); of the line of Velatorix the Averni (d) and Burrukam the Stranger, who was the childe of Ennoia. Sobeska counts herself as belonging to the 11th generation.

Sobeska’s Boast (as of 1214): “Sobeska am I, called the cruel. I am daughter to Zivak the Wolf-Killer, of the people of Velatorix the Averni. We are the children of the Stranger. Twenty-two winters have passed since I was given the Blood. The best scout of the Brujah Warlord, Dominic, was I, and I am mistress of all the trails between the Balkans and the Carpathians. None know them better. Five Cainites of the Árpád and four of the Voivodate have I slain with my own claws, and many knights and warriors too.” 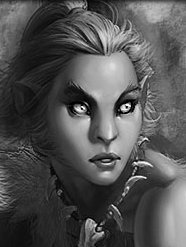