The Seneschal of Buda-Pest; a kind, romantic, and knowledgeable member of the Clan of the Rose, he is the most frequent moral sounding board for Vencel's intrigues.

A soft, aging man dressed informally but in clothes of a fine and stylish Italian cut. His skin retains much of its mortal colour and his blue eyes are warm and friendly. There is a gentle way about him, though he is armed with a dagger.

Originally of Prague, Soltan is a very widely travelled ancilla who is renowned for his taste and skill in matters of architecture, trade, and painting. He also knows much of the quadrivium, as well as history and of matters of law; enjoying lengthy discussions on these matters with any who would suffer them. Some have been known to complain that Soltan is overfond of the sound of his own voice, and that he would display more wisdom if he could learn to listen to others instead of talking so much. Prince Vencel, however, will not hear a harsh word against his friend and subordinate.

Soltan the Wise settled in Buda-Pest in the fourth decade of the 12th century and has ably served the Ventrue Paladin as seneschal since AD 1149. Prior to his arrival, he spent much time in Florence and before that, Constantinople. Indeed, Soltan has been known to wax lyrical for hours on the virtues of the Dream of Constantinople and sometimes slips into tedious melancholy over the unknown reason that he was forced to leave “paradise.” He has worked hard to make Buda-Pest the “Pearl of the Danube”, and Prince Vencel appreciates his efforts. Indeed, none possess more status and influence over Rikard and Bulcsú in Buda-Pest than Soltan the Wise. During his brief fosterage under the guidance of the prince, the young Ventrue Ulrich von Wettin had cause to speak with him often, for Soltan’s education and penchant for knowledgeable discourse matched his own proclivities. He found the Toreador’s capacity to match the intrigues of the Cainites to the course of mortal history was most educational.

Lineage: Childe of Adamik of Bohemia, childe of Eudokias (d), childe of Anthemios of Tralles, childe of Michael (d), childe of Arikel. Soltan hails from a noble bloodline of the Toreador, and as such he carries considerable status. He is of the 7th generation. 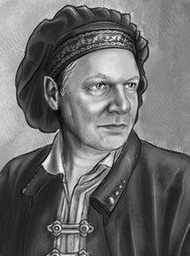