An influential Toreador from Raidestos, this ancilla is a noted merchant in addition to being famed among the clan as a painter of icons and mosaics. He is one of Petronius' more capable supporters.

A Romaioi nobleman in his middle years, with salt and pepper in his stylishly trimmed beard and long hair. He is handsome in a stiff kind of way, his intelligent brown eyes and tall, square frame lending him a sagely, dignified air. He wears the finest in damask and silk robes, and the slender dagger worn on his jewelled belt looks more ornamental than functional.

The Concord met Stephen Cerularius in the weeks after conclusion of the First Siege of Constantinople in 1203. It was Lotario who brought him to their attention as the competent, intelligent, and wealthy linchpin to the movement of the Reformed Michaelites. As a merchant with access to many trade networks throughout the Aegean, the Black Sea, and the eastern Mediterranean, his advice was sought as to how the ailing Byzantine Empire could pay the enormous debt owed to the Fourth Crusade by the newly crowned emperor, Alexius IV Angelus.

They found Stephen to be everything that Lotario suggested that he might be. Calm logic wedded to idealism and aesthetic sensibility, the elder offered them an understanding concerning the reasons that the coffers of the usually prosperous empire were empty, and also some helpful suggestions as to how gold and silver might be raised by the new emperor and his “Latin friends.” Further discussion yielded the fact that Stephen was by far the most wealthy of the Reformed Michaelites, and indeed the entirety of his own coffers could have gone a significant way towards satisfying the debt owed to Venice by the crusaders. Further, Stephen made it clear that if perhaps a dozen of the wealthiest Cainites in Constantinople alone, let alone throughout the wider empire, were willing to part with a significant amount of their treasure, not only would the debt be banished, but the financial difficulties of the empire could be set to rights.

Stephen then explained ruefully how unlikely that scenario actually was, for the Children of Caine are nothing if not paranoid, covetous, and treacherous. Any obvious generosity on his part would at best suffer scorn from the others, and at worst they would take advantage of his financial weakness to do him harm. The trick then, he explained carefully, was to make such donations quietly and through proxies engaging proxies, and to convince others that such could be done in the charged political climate of the near-occupation of the Fourth Crusade. Over the following months, the Concord discovered that this was indeed Stephen’s approach, and that he had been about his business for some time before he had discussed the matter with them.

He was not without his own distractions though, for they soon established the link between he and John, another Michaelite of their earlier acquaintance who existed in a diminished, drug-addled state in the thrall of the Children of Judas. In discussions with the elder, Lotario, Iulia, and Maude discovered that Stephen was John’s grandfather, eight times removed, and he had watched over his descendants carefully in order to look after their interests and cultivate their talents. John was not always such a broken creature, Stephen explained with great sadness. He had watched over John from afar while the lad was yet mortal, and his artistic temperament and gentle nature had entranced Stephen. He followed the young man’s work avidly, supporting him as a patron to bring out the best in him.

Eventually, however, it became clear that John was sick. The best physicians that Stephen could find examined him and told the vampire that the young man had a malignant swelling in his belly. The tumour would kill him sooner rather than later, and Stephen could not bear seeing it sap his energy and steal his spirit. The spectre of death had wormed its way into the young man’s soul, and he was already becoming tired and maudlin with thoughts of mortality. With the permission of his elder sire, Stephen revealed his true nature to his descendant and offered him his Blood. John became Stephen’s ghoul.

For years, the Blood of Caine seemed to hold the disease at bay, but eventually, the wasting sickness advanced to the point where death was certain. Once more, permission was asked and granted, so Stephen offered to bring John across into undeath. Terrified of dying, he agreed, and John became a Toreador. For many years he laboured at his craft, becoming a masterful painter and the pride of the Provincial Family of Drosinosian Michaelites of Raidestos. He seemed to remain squeamish about hunting, however, because the sound of the weakening pulse of his victims haunted the young vampire with the memory of his own slide into oblivion. Over many years, Stephen worked to rid his progeny of this fear, and believed that he had succeeded. Indeed, he had succeeded only too well.

Eventually, word reached the capital concerning John’s skill, and an invitation arrived for him to journey to the Queen of Cities and display his abilities for the Michaelites there. Proud of his progeny, Stephen bade him goodbye and released him at long last. In 1160, John arrived at Constantinople and immediately entered the ranks of Michael’s own Family. He fit right in, and was a welcome addition under the patronage of Pakourianis, the Muse of Painting. Indeed his frescoes decorate a number of palaces and public buildings, the most notable among them at Blachernae itself.

Gradually, however, John lost his passion for his work. Instead, he became enamoured of the thrill of hunting those whose faculties had been diminished by the deadening effect of hashish and alcohol, for the pull of oblivion enticed him forward. He would become lost in their drifting vitae, adrift in the dreaminess of their slowing pulse, and too often he drank too deeply for too long. People died, and his humanity began to erode along with them. The Children of Judas saw an opening, and cultivated his vice. He still wrote home to his beloved sire, lying to him about his progress and assuring him of his health, but by the 1180s, he had thoroughly lost his way; his will given freely to the Settites in return for the addled vitae and the promise of oblivion that they gave him.

And by 1196, when the formative Concord first met him, the man who was John Cerularius had very nearly vanished altogether.

The following year, Stephen arrived in the capital at the invitation of Petronius. He found his beloved childe and descendant to be little more than a mockery of his former greatness and gentility. Close to the Beast, and too addled by drug-laced blood and madness, he barely recognised his sire and when he did, he fled in shame.

Patiently, Stephen set to the task of recovering the soul of his progeny. In order to show John that hope was not lost, he helped the Arbiter establish the Reformed Michaelite faction and backed their works with his own extraordinary fortune. They laboured for years to reclaim their brothers and sisters and raise them back up from the depths to which they had fallen, and a number of them did indeed find their strength once again.

John was not among them.

Despite his sire’s best hopes and ardent efforts, he was unable to pull himself back from the jaws of the Beast, his decades-long addictions, and his obsession with death. There was simply no will left in him to resist, to find his way back to hope and even a semblance of life. Stephen’s entreaties fell on deaf ears, and his hopes gradually died.

In 1204 when the walls fell and the Great Sack began, John was noted as stalking the streets, hunting, feeding, and killing in an addled craze that some reported was just a hair’s breadth away from the Wassail. When told of this, Stephen Cerularius grabbed a stake and set off into the burning city alone.

His face a mask of restrained grief, Stephen departed the city soon after the fires were extinguished, returning to Raidestos without a word to anyone.

In 1206, that beautiful port city was one of several that was taken, sacked, and ruined by the vengeful Bulgarians who had delivered defeat after defeat to the new Latin Empire. Stephen and his sire Xenos survived the loss of their home, and they appeared in Constantinople briefly, refugees bearing little more than the clothes on their backs. True to his earlier opinions on the nature of the Children of Caine, they were met with little sympathy and undue scorn from their fellow elders, most of whom sought advantage in return for their assistance. Even Anthemios, who was at that time preeminent among the remaining Michaelites, offered prestation rather than generosity.

The Drosinosians lingered for more than a year, reduced to selling their services like common neonates, before scrimping together enough to attempt a new start in the city of Thessalonica. They departed Constantinople in the spring of 1208, and Stephen has remained in his new home ever since, slowly rebuilding his fortune and his status in the new political reality of that city. Xenos did not fare so well, and he returned to the much reduced and insecure Raidestos in 1210, there to continue a relatively hardscrabble existence as he seeks to return his home of centuries to a measure of comfort and prosperity.

Embrace: In 1203, Stephen claimed to be “more or less” an elder in his own right. This meant that he had been undead for three centuries, making his Becoming in the early years of the 10th century

Lineage: Stephen is of the 7th generation. He is the childe of Xenos Drosinos, an elder of Raidestos who served as prince of that city in the 10th and 11th centuries, but he now exists in a state of semi-retirement from Cainite society. Xenos in turn is the childe of Endymion, a master sculptor of unearthly skill who served as the Michaelite Muse of Sculpture for most of the 6th, 7th, and 8th centuries before he quit the city due to the interference of his sire in his art. His whereabouts are unknown. Endymion is the childe of Michael (d), the Archangel, late Patriarch of the Dream, who was the childe of Arikel, the Toreador Antediluvian. 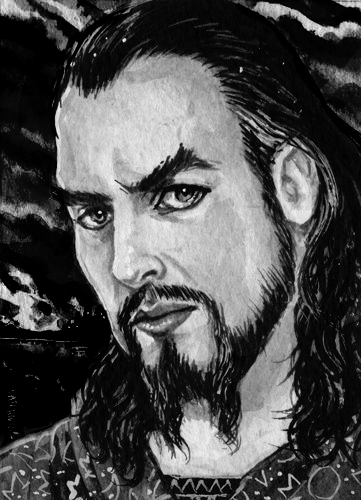