The progeny of Bernhard von Billung, the Red Wolf, is an ally of the coterie known as the 'Concord of Ashes'. Svenin the Tall is known mercenary and Crusader.

Svenin is an older man, Embraced in his late 30s. He has, as a result of his career as a mercenary soldier while a mortal, many scars and claims that his bones creak and scars ache when the weather changes. Svenin “lives large”, having a Viking’s zest for life and love of conflict. Svenin is tall and broad, significantly larger than most men. He has a fierce but handsome smile that shows through a long blonde beard. His beard, together with his shoulder-length ash-blonde hair, is decorated with silver and bronze jewellery. He wears a finely wrought mail coat over padded gambeson and under furs worn as an overcoat. He wears ornate rune-carved bronze and steel arm-guards and greaves, with well-worn hard leather boots. Under his armour he sports several armbands and torcs of silver and gold – loot taken from the sack of Constantinople. He carries a large yew bow, unstrung, and wears a long axe on his back. He carries two long knives and a quiver of arrows on his belt. Ashlar, a savage looking mastiff with light fur and a black muzzle, is always at his side. Svenin’s only ‘Marks of Frenzy’ is a pelt of fur that covers the front and back of his torso; a similar marking to his sire and grandsire.

Svenin is a Danish mercenary soldier Embraced by Bernhard von Billung in the aftermath of the Second Crusade. Svenin was one of Hakkon’s mercenaries with a knack for languages, a good thinker as well as a fighter who had impressed both Hakkon and the handsome German-Saxon knight, Ritter Gunthar the Red Wolf (aka Bernhard von Billung).

By the mid-1150’s, Svenin was dying of a wasting disease and wished for life. Hakkon and Bernhard offered him the choice and he opted for the Embrace; as Hakkon had no desire for a childe, Bernhard Embraced the mercenary, hoping in part to redeem his mistake with Jana, his earlier childe. Svenin took to the Blood well, and the three Gangrel lived and fought and talked for five years. During this time Svenin learned his letters from Bernhard, as well as the basic principles of his new existence.

When the Saxon Gangrel went to leave the Holy Land to answer the call of his sire, Lucien the Roman, Svenin was given the choice of who to follow – Bernhard or Hakkon; the path of the knight or that of the mercenary. Svenin chose to stay with Hakkon, for the Norseman’s verve was more in fitting with Svenin’s own. Bernhard left his childe, with his blessing, in Hakkon’s care, and set off to return to Lucien. Bernhard promised to return.

Svenin’s love of learning has put him at odds with Hakkon, but the point of difference between the two has not been a dividing point. Many times the two fought together, and many times apart – although never on differing sides of a conflict. Hakkon even took Svenin to his first Gather and introduced the pup, watching with enjoyment as the young Gangrel took his beatings with honour, learned his place, and then bettered that place at his next Gather through wit as well as strength. Having been Embraced in the Levant and trained by one of the Einherjar , he understands the ways of the Muslim Wah’Sheen and the Scandinavian aftergangers more than those of his European clan-mates, but he has met enough of them in Gathers and crusades to have a casual understanding of their ways.

Svenin is not a loyalist to his bloodline, but neither is he their enemy. He is proud to have such a mighty sire as the Red Wolf, and grandsire as the Roman – when challenged at Gathers he has stood proud – but he is not the same as them, nor are they the same as he; and the distinction has been noted which has allowed Svenin to avoid some of the stink that comes within the Gangrel clan from the acts of his sire and grandsire.

When Bernhard and Lucien returned to Outremer, Svenin greeted his sire with joy and his grandsire with some trepidation – he had heard the legends of the ancient Roman. With a pecking order clearly established – with Svenin at the bottom – the mercenary had the sense to shut up and learn. This good sense, and his clear desire for knowledge, impressed Bernhard and Lucien, but the difference in the philosophies of his lineage and his own (and Hakkon’s) meant that the coming together was always going to be short-lived. For his part, Lucien was troubled that his beloved childe’s second choice for Embrace was again unwise; for while Lucien and Bernhard would fight as protectors of civilisation, it seemed clear Svenin did not hold to those values. Svenin paid little attention to the muffled disappointment of the ancient Roman, feeling honour enough in that his sire, Bernhard, judged Svenin well, proud that his childe had grown strong, even if disappointed they would not mirror the bond Bernhard had with his own sire. When the four Gangrel parted ways, there were no hard feelings; neither allies nor enemies; kin, but not family.

Over the decades, Svenin has built up a mercenary band of his own to aid him. The small mercenary company is called ‘The Black Lions’, and they use the archers-protected-by-spear-and-shield tactic used so successfully during the Third Crusade. The leadership of this company is conducted by his ghoul retainer, Odda, and Svenin is content for it to be so; when Svenin talks, Odda listens, but otherwise Svenin lets Odda make the decisions.

While archery and soldiering is Svenin’s trade, he enjoys storytelling, conjuring tricks and wood-carving to keep himself and others entertained. He often uses these methods to help his hunting, using his skills to get close to his prey.

Svenin follows the Road of the Slain, as taught to him by Hakkon. Svenin, like Hakkon, is a big man with a big passion for life’s fun. Svenin is a mercenary and fights for pay, glory and battle. Tomorrow is a pointless concept for him, and he enjoys living in an eternal Now. One day, true, he will die, and by then it is his hope to have earned enough renown through deeds to have an immortal name, but other than this philosophy he has no long-term plans. “I live, I slay, I burn with life, and I am content.”

Lineage: Childe of Bernhard von Billung, Childe of Lucien the Roman, Childe of the Savage; further lineage is unknown. 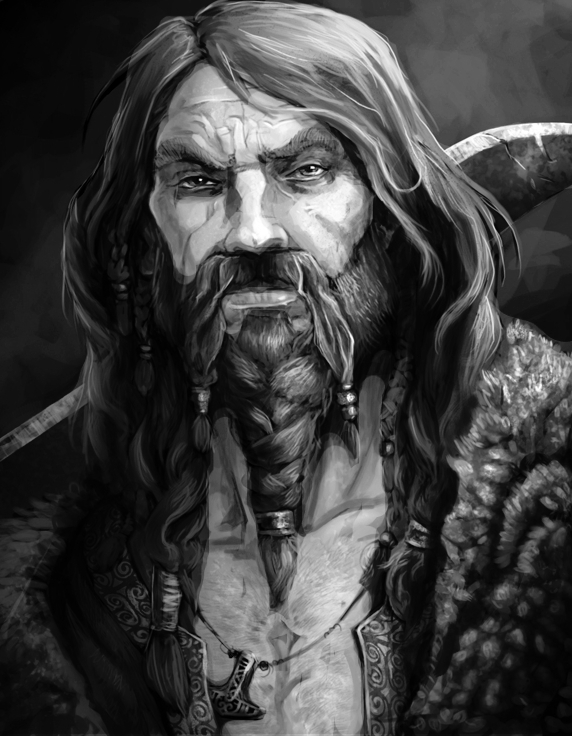