This Byzantine elder was the the leader of the Draconians, a secular subsect of the Obertus Order, as well as the Tzimisce Quaesitor of Byzantium. He fled the city during the Great Sack, and is thought to be somewhere in Greater Hungary.

This man is strong and hale, with the aspect of a natural ruler. He has a pale olive complexion, dark brown hair, and confident, compelling brown eyes. Although dressed in the finery of a Byzantine aristocrat and dripping with jewels, he looks like a warrior, and wears a sword and dagger at his belt with practiced ease.

It is known that Symeon was a mortal favourite of the late methuselah Antonius, who raised the boy from birth to be the perfect Ventrue. Gesu’s Embrace of Symeon in AD 703, just two years after his own disastrous Becoming at the fangs of the Dracon, forever shattered any hope of unity among the Trinity. Some years later it also indirectly led to the destruction of Antonius himself (sanctioned by Michael and the Dracon) at the hands of his own childe, Caius.

Symeon was one of the most powerful Cainites in a city of powerful Cainites. He and Gesu, both his sire and his brother, shared responsibility for the Obertus Order since their master, the methuselah known as the Dracon, deserted the city centuries ago. As his brother-sire delved ever deeper into spiritual esotericism, Lord Symeon instead placed his interest in administrating the secular holdings of the Order with brilliant efficiency and political skill, easily matching the machinations of any number of Antonian intriguers or Lexor senators. Many of these worthies were humbled by the sure knowledge that Symeon could do several of their collective jobs by himself, and far better as well.

The internal politics of the Byzantine Tzimisce were mysterious, even to their fellow Trinity families. What little was known indicates that Gesu, from the Monastery of St. John Studius, was the spiritual head of the Family and also of his own Gesudian Monastic Order. He was responsible for guiding it’s philosophies and its heart, subverting the Akoimetai from the original purpose as laid down by the Dracon. Symeon, from the Church of Christ Pantokrator, was the secular head, and as such his role was to make decisions regarding more pressing matters such as politics and distribution of funds. Those monks of the Obertus who did not follow their brothers down the Gesudian path remained with Symeon, and at least in the final years before the defeat of the empire their preference was to refer to themselves as Draconians. The role of the Scion Family who served the Obertus, known as the Baron’s Gangrel, was to serve as both Symeon and Gesu’s hands and, if necessary, their claws. Thomas Feroux was awed by the latter, but he reserved his respect and admiration for former.

In addition to his duties as leader of the Draconians, Symeon was frequently ensconced in the intrigues of the Quaesitor Tribunal and the politics of Elysiums of the Great Palace. He left much of the minutiae of mundane duties of administration and mediation to a small brood of descendants. Foremost among them is his oldest survivng progeny, the brilliant Myca Vykos, who also served as his chief diplomat.

Veceslav, Iulia, Sir Gunthar, and Sir Conrad owe Lord Symeon two boons: the first for providing an introduction to the city’s secretive Assamites, and the second for providing a letter of introduction to the Baron’s Gangrel. Both introductions substantially eased the course of their investigations into the murder of Bishop Alfonzo’s childer, Juliano and Adrianna. Additionally, owing to the great assistance of Myca in their construction project at Tihuta Pass, the Concord owe Symeon and his ilk significantly more. When the Concord arrived at the Queen of Cities in company with the Fourth Cainite Crusade and Veceslav paid his respects to the Draconians, Lord Symeon made it clear that if the ancilla and his allies could succeed in averting further war, all debts owed to the Obertus Order would be considered paid. Unfortunately, this did not occur.

During the months between the first siege of the capital in 1203 and the second in 1204, his progeny, Myca, drew the conclusion that the Fourth Crusade presented an unacceptable risk to his Symeon. He surmised that his sire’s loyalty to his ungrateful brother could be his undoing. If it was likely that if the Franks breached the walls, the Cainite Crusaders would almost certainly strike at the monastery and, lost in his solopsistic meditations, Gesu would never leave it even if it meant his Final Death. Therefore, Symeon’s desire to protect his brother would almost certainly lead to his own doom, and that Myca could not countenance. Quietly, he contacted a number of allies, including the Concord, seeking to find a way to assassinate Gesu before the choice became relevant. Luckily, Symeon knew the mind of his childe, and he summoned Veceslav shortly thereafter to kill the scheme before it could even be seriously entertained.

When the walls were breached, Symeon did indeed rush to the defence of the Monastery of St. John Studius with his Draconians and his servants among the Baron’s Gangrel. They fought their way through gangs of looting crusaders and mobs of panicked Constantinopolitans, but by the time they reached it, the monastery was already in flames and he knew that his brother-sire had found the Final Death. Shocked and dejected, he allowed Myca to lead him from the city by the secret routes that his childe had long since set in place.

Rumours of them surfaced later as guests of Voivode Koban at his stronghold of the Vranca. Indeed, they would remain there for years, exchanging their learning and knowledge of the South with Koban’s understanding of the markedly more cruel and tumultuous clan politics of the North. By 1209, they had moved on from his court and made their way into Transylvania proper, heading west for the courts of Hungary and Poland. 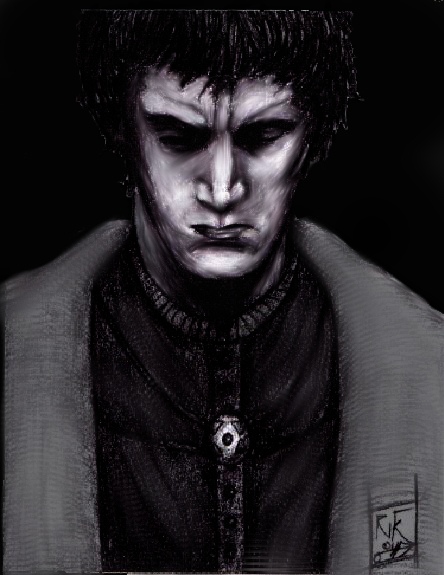