This ancilla is one of the new powers in the Lexor Brujah of the Despotate of Epirus. In keeping with the desires of his Autokrator and his brother senator, Sir Conrad of Monreal, he has allied himself with the Concord.

Theophanos is average height, has grey eyes, olive complexion and thick dark hair short cut and groomed neatly in the Byzantine style. He exudes an aura of charisma, a warm smile and is eloquent and congenial in his speech. Theophanos dresses in fashionable attire appropriate for a magistrate.

Theophanos was born to a large, wealthy family in the heart of Constantinople and gifted with a sharp tongue and keen intellect, he was and classically educated in jurisprudence, theology and commerce. He achieved a magistrate’s position in his early career and soon established his own trade network operating out of Bospora Harbour while continuing to practice law, write and tutor at the Pandidakterion.

In the years following cycles of decline in the latter part of the 12th Century, Theophanos came to the attention of the Lexor Brujah. Under Belisarius’ leadership, to check the growing trade and maritime influence of the Latins, Theophanos was given the Embrace in the formal proceedings of a Roman Senate. During the years immediately after his Embrace, he was given extensive instruction and examination by his sire, Bardas Skleros. Through him and Natalya Syvatoslav, he learned of the unique Dream of the Queen of Cities and became a devoted proponent of its ideals.

As the years passed and Theophanos understood his place in the Cainite world, he returned to greater autonomy, acting as an agent of the Lexor in the Bosporus. At the same time, his trade network saw further expansion with newfound Cainite associates.

At a time when political and civil unrest was at a fever pitch, he saw first hand the Dream teetering on the edge of destruction and sought to personally stifle Latin influence in the city and their activities throughout Marmora Bay. At times, this included compromising trade deals and cooperation with the foreigners, which lead to growing suspicion among scion families that Theophanos had turned traitor and had hedged his bets with a perceived winning side. Such slanderous notions hardly stuck and Theophanos repeatedly demonstrated his commitment to the Lexor faction and the Dream.

In the aftermath of the 1185 riots, Theophanos came under heavy scrutiny when the Eighth Council was convened because of his heavy involvement in mortal affairs and the Lexor’s chief liaison to the Narsene Lasombra. Despite his machinations in the riot escalations, decentralising his operations across the Golden Horn and seeing his uneasy alliance with Narses working for the greater good, he was acquitted of any substantial involvement.

Economically outmaneuvered and politically compromised, Theophanos began reconsolidating his power base in Thessalonika. Intent on affording newly formed Covenant of Three new staging grounds, Theophanos sowed the seeds of the renewal for the Byzantine Brujah, Nosferatu and Gangrel.

In 1198 after Pope Innocent II called for a Fourth Crusade, envoys of the Obertus Tzimisce began commissioning Theophanos’ merchant fleet to transport property from their monastery out of the city to safer havens elsewhere. In this bleak period, out of some paranoid or prophetic vision, priceless books and artefacts are smuggled away from the city. During this time Theophanos makes the first contact with the Concord, escorting Myca Vykos to his Carpathian brethren to the north.

After the Fall of Constantinople: 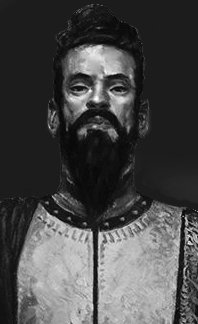