A brutal, cunning Nosferatu attached to the 4th Crusade in pursuit of blood, battle and booty. He was destroyed by the Concord in April of 1204.

Thierry usually appeared as a grizzled, sinewy soldier in his middle years, wearing battle-scarred, stained mail and leather festooned with rags of yellow and blue. A whiff of pus and rotting meat seemed to hang about the man. He seemed to be unkempt and filthy in his habits, yet he sported a light beard and a large moustache with which he appeared to take considerable pride. He eschewed a shield due to the large, two-handed battle axe that he carried in his left hand. His only other weapon was a knife, worn at his belt.

(Obviously, this is how Thierry chose to appear using his Mask of a Thousand Faces, and some believed it was the form he wore before his Embrace. His true appearance, which he revealed only when he sought to terrify others in battle or the hunt, was that of an angular, bald monster with elongated, tapered ears and long fangs. The stench of rot that followed him was explained by his skin — it was of a sickly grey hue, mottled with patches of fungus and split with pustules, boils and warts. His bloodshot, baleful eyes were disturbing enough, yet he frequently enhanced the effect by using Witness of Darkness to make them glow. Curiously, even in his true form his prodigious moustache retained its glory) 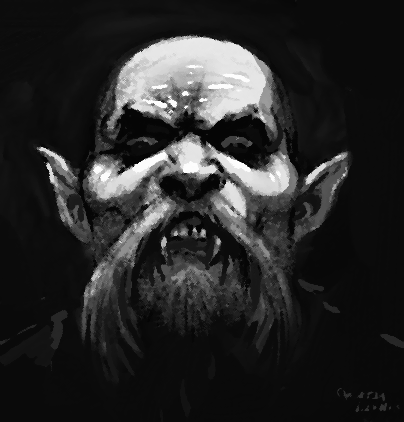 This late mercenary of the Nosferatu clan showed himself to be a villain of the lowest sort. He and his ally, Marcel, entered the service of Felix of Vaucluse and the House of Fabricius in Venice. They immediately set about enjoying themselves as enforcers for the ambitious and greedy Ventrue lord. At Zara they took part in the senseless pillage during the sack, hunting and feeding indiscriminately in the chaos. In the months thereafter, the two Low Clan sell-swords were involved in whatever nefarious activities earned Sir Felix, Roderick of Rouen, and themselves black veins in their aura- evidently the crime of diablerie must be added to the list of murder, rapine and pillage for which they were already known. And yet, as the star of Felix rose, so too did their own and Thierry and Marcel enjoyed a certain protection.

It is thought that both Cainites hailed from a small settlement somewhere in Normandy. They sometimes bragged that they fought together as mortal mercenaries in the dynastic strife between Henry II of England and his rebellious children, learning their brutal trade in the vicious infighting then besetting the Angevin empire. Whatever the truth, it is clear that however they came to be undead (and of different clans to boot) their association continued after the Embrace. They worked as mercenaries for this High Clan prince or that since the mid-1180s, and joined the Fourth Cainite Crusade purely for sport, blood, and plunder. In short, they were just the sort of scum that Felix was looking for when he sensed weakness on the part of Guy of Provence.

While they were mercenaries (they lacked the status for Felix to truly accept their fealty), and thus nominally under the command of Captain Sir Russel, it was quite clear that they were loyal to the coin and favour of the Burgundian Ventrue. Thierry and Marcel gleefully served the House of Fabricius, being in the forefront of every battle, raid and sack that the Ventrue instigated. They took all the blood, death, and silver that they could manage, yet they hungered for more. While Marcel appeared to be every bit the stupid brute, Thierry gained a reputation for being devilishly cunning and difficult to fool. He was an excellent scout, second on the Cainite Crusade only to the formidable Gangrel elder known as Rollo.

Both Thierry and Marcel were present on Felix’ ill-starred attack on the faux-treasure boat. Despite falling through Maude’s illusory deck onto the waiting blades of the Baron’s Gangrel, their ghouls, and the Scholai Guard, the veteran mercenaries quickly regrouped and fought back to back. They slew seven of their foes, including Stylio, a noted warrior among the Baron’s Gangrel, before they were confronted by the Concord in the closing moments of the ambuscade. As Maude and Lotario dealt with Marcel, only Alfonse Borgio stood between Thierry and his domitor’s exposed flank, and the loyal ghoul was hacked from collar to pelvis by one stroke of the Nosferatu’s battle-axe. He was dragged away from the melee, but quickly died moments later, bleeding out from his mortal wound. Seeing his ally fallen and the enraged coterie turning towards him, Thierry abandoned the fight and leapt eighteen feet out of the hold and into the Bosporus, escaping into the murk as his foes closed in.

Unlike a number of Felix’ dubious supporters who deserted the Ventrue after his poor showing in the attack, Thierry remained loyal to the House of Fabricius. It would seem that despite the loss of his Gangrel friend, the Nosferatu was in a stronger position than before the failed attack. If nothing else, Thierry apparently knew a lucrative patron (or mark) when he found one…

His loyalty to Felix’ coin appeared to work to Thierry’s advantage. When the Fourth Crusade broke through the walls and commenced the sack of Constantinople in April of 1204, he was included among the retainers of the House of Fabricius. With his good service, his share of the loot promised to be considerable. When Leon Boumbalis was subdued after a chance encounter, Thierry was also permitted to take the heart’s blood of the Baron’s Gangrel. The strengthened potency of his blood held him in good stead when the House of Fabricius intercepted and overpowered Sir Conrad de Monreal at the Church of Eirene later that night.

Unfortunately, flush with the euphoria of the act of diablerie and his victory over the Lexor senator, the Nosferatu was less than his usual alert self when the Concord ambushed them less than an hour later. Thierry was struck by a grenade of Greek Fire hurled by Iulia, the prince of Weissenburg and engulfed, he entered Rötschreck and, mindlessly scrabbling for water, went to the Final Death moments later.

Lineage: Childe of Waldo la Batte, Childe of Benoite of Poitiers (d); his further lineage is unknown, but Waldo the Bat claims descent from Benoite, who was once noted as the Scourge of Poitiers. Benoite claimed to be of the 7th generation, which would make Thierry of the 9th. Of course, as Drenis and Lotario both detected the black veins of diablerie in his aura, and he took the heart’s blood of Leon Boumbalis, the Nosferatu was considerably stronger in the blood when he was finally destroyed. 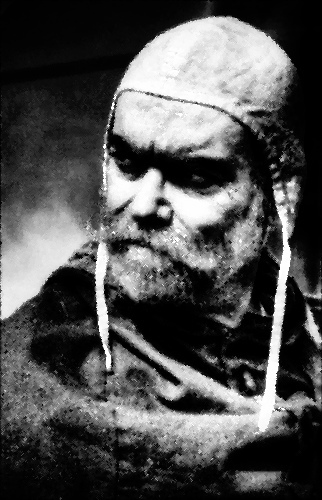