This Tzimisce ancilla is the knez of Paltar, a strong fortification that anchors the north of Koban's demesnes. In addition to this duty, he serves his sire as Warmaster of Vrancea.

A tall, agile monster, clad in scale armour in the Cuman style. His wide, flat face bears only two slits for a nose, reminding you of a snake. He has dead, emotionless eyes and his much scarred body appears to be devoid of hair except for a long top knot. A sabre, a knife, and a case holding a short bow made of horn, sinew and wood hangs from his belt. A quiver of arrows is worn at his back.

Locked in war with the forces of his master, the Concord had little opportunity to discover much regarding Timur, the vaunted Warmaster of the Vranca (also known as Vrancea), a domain taking in much of Moldavia and the northern reaches of Muntenia. He is a taciturn Cainite, finding little of interest in dueling with words when a sword serves quicker, better, and more honestly. As perhaps the eldest and certainly most monstrous of the voivode’s surviving progeny, he also supervised the ritual impalement of mortals before the castle walls of Toth. During their brief parley with Voivode Koban, Timur proved to be extremely terse in comparison to his loquacious master, spending more time watching them than speaking to them. What little they did learn of him was from his companions, and later on the field of battle.

Although he was Embraced scarcely twenty years before the turn of the 12th century, Timur remembers almost nothing of his mortal life, save that he was a Cuman chieftain of some renown, a mighty conqueror with the blood of hundreds of warriors on his hands. He has no memory of what he looked like, and now resembles a two metre tall vehicle for war and destruction that does not even vaguely resemble a Cuman. He has a noted hatred of the Boeruevi (werewolves) and has organised hunts against them throughout Vrancea in the past.

Timur is widely held to be the eldest remaining childe of Koban, at least of those in active service to their master. His predecessor as warmaster, Urguk, was slain in 1162, when the Baron’s Gangrel descended upon the voivode on the orders of Gesu, Saint of the Divinity Within. Although the attack failed to slay him, and was ordered in retaliation for attacks on the Obertus Monastery supervised by Zubor, the attack precipitated Koban’s rabid final war on the hapless abbot. Nearly fifty years later, it would also indirectly cause the voivode’s Trial by War on Boyar Bodor Toth and his people.

During that Trial by War, Timur proved to be a competent opponent against the Concord. While he was unable to effectively counter the guerilla tactics of Bernhard and Erzebet in the eastern pass, he kept a secure camp and organised counter-ambushes against their efforts in the valley proper. He was quite experienced at mixing standard battle tactics with the spirit magics and allies of his sire, and these unorthodox tactics were used to dramatic effect by disabling the castle’s ballista, many of their crossbows and even several suits of mail right on the verge of an assault on the walls.

Fortunately for the coterie, Timur was often over-ruled by his more audacious and impulsive master, who saw more value in following his own twisted arcane narrative rather than trusting the tried and true instincts of his warmaster. The army of the voivode made three assaults on the walls of Castle Toth. The first was at midday after his arrival, and was merely a probe. The second was a more organised assault the next evening, backed by Koban’s spirit allies. The last was the same night during the Witching Hour as a fierce blizzard engulfed the valley, and this all-out attack very nearly destroyed all resistance in the castle.

While Koban himself led his vozhd and the main body of the army against the gatehouse, Timur led a crack squad of Bratovitch revenants on an attack on the eastern wall of the castle. They moved with considerable stealth, but Timur’s plan required that they be seen anyway, for this too was a feign designed to draw off the Cainite defenders from the west wall. Two terrible Kupala spirits then materialised among the thinned defenders, slaying many as they swept towards the gatehouse. Only a valiant interception by Iulia, George, Agmundir, and several of Gortav’s mercenaries kept the monsters at bay long enough for the castle to hold.

Timur himself was frustrated in his attack by Bernhard and Sister Maude. The warmaster was briefly delayed by Emeric and his fellows long enough to allow the two to get into position, and then alternatively frozen by Maude and attacked by Bernhard in tandem. He did succeed in striking the Gangrel to the ground with one heavy blow of his sabre, but the knight arose in a frenzy and locked on to the Tzimisce’s leg. If not for his armour, the warmaster would have perished then and there under the fangs of his foe. The Gangrel greedily supped on his blood while the Cappadocian’s death magic kept him immobile, and Timur’s Beast arose in fright. The warmaster finally broke free of Sister Maude’s control, chose to heed the Beast and flee into the night rather than continue a futile battle against the two of them. He was seen fleeing north into the foothills rather than east towards the safety of Koban’s forces.

Rather than pursue immediately Maude and Bernhard were forced to bring their attention to bear on the main battle. Half-an-hour later, with Koban in full retreat and his second vozhd dead in the castle bailey, Bernhard took off into the blizzard after Timur. He claimed that the warmaster was too dangerous, and could not be allowed to return to Vrancea lest Toth suffer a worse attack the following season.

The hunt was on.

Over the next few hours Bernhard tracked the warmaster through the blizzard, using his wolf senses and Auspex to follow the faint trail of the Tzimisce. He found that the fleeing warrior, struggling for sustenance and racing the dawn, had gradually found his bearings and was angling for Koban’s retreating army. The Gangrel had time to intercept him, and he barred the way of the warmaster. He desired to parley with Timur, and learn something of this kindred spirit before they finished the bloody business of the night.

The warmaster gave as good as he got in the verbal exchange, disheartening Bernhard with his seeming familiarity with the sorrows and worries that plagued the Gangrel’s heart. It was perhaps this that disrupted the knight’s concentration when battle was rejoined, and Timur had the advantage. In a short, brutal exchange, the warmaster cut down the prince of Kronstadt, then dragged the torpid body of Bernhard to Voivode Koban’s camp, and a fate worse than Final Death…

Rushing to the scene in hopes of a last-ditch rescue, the last sight that Sister Maude, had of her coterie mate was the Gangrel being impaled and held aloft as a grisly banner for the retreating army. Timur the Warmaster walked next to his sire’s vozhd-throne, ever the obedient monster.

None among the Concord have encountered him in the many years since the failed siege of Toth. Word has it that the conflict between Koban and Noriz has heated up in recent years and if so, Timur must be busy indeed fighting off the legions of the Corruptor. It is also thought that the feared Cuman warmaster known as Kordönül spent some time fighting in company with Timur, and in their shared campaigns the two must have shared countless tricks of their bloody trade. If this is indeed the case, it says much for his savagery that the notoriety of the Gangrel khan has managed to exceed that of the Warmaster of the Vranca.

Lineage: Timur is of the 7th generation. He is the childe of Koban, who is the childe of Noriz (diab.); Further ancestry is unknown but the bloodline are thought to be descended from an exotic eastern lineage largely unknown to the west. 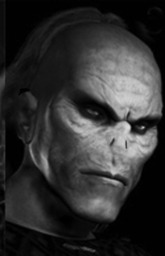