An unsettling Koldun Adept from the distant northern plains beyond the Carpathians, this Tzimisce is often the voice of reason and wisdom among the coterie known as the Northern Blood.

A strange, unsettling young woman of mixed Vlach and Rus blood. She bears many scars, and bony knobs and spurs protrude from her forehead, upper arms, hands and legs. Her right eye is a fierce grey, but her left is covered with a milky cataract and bisected by a vicious scar. She wears little other than a loin cloth, a cloak made of wolf fur, and a strange, bone-crafted breast-plate. She carries a spear, marked with runes and covered in blood.

Little is known of the formidable koldun Trandafira. She is a member of the dangerous coterie known as de Nord Sânge (the Northern Blood), which performs as a roving pack of enforcers and warriors for Voivode Mircea Dzardescu and his allies. During their troubled dealings with the Northern Blood, the coterie met Trandafira only once, but they observed her to be the voice of common sense in her coterie; her word respected by one and all of her allies. While Bogdan Basarab was the nominal leader of the Northern Blood, it was clear to the Concord that this koldun was indispensable to him.

In his later dealings with his brother, Veceslav became more familiar with the remainder of de Nord Sânge. Of them all, Trandafira struck him as the most interesting and enigmatic of his on-again, off-again rivals.

A devotee of the Old Faith, Trandafira intimately understands the role of Kupala and the other spirits of the natural world in the balance (or lack thereof) in Transylvania. Trandafira is particularly devoted to Veles, a faith that she shares with her coterie-mate Draguta. Unusual for a devotee of Veles, who tend to focus on air as their element, she favours the Earth Ways and Fire Ways in her koldunic pursuits.

Trandafira feels that any distraction from the Omen War against the Tremere is pure folly, and has said that if the war is lost, greater horrors than even the worst nightmares of the eldest of the Tzimisce might be unleashed. Her sire, Cezar, shared her views before his destruction at the hands of Visya during the incessant Trials by War that also saw the Final Death of Gerlo. She sees Visya as a madman, a fool and a betrayer of everything that the kolduns should stand for. Only her more pressing need to prosecute the greater conflict with the Tremere keeps her from bending her entire will upon his destruction.

Her presence in the coterie is contingent on her desire for revenge and justice, and because her older brother-in-blood Knez Alexandru of Botosani, has asked her to do so as repayment for a favour. Trandafira is the oldest member of the coterie, and her niche is mediator and problem-solver (the latter by virtue of her rituals).

The hatred she bears for Visya and his brood sometimes causes Trandafira to act uncharacteristically recklessly when she feels that she might be revenged for the loss of her sire and teacher. This is usually balanced by her understanding that the Omen War is more important to the survival of the Land, the clan, and her “family” (Cezar’s brood), but not always. She abided fitfully at best by the terms of the truce arranged by Veceslav Basarab, but she recognises the need for it.

Embrace: The early years of the 12th century.

Lineage: Childe of Cezar Taladescu (d); details of her further lineage is unknown save her descent from the Ancient known as Triglav the Three-Headed, who was the progeny of the Eldest. but Trandafira claims the 7th generation. 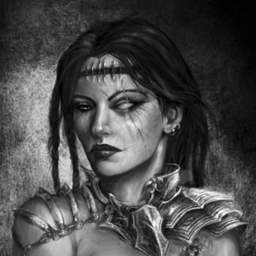