The eldest of the Baron's Gangrel, this ancilla trapped in the body of a boy on the cusp of manhood is an insolent rogue. Luckily for him, he was also undeniably effective in his role. He fled the city in 1204, and is at large in the West.

A pale, handsome boy, perhaps fourteen years of age, with longish brown hair and dark, brooding eyes. He is dressed in the dirty cast-off rags of a street urchin, and he goes barefoot, the better to navigate the twisting allies and precarious rooftops of the city. He is armed only with a simple knife.

(Expanded from the character as presented in Dark Ages Clan Novel: Malkavian).

At the time of its dissolution, Urbien was the eldest of the Baron’s Gangrel in Constantinople, being more than a century the senior of his fellow captain Justinian and Baron Thomas himself. For many of his years he existed in the capital illegally, as the Gangrel did not possess Scion status and he was not part of the Family system. Even so, like many Cainites, he existed in the underbelly of the city’s culture, far from the eyes of all but the Children of Judas and the odd slummer. For over a century Urbien lived a hand-to-mouth existence alongside his sire, Agatone, rarely staying in one haven more than a few nights in a row, and often earth-melding wherever a discrete patch of ground could be found. Their existence was meagre, but not unsatisfactory. They made many friends among the poor and desperate of the city- mortals who were just like them.

WhenBaron Thomas came along, Agatone was quick to offer her services. She saw the Baron’s Gangrel as a chance to finally be an active part of the Dream and, to be honest only with herself, the chance to find some stability and comfort. Unlike her childe, the Beast gnawed nightly at Agatone’s soul, and she thought that contributing in some positive way might help her hold on to her dwindling humanitas. She also desired acceptance in Cainite circles as the elder that she rightfully was. Neither had any interest in challenging the charismatic Baron’s authority, and they brought their mastery of Obfuscate to the table as a bargaining chip.

They were readily accepted, although Urbien’s hot temper, impious humour, and sarcastic remarks often earned Baron Thomas’ stern rebuke, even now. He was a valuable part of the team, however, and it is said that Urbien the waif knew Constantinople’s secret ways and her streets better than any other Cainite, even Malachite. Agatone lost her battle with the Beast decades ago, and met the dawn before the Wassail could take her. Urbien’s grief over her loss never diminished, but he continued to stand by his baron and the Dream.

Urbien despised the Latins for what they have done to his home. He was accused of taking part in the Latin Riots of AD 1182 and slaying several of the Italian Cainites in the confusion, but it was never proven. He rarely turned down a chance to make trouble for the Latins, though, and was rarely far from the borders of the Latin Quarter, attacking any Latin that he found hunting in the Greek districts without leave. It is said that he gave the Final Death to no less than nine foreign vampires that he found in this manner, but Urbien was always tight-lipped about his more violent side, so the truth of the matter will likely never be ascertained.

While trespassing in ignorance of the Codex of Legacies, Sir Gunthar received a surprisingly congenial greeting from Urbien. The waif taunted, insulted, and finally conned a few obols out of the Latin Gangrel, making a half-hearted and snide pledge to introduce the knight to the baron in return. Unlike many of his fellows, he did not warm to Gunthar at all in the months that the Saxon spent among the Baron’s Gangrel, voicing his distrust of the foreigner on several occasions. However, years later when he discovered that the knight had perished in service to Thomas Feroux in the early months of the Fourth Cainite Crusade, the sullen ancilla is reported to have spoken uncharacteristally generous words to the memory of his fallen clan-mate.

Urbien fought against the depredations of the Fourth Crusade on every front, with every fibre of his being, and when the city fell and the Great Sack commenced, he slew many of the mortal invaders at least one enemy Cainite. He answered his master’s call on the second night of the chaos, and so he was present for the disastrous defeat of the Baron’s Gangrel at the hands of the Cainite Crusaders under Duke Guy. Urbien was shocked to see Baron Thomas succumb to Rötschreck and flee the field, and he quit the battle in dispirited confusion just moments later. He was also reportedly present the following night when the baron and Justinian fell out and the family was dissolved.

Over the following months, Urbien did everything he could to revenge himself, the Dream, and the Queen of Cities upon the Latins. He “disappeared” many soldiers, knights, and clerics, murdering them and carrying them below into the sewers and cisterns to dispose of their corpses. Eventually, his fellow Cainites discovered his crimes in August of 1204, and not even he could escape the dragnet of Latin vampires that hunted him throughout his own city. Urbien was forced to abandon Constantinople and seek refuge elsewhere, and rumour has it that he eventually joined up with the caravan of refugees that left Adrianople for the West in 1207. If so, it is more than a little ironic that this arch-hater of the Latins is likely now existing among them in their own homelands.

Embrace: He has said that he was brought across late in the reign of Leo the Wise, meaning that Urbien was Embraced in the first decade of the 10th century.

Lineage: Urbien is of the 9th generation. He was the childe of Agatone (d), who herself was the progeny of Harbees, an elder who haunted the streets of the city of Heraklia Perinthus for centuries, but now resides in the city of Nicaea. Urbien’s further lineage is unknown, although he has proudly acknowledged that he is of the Greek bloodline of the Gangrel, which he claims is descended from the mythical ancient Artemis, who named herself after the goddess of the hunt. Cainite scholars of the bloodlines have instead claimed that the progenitor of the Greek bloodline was Autonoë, a legendary figure in Theban mythology, but Urbien sticks to the story given him by Agatone. 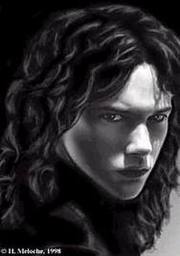