This sorceress served both as the chief mystical support of Marelle's followers and an envoy of her master, the Voivode known as Ioan the Butcher. She is currently at large.

A girl of perhaps sixteen years; pale, pretty and distinctly immodest in her dress sense. She wears nothing but jewellery, a cloak and a loose shift, caring little if her breasts or nethers are exposed. Her curly brown hair is wind-tousled, and humour vies with impious challenge in her dark eyes. She is unarmed.

This adept of the Koldunic Ways hides her great power and malicious cunning within the winsome form of a young woman, twisting others to the ends of the Tzimisce in their Omen War against the Tremere. In this she serves the ends of her mentor, the equally wily voivode Ioan Brancoveanu, also variously known as Ioan the Butcher for the creatively savage means of his vengeance, and the Hammer of the Tremere for his great successes in his campaigns against the Usurpers. Most recently, her duties had Vasilica insinuate herself into the infamous packs of Marelle, the Sculptor of Wolves, and the koldun’s abilities quickly became indispensable to that notorious Fiend in her war against Marusca, the prince of Hermannstadt.

In the spring of AD 1214, Vasilica was first encountered by Svenin the Tall and several members of the Ashen Band. When the Viking approached the Black Cave, lair of the Sculptor of Wolves and her Hell Hounds, Svenin was of a mind to set himself up in Marusca’s place, and stated a willingness to swear the Blood Oath to Marelle as his feudal superior. The Hell Hounds could not know that his ambition was a temporary one for, as the prince of Hermannstadt, he might use the resources of the city to assist the forces of Jürgen von Verden in prosecuting their war against the Cuman warlord known as Kordönül.

When the Viking and his allies arrived at the clearing in front of the Black Cave, they saw Marelle reclining upon a living throne of hell hounds that had slavishly arrayed themselves for her comfort. However, Vasilica drew the eye just as much as her mistress. The koldun, looking like little more than a scantily clad slip of a girl, stood warming her hands right next to a great bonfire in the middle of the clearing. All the vampires present looked upon the Tzimisce witch with awe, for she seemed to stand the heat and the fear of the fire with seeming equanimity.

Rather, as they approached, they heard her casually proselytizing about the old gods such as Perun, Veles, Triglav, Jarilo, and Kupala, claiming that her ability to withstand the flames was among the least of the gifts bestowed upon her for devotion to her faith. The Tremere and the Ventrue, she proclaimed, would tame the wild places where the gods and their servants dwelt, and leech the land and its people of their vitality. She railed at their iniquities at length, claiming they would see the false Nailed God take the place of the true gods, who had watched over the land and protected its peoples for time out of mind. And this, she said, could not stand. She called upon all of her comrades to place the Omen War as their first priority, just as soon as Marusca and her dogs were put down. With the alliance between her “teacher”, Ioan the Butcher and Marelle, the Sculptor of Wolves, the Tremere and all other invaders would lament their crimes against the land at last.

Needless to say, her words left Berengar von Dohna and Ulrich von Wettin aka Heinrich the Hound somewhat uneasy. The latter vampire, ignoring Marius’ hushed admonishments to avoid stirring up the gathered Hell Hounds, approached the bonfire. As blood sweat trickled down his face, the Ventrue stubbornly emulated the witch, fighting the Red Fear as long as he could in the face of her knowing smirk. He withdrew after perhaps ten seconds, while the gathered Tzimisce, Gangrel, and Nosferatu jeered at him.

Vasilica was present for Svenin’s subsequent, solo, visits while he and Marelle hammered out the finer points of his plan to bring in his allies among the Concord so that the Nosferatu of Hermannstadt could finally be thrown down. The koldun calmly watched the Viking with her smug, knowing expression, seldom offering an opinion but always keeping her mistress within arms reach. It was almost as if she saw through the Gangrel, divining the secrets of his treacherous heart, but chose to keep her own counsel regarding his trustworthiness.

Shortly before the Battle of the Black Cave, the ghost Hermann Chriegler reconnoitered Marelle’s caverns for the Concord and, despite feeling uneasy at both the suffering of the mortal thralls he found there and the sense that wards of some sort were present, he discovered that while the koldun appeared to sense his presence, she could neither prevent his entry nor pinpoint his location. Likewise, when Sister Maude Khlesl also stole into the Black Cave immediately prior to the brewing fight, she found that Vasilica was likewise unable to spot her. The Cappadocian did observe that the koldun was able to scry the approaching Concord and several of the Brood, and that she had also given ample warning to Marelle’s packs, who were already in a heightened state of readiness. Her eyes had taken on a verdant green radiance, not unlike the Protean power Witness of Darkness, and her skin appeared to be made of stone. Finally, the very earth next to her seemed to roil and undulate, as if reacting to her moods.

During the battle, Vasilica hung back from the worst of the fighting. She kept a fascinated eye on the struggle between her mistress and Marusca, acting only when it seemed that someone else might interfere. The wounded Nosferatu warrior, Oana, was swallowed up by the very earth as she sought to close to her sire’s assistance. Svenin was on the receiving end of her power also; as he veered too close, Vasilica’s eyes flashed orange and super-heated air coiled about his body not once, but twice, grievously injuring the Gangrel. At that point, Maude acted, dropping her cover of Obfuscate to strike the koldun with the full force of the most devastating power of Grave’s Decay. Flesh withered and dissolved from Vasilica’s body, but the wounded koldun stood firm. Now aware of the Cappadocian, a powerful guardian elemental made of dirt and rock exploded from the roiling pool of earth next to the koldun and struck at the crone.

Vasilica, protected also by the Tzimisce swordsman Klaus, sought to gain some distance from the fray as the tide turned in favour of the Sculptor’s foes. When Marusca’s jaws finally closed about the throat of Marelle then clamped down, the battle was done. The powerful Tzimisce knez, in desperation, mouthed the words “help me!” before exploding in a cascade of dark blood. Transfixed, Vaslica watched as the land itself rose up with fleshy tendrils and appeared to sup on her mistress’ vitae, while Klaus appeared to lose his mind as he charged at the back of his consanguineous uncle, Ghenadie, and sent the villain to the Final Death.

Recognising that the night belonged to the Concord and Brood, the koldun raised her hands in a placatory gesture and, smiling wistfully, she backed away uttering the cryptic words, "A shame. I truly thought she was the one…”

Seeking to withdraw in peace, she called the younger Tzimisce Klaus to her side as the Earth Demon drew up behind her in a protective manner. Continuing to smile in an almost friendly way at her enemies, her slightly smug withdrawal turned into a rout when Svenin the Tall, unwilling to countenance her survival, charged at her headlong. Once more she called upon the Fire Ways to scorch the flesh of the Gangrel but, wounded as she was, Vasilica lacked the strength to finish him with her sorcery. As the Viking triumphantly sought to bear the koldun down beneath his jaws, her Elemental Guardian stepped forward, seeming to envelop her in his great bulk of stone and muck. Svenin received nothing but dirt and frustration for his efforts…

The demon then collapsed back into the ground whence it came, spiriting the witch away from danger in the very bosom of the soil of the Old Country. Unfortunately, it also meant abandoning her talented bodyguard, Klaus, to the unkind and uncertain mercies of the Concord.

Whatever her enigmatic designs in the camp of the Sculptor of Wolves truly were, none among the Concord doubt that they have heard the last of Vasilica. It is likely that the koldun has returned to the side of her true master, Voivode Ioan Brancoveanu, and that she has few kind words to say about the Concord in general and Svenin the Tall in particular…

Embrace: She has been active since the third decade of the 12th century AD, and it is likely she was Embraced shortly before 1120.

Lineage: Childe of Katica (d), childe of Matei Inteleptul (d), childe of Velya the Flayer; further knowledge of the bloodline is lost, and Velya is not talking, but as he is thought to be of the 5th generation, Vasilica must be of the 8th. 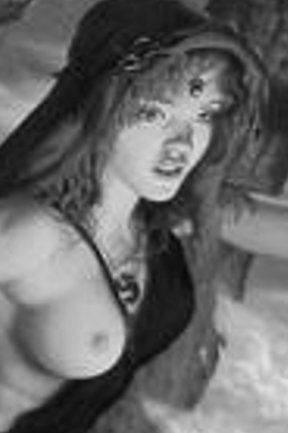