A rare sight indeed, this Ravnos mediator carries messages between the Árpád Ventrue and the Tzimisce Voivodate, seeking a niche for he and his people.

With his dusky skin, glittering dark eyes and curly black hair and beard, this odd character looks like a complete outsider in Western society. His clothes are gaudy and bright, though not ostentatious. He has a dignified yet faintly amused air about him. In recent years, his smile has come a little less readily than before, and his eyes seem troubled at times, but he is ever the soul of gracious generosity.

(Expanded from the character as presented in Transylvania by Night, pp. 92-94).

The ancilla known as Vassily Taltos has functioned as a diplomat and mediator throughout Hungary and Transylvania since the seventh decade of the twelfth century. He and his exotic companions travel the lonely roads between settlements, intimately familiarising themselves with Greater Hungary and carrying messages between the demesnes of the Árpád Ventrue, the scattered knezi of the Tzimisce Voivodate and also the allied cities of the Siebenburgen.

While they are a strange and unfamiliar sight throughout the region, they have for the most part managed to avoid any bigotry or racism from either Cainites or kine. With the noted exception of Buda-Pest (outside of which they have been known to camp for many weeks at a time), they rarely spend more than three nights in any one location. So as not to infringe upon the hospitality of their hosts, they usually seek to entertain and amuse whatever courts they pass through on their travels, and conduct themselves with the utmost dignity and restraint. Those who fail to behave in kind soon learn that such gravity is out of character for these rogues. So far, most parties seem to respect Vassily’s neutral status and leave he and his kin to their own devices. The only exception to this are the Gangrel, who seem to persist in maintaining some ancient grudge against the Ravnos, and on at least one occasion he has had to slip through the net of one of their hunts after a local Gather.

Since the turn of the 13th century, so grand has his reputation grown that he even carries messages as far south as Ragusa and Sophia, if the compensation is adequate. Only the most foolish or savage of Gangrel would dare openly attack him now, lest they suffer the displeasure of dozens of princes and elders in his debt. Even so, Vassily is ever careful, and knows many secret and safe ways to move about with his mortal kin.

Vassily and his people encountered a number of the coterie outside of Pest on the same evening that they were due to meet Prince Vencel. Bernhard Billung (then using the name Sir Gunthar of Sankt Wolfgang) carefully and openly approached the camp of exotic strangers, making sure to be seen. An old gypsy woman and her son took note of his presence, and Vassily eventually made contact with the Gangrel. The two established some ground rules for approaching the Ravnos’ kin, called a kumpaniya of Roma, which included not interfering with their trades, nor feeding upon them or their guests, and never to approach after midnight. While they established that the ancestral hostility between the Gangrel and Ravnos clans was undiminished, there was no need for them, as individuals, to display acrimony towards each other. Vassily and Sir Gunthar than parted ways, as neither friends nor enemies.

Some fourteen years later, the late Sir Gunthar’s grandchilde would encounter Vassily Taltos in Thessalonica. Witness to the vicious attack on Vassily’s “nephews,” Andras and Camlo, Odda was one of several Cainites (including Ulfe and Francisque) who carried the dying Andras to the boat of Sanser. There they would discover Vassily talking with the Ravnos elder, who was revealed to be his own sire. Odda recognised Vassily from the tales that had filtered down from Svenin the Tall and the Concord, and he gladly made the acquaintance of the diplomat and messenger. Together, they would bear witness as Vassily Taltos brought Andras Taragoš across into the Alexandrite family of Ravnos.

Some eighteen months later, Vassily would turn up once more. Visiting the Szekler town of Sepsiszentgyörgy to carry messages from Lord Vencel to its prince, Wiprecht von Lübben, he was delighted to discover that his old friend, Dmitar Saronja, had taken up residence there as well. Indeed, the Brujah had decided to bring across a Hungarian noblewoman, lately widowed from her Szekler husband, and he invited Vassily to witness the ceremony of her Becoming. The Rom was honoured to do so, and over the next fifteen months he stopped in as often as he could to check on the progress of young Helena Korosi.

Sadly, Vassily was also present when Helena and Dmitar’s world came to an end in the form of Kordönül and his band of Gangrel marauders. Speaking with Prince Wiprecht on a warm summer night, the Ventrue suddenly started in alarm as he felt the Summons of Dmitar, a sure sign that the Brujah was in desperate straits. They hastily assembled the prince’s retainers, mounted up, and rode hard to the assistance of he and his fledgeling, only to find Helena galloping madly towards them. She told them of her sire’s order that she flee and bring help, and of Kordönül and the six Gangrel accompanying him, and Vassily, Wiprecht, and Brother Adalbert all realised that they were too few to save Dmitar. Knowing the fight was already lost, and unwilling to risk himself or his own progeny in a futile display of gallantry, Prince Wiprecht ordered a withdrawal.

Fighting despair, Vassily hatched the desperate plan to use his Chimerstry to summon a troupe of Teutonic Knights in full armour, mounted and thundering down the road to assist the beleaguered Brujah. The ploy succeeded in driving off Kordönül and his followers, but it was too little, too late. Dmitar had already perished under the sword of the ceribași.

In the wake of the tragedy, the grief-stricken Helena was told to remove herself to Kronstadt, where she was adopted by her consanguineous cousin, Karsten von Hornburg. Before leaving, Vassily made it clear to her that he would always be her friend, just as he was always friend to Dmitar Saronja. Throughout the following years, as time has allowed he has made occasion to stop by so that he might offer her his advice and services as a messenger.

Lineage: Childe of Sanser, who is the childe of Tibaldo. Vassily and his kin apparently belong to something called the Alexandrite jati. He is of the 8th generation. 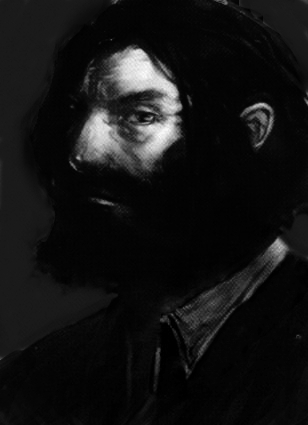