Tzimisce noble of the House of Basarab, Knez of Tihuta Castle and Koldunic Adept of Jarilo.

A pale, rangy Romanian with a slender build and angular features. He is clean-shaven, wears his hair at shoulder-length and has very keen, intent brown eyes. There is an urbane, noble air about the man which is further accented by his damask robes and the quality of the sabre and dagger that are belted at his side.

Veceslav is born into the Comital House of Basarab in a Castle on the banks of the Argeş river. He is the 2nd son of Count Razvan and Mariam Laskainos, an obscure Byzantine noblewoman.

Veceslav earns the patronage of the Tzimisce Knez, Raluca of Campalung, by defeating his elder brother, Costin, in a brutal single combat. He is sent to the Byzantine capital, Constantinople, for an education, and is placed with the other postulants at the Church of Christ Pantokrator. He is soon introduced to the Obertus Order, though he never takes vows or enters the ranks of the Gesudians.

Veceslav elects to remain in Constantinople and continue his education after Count Razvan sends word that Knez Raluca has been removed from her position by their feudal master, Lord Tabak Ruthven. He studies first at the University of Constantinople at the palace of Magnaura before moving on to the Monastery of St. John Studius, where he is introduced to the Library of the Forgotten.

Veceslav Basarab returns to his ancestral lands south of the Transylvanian Alps to find an summons waiting from Voivode Vladimir Rustovitch. He sets off west, past the Apuseni Mountains to the Voivode’s lands, near Arad

Veceslav enters a term of service with Vladimir Rustovitch. He becomes an envoy of the powerful Voivode, witnessing his rise to the apex of Tzimisce political power. His supervisor in his duties was the ancilla Klara Vlaszy Lupescu.

The Obertus Tzimisce call in favours to have Veceslav become their envoy. He is based out of the Monastery of Christ Pantokrator, where he answers to Lord Symeon and his favoured progeny, Myca Vykos. His duties include touring the Byzantine West and the coast of Asia Minor, checking on the health of Obertus properties and smoothing their disputes with other local authorities.

Veceslav is Embraced by the outcast Tzimisce, Gabor the Bulgar, in the Church of Christ Pantokrator in a ceremony attended by Symeon and the rest of the secular leadership of the Obertus.

Gunthar ritter von Wolfgang, Sir Conrad de Monreal, Veceslav Basarab and Iulia of Adrianople meet Sister Maude Khlesl outside Buda-Pest. At the behest of Vencel Rikard and their sires, they head through the dangerous winter snows fo Tihuta Pass to construct a tower. Sir Alaric joins them after Sir Conrad is forced to leave the coterie. 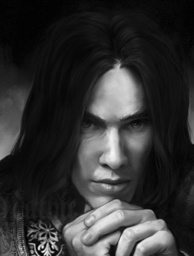