A potent Knight of Blood, tasked with hunting down the secret enemies of the Ventrue. He was driven into torpor by the fugitive Hrothulf in AD 1198, and has yet to recover.

When encountered in the Tihuta Pass many years ago, this hard-bitten undead knight and commander of the Order of Blood was noted for the many scars that marred his face. Perhaps fifty years of age when he was brought across, his brown hair showed patches of iron grey at the temples and through his beard; the deep wrinkles on his face warred with his scars for dominion of his ill-favoured features. He seemed to be a stern and hard creature at the best of times, but locked in battle with the hated fugitives Siegfried and Hrothulf, his visage was twisted into an ugly mask of fury and hate. The quality of his arms and armour spoke much of his wealth. 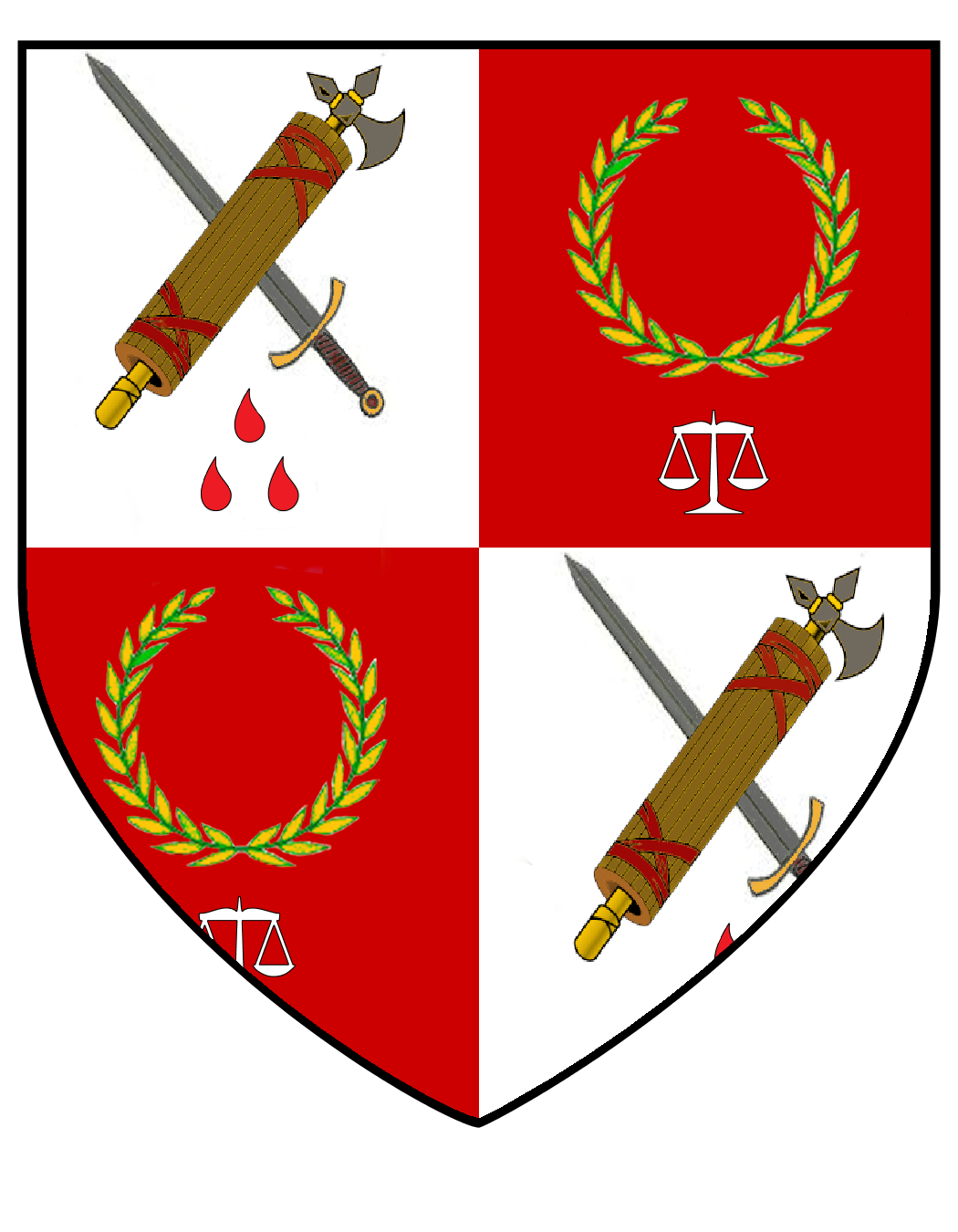 The coat of arms of Virgilio da Cannobio, Cavaliere-Comandante dell’Ordine del Sangue. The sword and fasces above three drops of blood is derived from the centuries-old symbols of the order, now translated into heraldry.

According to the knights, the blood represents the sanctity of the blood of the Ventrue progenitor, oldest among the third generation, who was tasked by Caine himself with ruling and meting out justice in the names of Irad, Enoch, and Zillah upon those who would deny the right of the clan to succeed to their authority. The crossed sword and fasces represent the legacy of the Ventrue role in the Eternal Senate of Rome, and the role of the Knights of Blood in preserving that inheritance throughout the thousands of bloody nights following the fall of the empire.

The golden laurel wreath on a field of crimson is the symbol of his sire, Dominius, Prince of Nice and Lord of Lombardy, Piedmont, and Provence. Finally, Virgilio added the symbol of argent scales to his sire’s badge in order to denote his own preoccupation of bringing justice to the enemies of his clan.

Sir Virgilio of Cannobio was encountered by the formative Concord at the Tihuta Pass late in the winter of AD 1198. Along with his companions Brother Garnier of Cambrai and Walther of Windisch-Gräz, Virgilio and their small army of followers drove the Ventrue fugitives Siegfried and Hrothulf from their haven in the settlement of Regun, near Bistritz, and pursued them into the pass. When one of their horses came up lame, the two elder Ventrue decided to remain behind and make a stand so their mortal retainers and herd stood a chance of escape. Initially sympathetic to their plight and their courage, the Concord were compelled to assist the Knights of the Blood instead by their ally, Alaric of the Templars, who noted Garnier’s own surcoat and shield from their vantage.

The resulting battle was a disaster for the Order of the Blood and the Concord as Hrothulf and Siegfried, both many centuries older than their foes, demonstrated the monstrous damage of which elder warriors are capable. After some initial strides the Concord was quickly neutralised and none of the mortal retainers of the order lasted more than a few seconds. The Templar Garnier fell to the blade of Siegfried, and Virgilio was left to face the Visigoth by himself as Walther fought the bellicose Hrothulf. Despite his decades of preparing for the fight, the young knight of the Blood was immediately outclassed and destroyed with contemptuous ease by the masterful Dane. Virgilio faired better, and had almost bested Siegrfried when Hrothulf intervened on behalf of his friend.

The elder Knight of the Blood was very nearly a match for Hrothulf, and he managed to sorely wound the Dane before the older vampire suddenly struck him in the nethers with the Wolf Claws of the Protean Discipline. Virgilio was not expecting the dishonourable strike, and he was crippled. The Dane had prevailed, though the knight-commander continued to struggle weakly. Hrothulf held the Ventrue knight aloft, tore open his mail, and supped on much of the remainder of the weakened knight’s vitae. He then carried Virgilio over to the cliff’s edge near the tower project, mockingly murmured that “perhaps if his God was kind, the knight might survive to hunt them again,” and then dropped the helpless knight into the chasm below.

The two elder Ventrue then made peace with the formative Concord, briefly spoke with them, and then took some of the horses and supplies of their vanquished foes and rode off into the northern reaches of the pass.

As it happened, though, Sir Virgilio did indeed survive.

Luckily for him, Brother Garnier’s helmet had saved him from Siegried’s vicious strike, though he was thrown into torpor from the severity of the blow. The Ventrue Templar would awaken a week later to find himself in the care of the Concord. Obviously stricken with grief over the loss of his fellows, he was nonetheless stoic in accepting their loss. He remained with the coterie for a further week while he recovered his strength and hunted the remains of Sir Virgilio, and in that time he developed a kind regard for his fellow Templar, Brother Alaric, as well as Sir Gunthar. To them he explained that the Knights of the Blood existed to destroy the enemies of Clan Ventrue, and while the Daeva were chief among their foes, others who were clearly the catspaws of the Secret Masters were also periodically hunted as well. Siegfried and Hrothulf were among these, and his Order would likely continue their hunt once their spoor was found again.

After hearing Virgilio’s name and lineage in the wake of the fight, Sir Gunthar was able to connect the fallen knight with the story of his old brother-in-arms, Sir Guy of Provence. He would tell his allies among the Concord later on that when Guy was a mortal, Dominius of Nice placed a number of nigh insurmountable obstacles before the bastard knight in order to discover his worthiness for the Embrace. Sir Virgilio and his younger consanguineous brothers Sir Gavriel of Bougniac and Sir Hugh of Vernier were the instruments of the ancient Ventrue’s will in the matter, and tantamount to the ceremony of the Becoming, they also tested Guy’s martial skills in a cruel bout of swordplay. Evidently, Guy passed that test.

As a matter of course while they searched, the Templar Knight of Blood told Sir Gunthar and Brother Alaric of the tales of Virgilio and Walther. He explained that the knight-commander was almost an elder in his own right, and that he had joined the Knights of Blood upon the order of Dominius in AD 954. Effectively the prince of the settlement of Cannobio, he eschewed that title in favour of knight-commander of the Knights of Blood, for his castle was the strongest outpost of the order in Northern Italy. His presence and that of three of his subordinates was requested by Sir Walther, whose sire Gracis Nostinus Basso is a noted vassal of Dominius. All of Virgilio’s junior knights had perished in the initial exchange with Hrothulf and Siegfried at Regun, and upon his eventual awakening the knight-commander would need new recruits to rebuild the Order of Blood in Piedmont.

The crafty Gangrel knight was the one to locate the torpid form of Sir Virgilio. As luck would have it, after dashing itself into a broken ruin on the cliffs below the pass, the body of the knight-commander fell into a deep pool and the weight of his armour carried him to the bottom, safe from the rays of the sun. The damage was so grievous that Virgilio might not wake for many years, but he would return. In due course, after giving some advice to Sir Gunthar regarding the course of a true knight, Brother Garnier departed with the torpid, mangled body of Virgilio and the ashes and weapons of Walther.

Lineage: Virgilio of Cannobio is the of the 6th generation. He is the childe of Lord Dominius, Prince of Nice and Lord of Provence, Lombardy, and Piedmont. Dominius is an elder of methuselah vintage, having been Embraced in the first years of the 2nd century AD. He is the youngest known progeny of Tinia, who was one of the first ancient Ventrue to set foot on the soil of the Italian peninsula. Masquerading as their sky-god, she ruled the Etruscans for centuries, and was instrumental in the founding of Rome. She has not been seen in many centuries, and is beloved to rest in the Sleep of Ages. She is the childe of Ventrue. 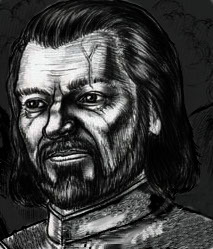