This secretive, powerful and paranoid Tzimisce elder was the Voivode of Régen in Transylvania; he is despised by his more traditional clanmates for his foreign alliances and ways, and scorned by his peers as a failure.

(Expanded from the character mentioned in Transylvania by Night, p. 115, and depicted in Dark Ages Clan Novel Ventrue).

A wealthy nobleman of the East, clad in dark wool and a bear’s-fur cloak. His wavy brown hair and cobalt blue eyes would make him handsome, if not for the arrogant tilt to his head and the cold, inhuman intelligence behind his eyes. He is armed with a sword and a small knife, but he eschews armour of any sort in favour of an antiquated tunic, trousers, and boots. 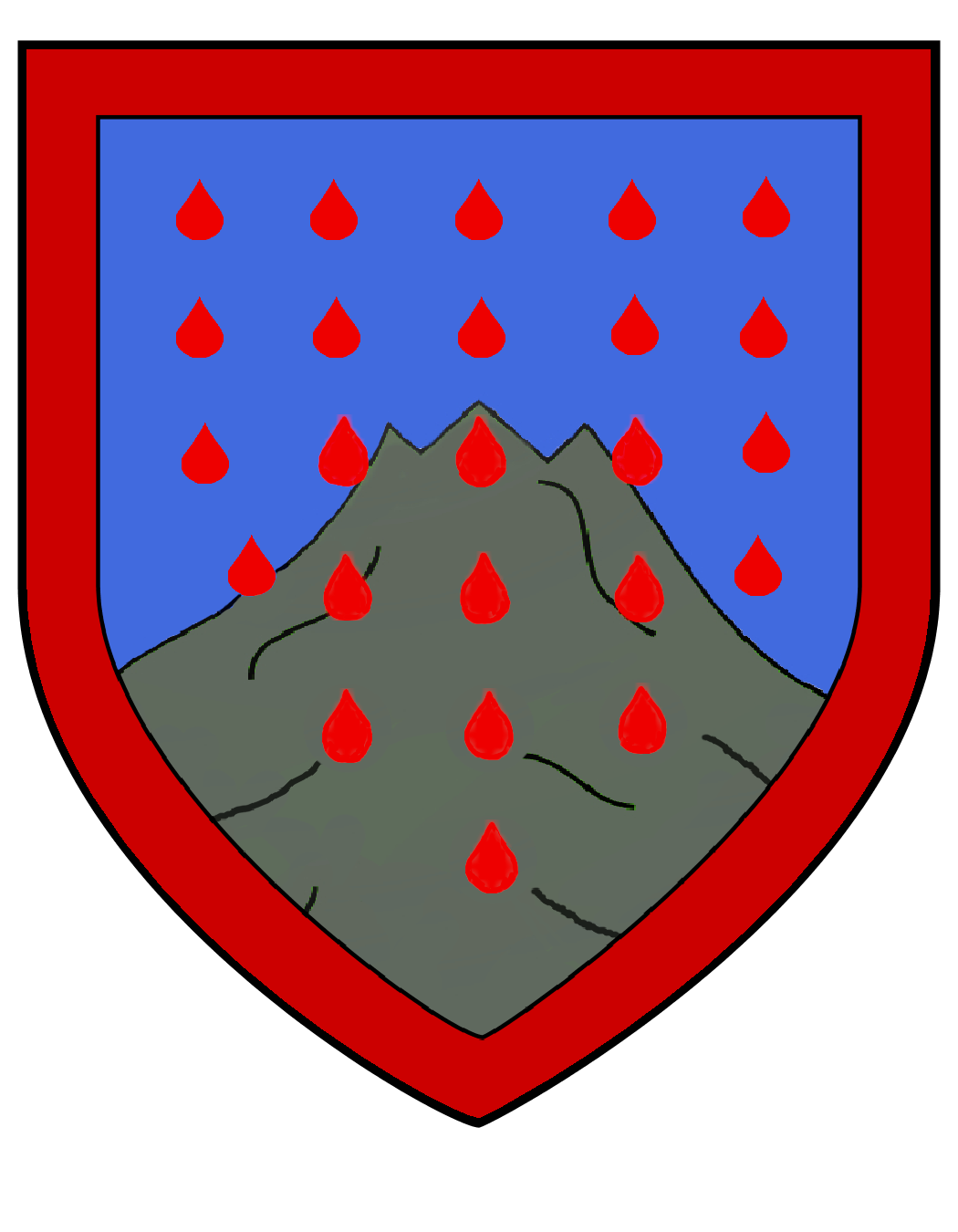 The coat of arms of Visya, erstwhile Voivode of Régen, adopted in the early years of the 13th century in order to fit in with his German and Hungarian allies. Bordered in crimson, they depict a rain of blood upon a triple-crowned mountain.

This potent elder is an outsider among his clan, widely considered to be a failure and a traitor. Until the turn of the 13th century he was also secretive in the extreme, despite his aspirations to carve out a new voivodate throughout northern Transylvania and southern Ruthenia. Among the Tzimisce he is noted as a masterful koldun and credited with the creation of several Revenant bloodlines, the Vlaszy and Grimaldi among them. However, his failed wars against Voivode Gerlo of Suceava and Voivode Ionescu of Mureș are less laudable and his outright cowardice in the face of the threat of Vladimir Rustovich has brought him nothing but scorn from his fellows. Since the late autumn of AD 1214, Visya has abandoned his holdings and gone to ground somewhere in a hidden fastness in the Carpathians.

An elder in his own right, Visya has haunted the Old Country since the nights of the hegemony of the Avar Khaganate over the Pannonian Basin and Transylvania. Back then, among his clan he was thought to be a Metamorphosist, and at the very least he was known for his mastery of the dreadful arts of Vicissitude and his talent with the Koldunic Ways. Unlike the Shaper Priests, however, Visya demonstrated early on his fixation for ruling others, stating that it was all the better for him to secure extensive stocks with which to conduct his experiments. His interest in the medical and scientific advances of Byzantium also marked him as a progressive thinker with little in common with his fellow koldunists, most of whom married their mystical studies to their duties as representatives of the old gods and the spirits of the land.

His lands lay along the Krisos River (now known as the Fekete-Körös to the Magyars and the Crișul Negru to the Vlachs) in a wide northern valley of the Apuseni Mountains. His domain was close to the lands of his teacher, Kosczecsyku, who shared his odd proclivities for simultaneously studying the arts of koldunism and seeking temporal power. Indeed, to his progeny Visya has recalled attending the Ceremony of Becoming for the warrior who would come to be known as Vladimir Rustovich, and he treated with the younger Tzimisce on scores of occasions over the following century before Kosczecsyku fell to the claws of the Umbra Domnii in 983. Vladimir immediately made his play to take his late sire’s lands for his own, starting with a purge of those of his blood siblings who would stand in his way. Two of them, Mischa and Csiskos, arrived at Visya’s court to beg succor soon after. Rustovich’s people followed hard on their heels and, dismissive of the new voivode’s youth and assumption of power, he thought nothing of giving sanctuary to the fugitives and sending their consanguineous brother’s envoys packing.

The insult was not forgotten.

Over the coming decades, Vladimir Rustovich swiftly established himself as the Cainite power throughout the lands of the old mortal Duchy of Menumorut. His dominions and strength of numbers came to dwarf the Voivodate of Krisos, and although Mischa and Csiskos had long since moved on, it was only a matter of time before Rustovitch came for his revenge. And come forth he did. Even with his formidable koldunic tricks, Visya’s voivodate could not hope to match his younger rival in strength of arms and numbers. In such circumstances, it is customary for voivodes to go down fighting or, having been vanquished, submit to ritual diablerie, but Visya shocked the Voivodate by instead taking his closest Vlaszy followers and simply slipping away into the night. Having abandoned his lands without a fight, he thus earned the unmitigated scorn and disgust of the clan, and he vanished into obscurity for many years.

News of Visya next surfaced in the middle of the 12th century, when the diplomat Radu emerged as a power among the newly declared Council of Ashes. Within a handful of years it was clear that the neonate prince of the newly established domain of Nösen had the active backing of his sire, who nonetheless kept his own base a carefully guarded secret. In 1153, Radu and Visya marched a small army from Nösnerland against Voivode Gerlo of Suceava. It would be the first of eight such Trials by War that they would mount against that voivodate, none of which were entirely successful. Once Rustovich was aware that Visya was active somewhere in the area, he instructed his progeny Vlad Ionescu of Mureș to harry the rogue and the progeny he was setting up throughout the region. One of them, the unfortunate Sergiu Lazar, would be forced to serve as a brutal declaration of Ionescu’s hunt, and it would take him some years to recover.

As the conquests of the Council of Ashes mounted and the knezates of Transylvania were humbled by the Hungarian Ventrue, Visya grew bold enough to step out of the shadows enough to let it be known that it was he behind the assaults on Gerlo of Suceava. He based himself in the village of Régen some thirty-eight miles south of Bistritz, though it would later become clear that the domain had been set up as a smokescreen for his true stronghold in the mountains to the north-east. In fact, for a number of years in the 1190s he “tolerated” the presence of the two Ventrue fugitives Siegfried and Hrothulf in the town, precisely because he knew that their meddling would make others disregard rumours of his own activities there.

It was fortunate for Visya that Rustovich was busy consolidating his gains over the Árpáds and dealing with challenges from rebellious nominal vassals that refused to accept his ascension to the rank of Voivode among Voivodes. As such, the rogue voivode was free from direct conflict with his hated enemy, and needed only deal with Ionescu. Throughout the 1170s and 1180s, the Voivode of Mureș launched a number of Trials by War against Régen in expectation of destroying what he presumed was the centre of Visya’s power. These campaigns failed, but by 1190 it was clear to Ionescu and his allies that Visya might use Régen, but his stronghold was elsewhere. Worse, Visya’s own hatred had been aroused, and he desired revenge on Ionescu. To this end, he allied firmly with the domains of Schäßburg and Mediasch in their war against the Voivode of Mureș. At first he offered his aid through his progeny Sergiu, but in 1210 and 1211 he actually sent his szlachta, revenants, and mortal thralls into battle.

In the summer of 1214, the alliance against Ionescu finally bore fruit with the addition of Jürgen von Verden’s Order of the Black Cross to their forces. Within months, the war against the vampires of Mureș had been won. In keeping with their deal with the bürgers of Kronstadt, the men of Schäßburg and Mediasch then marched south to assist the Burzenland against the Cumans. The north returned to peace, and Visya, Radu, and Sergiu hoped for some breathing space to lick their wounds and recover their strength.

Such was not to be. In the last weeks of autumn, Rustovich finally marched on Transylvania. His timing was perfect. The Cainites of the Council of Ashes and the Burzenland were weakened by years of struggle or otherwise heavily engaged in the south. Almost immediately, the isolated city of Klausenburg was in his hands, and he was marching directly for Régen and Bistritz. And once again, Visya’s courage failed him. Or, as he might proclaim, his courage to preserve his legacy prevailed him. He took his closest retainers and fled Régen without a word, ordering Radu and Sergiu to abandon their own domains and join him. Approached in advance with assurances by Rustovich they both disobeyed, preferring to take a knee, drink the blood of the Voivode among Voivodes, and return to the fold of the clan.

Defeated again, Visya has vanished once more. The servants of Rustovich seek him in the mountains, the valleys, and the forests of Transylvania, but he seems to have slipped his enemy’s net once again. Neither his current location nor his designs are known. However, Visya is old, he is cunning, and he is patient. His designs take centuries to come to fruition, and it is quite certain that he will emerge from his obscurity to plant his banner once again.

Embrace: Thought to be some time in the middle of the 5th century, for by the time the Avar Khaganate was established, Visya was already quite experienced in the cruel games of his clan.

Lineage: Visya is of the 6th generation. He is the childe of Flaviu (d), childe of Ionache (d?), childe of the Eldest. 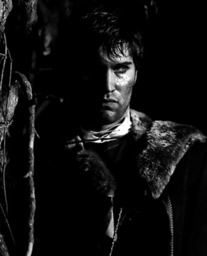