Zivak "Vlk Zabijak" (the Wolf-Killer in Serbian) is a Gangrel ancilla, and the loyal progeny of Tohumir the Wend. He has a strong relationship with his Beast, and excels at channeling it and "riding the frenzy".

A tall, fearsome, bearded Slav garbed in a cloak made of grey wolf fur, complete with a skull headpiece. Three long furrows mar the jowls of the headpiece on the right-hand side. A light shirt of mail covers his leathers and furs, and he is armed with a spear in addition to the knife at his belt. Scars beyond count criss-cross his arms, hands and chest, which are so hirsute as to seem furry. There is a certain magnetism to the man, as if he is used to leading others into battle.

In the early spring of AD 1198, along with Tohumir and Sobeska Zivak the Wolf-killer attended the Gangrel Gather in the mountains north of Bistritz. There he sought his sire’s approval to challenge Bernhard Billung in the rites of status. Calling him a betrayer and kin-slayer, Zivak sought to ensure that the new arrival walked away from the Gather friendless and alone. Rather than fight honestly, the Saxon instead goaded Zivak’s Beast with his taunts and avoided a straight-up fight. Eventually, Zivak did lose control of his Beast and so lost the rite, but the injuries that he inflicted upon the knight while in uncontrolled frenzy effectively won him the fight. Bernhard would have likely gone to the Final Death if not for the intercession of Arnulf, Dragos, Grandfather, Milov, Mitru, Lorea and Nicoleta, all of whom dragged the combatants away from each other.

The humbled Wolf-Killer spent much of the rest of the Gather in the nearby forest, figuratively licking his wounds and seeking to regain his composure and settle his Beast. It is known that he rarely loses control when ‘riding the Beast’, and he has a good reputation among the walkers of the via Bestiae. His pride was certainly wounded by the cautionary tales of his loss of composure in this instance, for he knew that they would travel to other Gathers in the years to come. At the end of the celebrations, he joined the failed Revel against Durga Syn and Vassily Taltos, although his wounds precluded him being terribly useful.

Like his sire and Sobeska, his childe, Zivak once performed as a scout for Dominic of Timișoara. They did this for several reasons, but the most important one was the opportunity to hone their skills in the ceaseless war that the Brujah warlord waged against the Árpáds. He was an enthusiastic fighter against the Hungarian Ventrue, and not a few invading Tzimisce also felt the sting of his claws throughout those glorious years. Most importantly, however, Zivak apparently slew a werewolf in single combat in 1193. When Dominic vanished at the turn of the 13th century, though, the three Gangrel drifted away from Timișoara, finding none of the remaining Brujah there to be worth their time.

At yet another Gather on a hill overlooking the ruined and savaged town of Ploiești in 1214, Svenin the Tall discovered that Zivak and Sobeska had joined with the savage Cuman Gangrel known as Kordönül Khan. They were both enthusiastic supporters of the merciless warlord, and when Sobeska stalked to the middle of the clearing and expressed her hopes that the Cuman hordes would tear down the walls of Kronstadt, butcher the Burzenlanders, and send Jürgen the Sword-bearer and his minions to Hell, he seemed quite proud of her. Both Sobeska and Zivak were defeated by Svenin in the rites of challenge, and other than the Wolf-Killer expressing his regrets that he did have the opportunity to destroy Bernhard Billung himself, he welcomed the Viking’s presence and complimented him on his prowess.

Like the rest of the Devil Khan’s supporters, Zivak returned to his wanderings after Kordönül vanished late in the autumn of 1214.

Embrace: If his boast is to be believed, Zivak was brought across in AD 1127.

Lineage: Childe of Tohumir the Wend, Childe of Blazej the Bloody(d); of the line of Velatorix the Averni (d) and Burrukam the Stranger, Childe of Ennoia.

Zivak’s Boast (in AD 1198): “I am Zivak, called the Wolf-killer in the tongue of the Serbs. I am the childe of Tohumir the Wend, of the people of Velatorix of the Averni. I have seen seventy-one winters with the Blood, every one of them a true Gangrel.” His lip curled with disgust at the Saxon, and his voice gained volume as his tirade gained pace. “I have slain a Lupine with these claws, and I have strengthened myself with it’s blood. Ventrue and Tzimisce have fallen before me, and countless Christians have slaked my unending thirst. 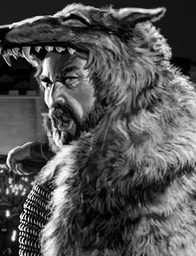